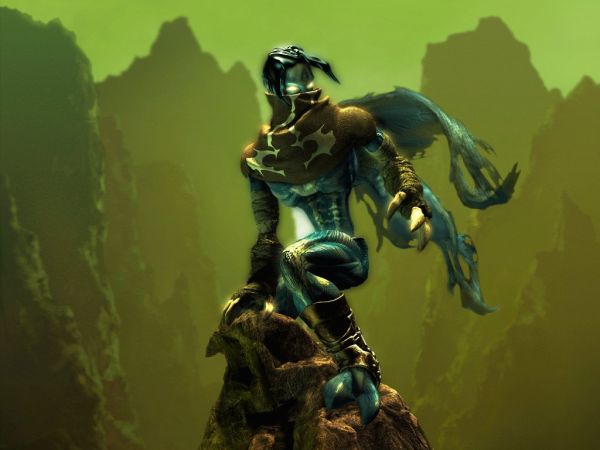 If Legacy of Kain: Soul Reaver is any indication, Nosgoth isn't pretty anymore and neither are you. The once fertile land has become a vampire breeding ground thanks to Kain and his decision to conquer the realm rather than save it. Worse than that, evolution has not been kind to Kain's kin. Many of his sons' cronies have transformed from dignified creatures of the night to spindly-legged menaces, amphibious monstrosities, and apparently anthropomorphic feces. As for you, his beloved Raziel, well... Kain has inexplicably torn off your wings and ordered your execution by way of a watery grave. There you lost your lower jaw and most of your epidermis, but on the upside you've gained a suave hairdo and the ability to devour the souls of your foes. I'd say it's a fair trade!

One of Soul Reaver's main draws is its stability, which you can see in one of the game's core concepts: the ability to shift from a spiritual dimension (the "spectral realm") to the physical world (the "material realm"). Making the leap is mind-blowing, even to this day. When you venture into the spectral realm, the objects around you warp, twist, and seemingly melt. The shift grants you access to certain chambers and regions that would be otherwise barred in the material plane. I'm still thrilled by the smooth transition from one form of existence to the next, even playing the game in 2015. Groan all you want. 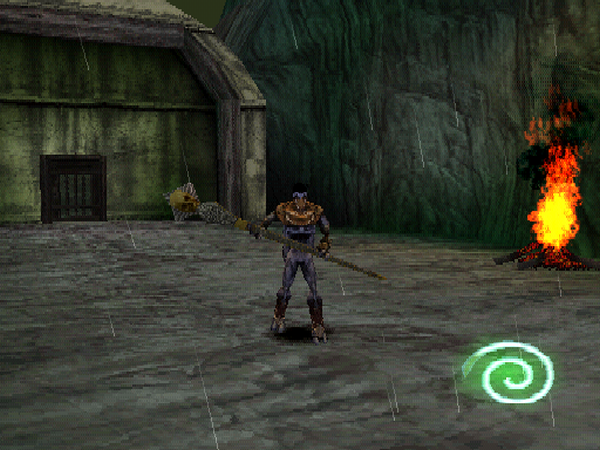 "It's an original PlayStation game," you might reasonably predict. "That means you're going to have to sit through long load screens or a ridiculous amount of slow down!" But no, you actually aren't. Crystal Dynamics designed Soul Reaver to be a stream-loaded title, meaning it's constantly loading bits of the environment. Some might bellyache that this leads to the fog you'll encounter throughout the game, not realizing that a horror-tinged title such as this one actually benefits from the limited range of vision because it adds a sense of dread and desolation. The stream loading is, in other words, a pure win for Soul Reaver.

And although it's a persistent and intriguing part of the game, noshing on souls isn't even the best part. More fun still is extracting them from the opposition. Soul Reaver is basically a brawler, sans enemies who collapse, emit an awkward scream, and blink several times before disappearing. Your targets in this outing are functionally immortal and therefore require more than rudimentary punches to fell. A handful of blows may stun a vamp, but only through outright murder can you silence it for good and dine on its sweet, sweet soul. This is where Soul Reaver's extensive list of weapons comes in, providing you with a variety of pipes and spikes for impaling, torches and sunlight for immolation, and bodies of water that serve as acid pools. Later on, you can also acquire the game's namesake and blow your brothers' goons to bits.

Although scuffles are pretty common, they're not the game's focal point. This becomes apparent when you realize how often your path branches and how many times you run afoul of inert blocks on the ground or switches and levers. You might then understand that exploration and puzzles share the spotlight with combat, and that's a relief because I don't believe Soul Reaver's execution system could have carried the entire game alone. 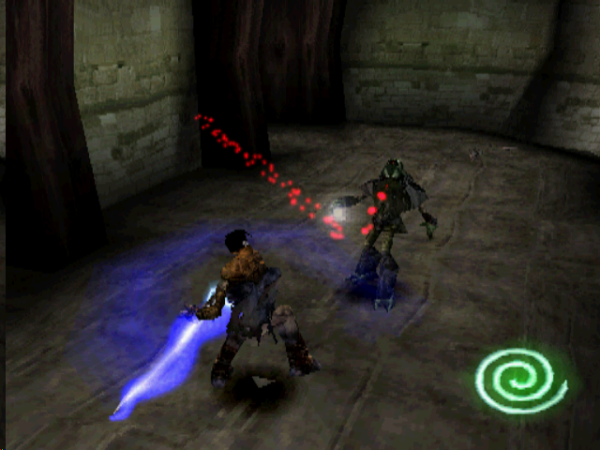 This time around, Nosgoth consists of several large pathways and hidden side routes littered with structures such as monasteries and temples, many of which are optional. Some locales even hold glyphs (read: spells) that allow you to conjure vampire-eradicating powers such as fire and sunlight. The main fortresses, though, contain not only your undead brothers, but truckloads of puzzles and challenges to surmount. Each of these dungeons also emphasizes one or two facets of the game. For instance, the Drowned Abbey is all about platforming. Failure to land on the area's minuscule floors or objects results in you landing in the water and dissolving. Another stage, the Silent Cathedral, tends to focus on throwing switches, engaging in altercations, and pushing blocks.

One of Soul Reaver's few missteps is the overabundance of block puzzles, which harms the overall pacing. Most such riddles provide you with several cubes to shove, which chews up a fair chunk of time. To make matters worse, many of these puzzles require you to flip bricks into just the right position, mainly so you can fill in the missing pieces of a mural. As you can imagine, it takes time to roll the bricks this way and that before you have everything in the correct position. Only then can you sloooowwwly drag the block to its intended location.

Thankfully, the game sets you up with more scenarios than just cube pushing. One of my favorites involves switching back and forth between the spectral realm and the material realm in order to ascend a series of awkward ledges, which transform based on the realm you currently inhabit. I also appreciate the game's boss encounters, which are glorified puzzles. In taking on Rahab, for example, you won't find yourself throwing a single punch. Defeating this guy requires you to observe your surroundings and make use of your abilities to manipulate stimuli. That might mean breaking windows, setting objects ablaze, or throwing switches at just the right moment. 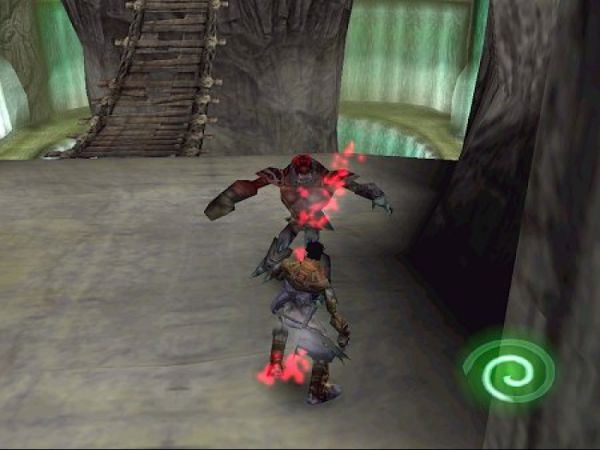 It's rare that a PlayStation game wows me these days. Most titles I've purchased from that era don't impress me nearly as much as they used to. The late '90s were a transitional time, when visuals had advanced beyond sprites but were temporarily trapped in an era rife with blocky character models and gross pixelation. On top of that, many of the games featured on the original PlayStation were too complex for the platform's controller, which led to some atrocious button schemes. Don't even get me started on the number of PlayStation games that seemed to take years to load. Soul Reaver is one of the few products with presentation that, though not especially beautiful, befits the game, with a control scheme that is both sensible and intuitive, and which runs without a snag. Add all of that to the game's engaging dungeons and cathartic brutality and I don't know that you could really expect much more from an action game on this hardware.

If you enjoyed this Legacy of Kain: Soul Reaver review, you're encouraged to discuss it with the author and with other members of the site's community. If you don't already have an HonestGamers account, you can sign up for one in a snap. Thank you for reading!

© 1998-2021 HonestGamers
None of the material contained within this site may be reproduced in any conceivable fashion without permission from the author(s) of said material. This site is not sponsored or endorsed by Nintendo, Sega, Sony, Microsoft, or any other such party. Legacy of Kain: Soul Reaver is a registered trademark of its copyright holder. This site makes no claim to Legacy of Kain: Soul Reaver, its characters, screenshots, artwork, music, or any intellectual property contained within. Opinions expressed on this site do not necessarily represent the opinion of site staff or sponsors. Staff and freelance reviews are typically written based on time spent with a retail review copy or review key for the game that is provided by its publisher.