This is an experimental era, one in which game developers often employ various styles and themes as they attempt to deliver a heartfelt message and maybe produce a standout title in the process. The quality of the resulting products typically can be ascertained by asking a simple question: are those artistic aspirations built on a firm foundation? It's unpopular to say it these days, but sometimes games can offer grand vistas, great intellect and compelling artwork, yet still fall flat because they came together around a mediocre core. To wit, Toren...

Visually, the game hearkens back to the much-loved PS2 adventure, ICO. Excellent scenery and character models resemble an animated film rather than your standard video game. The ruined tower that serves as Toren's setting boasts not only half-crumbled courtyards and smashed staircases, but holes that usher in brilliant sunbeams which illuminate the lush vegetation slowly taking over the fortress. Entering dreams, as well, displays an appropriate amount the developer's talent for creating beauty and grace. There are gorgeous reflective floors, stormy horizons, and fiery locales. Moonchild, the protagonist, also takes on various forms throughout the quest, alternating between a chubby-kneed toddler and an enraged warrior complete with tangled hair and fearsome face paint.

The art style pairs nicely with an excellent soundtrack that perfectly sets the mood for the adventure. Stringed instruments capture the wonder and grandeur of many scenarios, while underscoring the peril that Moonchild faces. The song "Springtime," which plays when our heroine is still a youngster, exudes the innocence of youth. In contrast, "Waltz of the Fallen" is an ire-raising tune that represents her struggle against the game's principle antagonist: a nameless, menacing black dragon. Each magnificent cut is as expertly placed as it is composed and performed, giving the game a rich artistic touch. 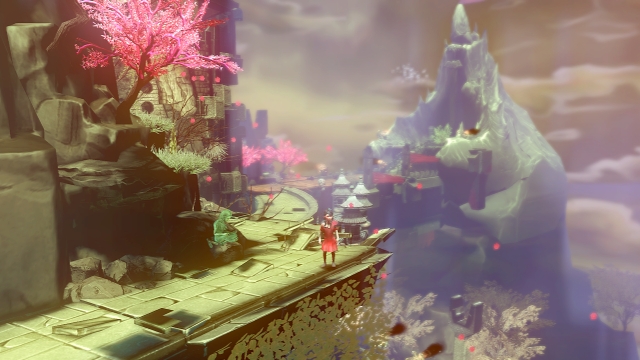 For these strengths, I wish I could award Toren five stars and ride off into the sunset. I'd love to say there's more to this alluring quest, that its beauty isn't let down by shallow mechanics and a ho-hum campaign. Sadly, though, the beauty is only skin deep.

Toren asks players to spend plenty of time running around and investigating stimuli, but it offers very little actual interaction. Yes, there are a couple of scenes where you must give the villain the slip or cut through his ebony skin, but it's all for cinematic value. Fighting the beast doesn't present much of a challenge and feels more like a formality. You have to fight the creature out of obligation, so the show can go on, but it doesn't feel like an actual threat.

If you were pining for even primitive swordplay, you're going to be disappointed. Despite the claim that the tower is "filled with monsters," you don't actually encounter many foes. Besides the dragon, you occasionally run into some crawling armored critters that that perish with a modicum of effort. For that matter, you don't even need the blade to dispatch them. So that leaves us with a massive bestiary of zero non-boss monsters to fend off with the sword. A person has to wonder why Toren even features combat mechanics in the first place. 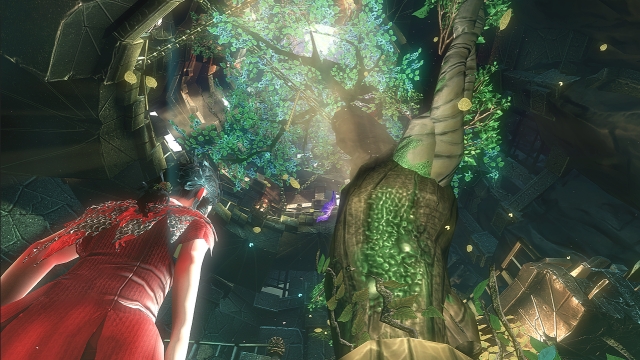 You'll encounter a handful of puzzles throughout the campaign, as well, but these require minimal intellect to surmount and they're awfully familiar besides. For instance, a few scenes require rudimentary block pushing exercises before you can advance. Bear in mind that by "rudimentary," I mean you shove an object a whole three spaces or so in order to solve the riddle. Worse than that is a torch-lighting event that occurs late in the campaign, which isn't all that difficult except that it's time-sensitive. For the most part, the game provides you with more than an ample amount of time to set each torch ablaze, and places few obstructions between each one.

The only puzzle I encountered that could be considered a legitimate brain teaser involved traversing a pitch-black region in one of Moonchild's dreams. Now and then, the game throws you a bone in the form of a lightning flash (a la Ninja Gaiden II), but here the wait time between strikes is excessive. In other words, you spend a long while staring at a dark screen, waiting for a clap of thunder and the resultant brief bit of light to show you what amounts to five seconds' worth of ground to cover. It's either that, or you guess at where the route lies. 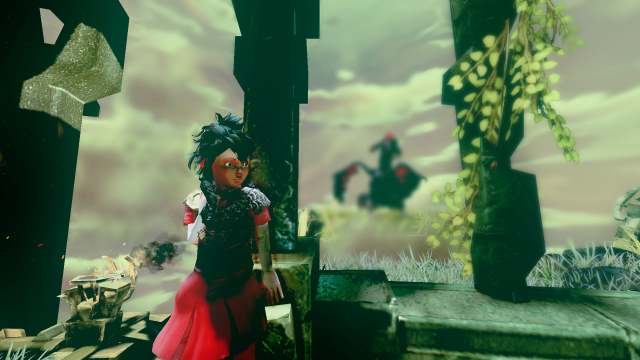 I ended my playthrough of Toren with a shrug. For all of its build-up, the game lasts in the neighborhood of only two or three hours. I suppose I would say I wanted more, but I wasn't all that into what was already there. Were I actually a fan of the experience, though, I probably would have been let down by its brevity. Some might argue that anything the developers could have added would simply amount to padding. However, given the lack of meaningful combat or decent puzzles and interaction, I'd say concerns related to filler are the least of the potential woes.

Does Toren feature a lot of symbolism? Absolutely. Does it boast forward-thinking themes? Lord, yes! Is there much in the way of narrative depth? That's debatable, but I felt there was enough to satisfy. Is it an entertaining game, though? Not really. You could say a title like this isn't supposed to be fun, only meaningful. Well, I've said it before and I will again: why can't it be both? I guess if you're happy to look past actual entertainment value to enjoy visual splendor, aural brilliance, and/or thematic or philosophical elements, give Toren a try. If you're like me and expect more from a video game, though, leave this particular tower to crumble

If you enjoyed this Toren review, you're encouraged to discuss it with the author and with other members of the site's community. If you don't already have an HonestGamers account, you can sign up for one in a snap. Thank you for reading!

© 1998-2021 HonestGamers
None of the material contained within this site may be reproduced in any conceivable fashion without permission from the author(s) of said material. This site is not sponsored or endorsed by Nintendo, Sega, Sony, Microsoft, or any other such party. Toren is a registered trademark of its copyright holder. This site makes no claim to Toren, its characters, screenshots, artwork, music, or any intellectual property contained within. Opinions expressed on this site do not necessarily represent the opinion of site staff or sponsors. Staff and freelance reviews are typically written based on time spent with a retail review copy or review key for the game that is provided by its publisher.