Nintendo is responsible for two of my favorite game franchises, Super Mario and The Legend of Zelda, but it still took me a really long time to purchase the Wii. I spent nearly 30 years utilizing regular joysticks and control pads, so the system's motion-controlled style of play seemed more like a gimmick than an evolution that was likely to enhance my enjoyment. That's part of getting older -- you become increasingly resistant to change and want good things to remain, more or less, the same as ever.

Sometimes, such misgivings have root in something more substantial than a fear of change. In Super Mario Galaxy, the motion controls are for the most part simple, fun and intuitive, but I still would have been more comfortable with a standard controller. Unfortunately, Nintendo sometimes tried to be cute and build stages around the motion controls. For instance, Mario would jump onto a large ball and I had to hold the nunchuk vertically and tilt in one direction or another to roll along the desired route. Or he would race manta rays, with the controller being used to steer his mount along the desired course. The controls in such instances felt fiddly and imprecise, which led to numerous deaths as Mario inadvertently fell off the stage.

At least such stages are optional. Though Super Mario Galaxy offers a lot of challenges, a player needn't conquer them all. After a barebones plot sequence at the introduction (Bowser kidnaps the princess and plans to add galactic conquest to his agenda), you'll soon find yourself in a six-room hub area. Those chambers host portals leading to wildly varying galaxies. By completing galaxy levels, you obtain stars and unlock still more galaxies, leading up to a fight with either Bowser or Bowser Jr. and gaining you a bigger star when you win, so that you can reach the next room of galaxies.

You only need to collect 60 of the 120 available stars to gain access to the final battle. This means you can pick and choose, at least to some degree. Though some galaxies only contain one star, many boast far more than that. In those larger areas, you'll have to gather stars sequentially, much like going from level 1-1 to 1-2 and 1-3 in "old-school" Super Mario. Many of the larger galaxies also possess hidden stars you can find by taking alternate routes, and then there are the comet challenges which are the very definition of "optional" and tend to revisit older challenges in a way that makes them trickier. You might have to defeat a tough boss without getting hit even once, or race through a level against a clone of Mario who happens to know the course like the back of his hand. A few special tasks also pop up, such as a mandate to collect large numbers of purple coins. Or, after rescuing Luigi from his confines in a particular galaxy, you may need to find him in other ones and obtain special stars that unlock special, super-challenging courses revolving around the motion controls. 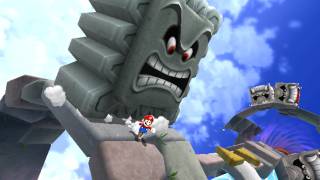 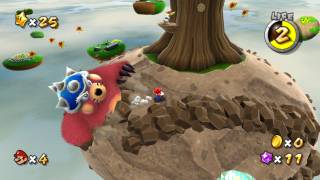 If you do everything and earn the 120 stars, your reward is that you can play through it all again using Luigi. After doing everything once more with the other brother, you'll reach the game's true ending. This is the sort of title that's fairly easy to beat, but really tough to master. You'll need intimate knowledge of many levels, as well as proficiency with the controls and, of course, very good reflexes. If this game had released 20 or so years ago, I probably would have had a lot of fun mastering everything, but these days I'm no longer inclined to put in the work required to thoroughly complete most games. This one was no exception.

I probably should take a moment now to note that, despite the general tone of this review so far, I didn't find Super Mario Galaxy to be annoying overall, or a step back for the series. Like its predecessors, it is tightly made to the point where you can occasionally just "feel" everything in a level's design coming together smoothly. Every moving platform and monster is perfectly located and moves at a precise pace, so that once you do learn a level, you can repeatedly speed through it with ease. Characters and locations are timeworn enough to be instantly recognizable, regardless of how things are portrayed on the screen.

That last point is especially important when it comes to Super Mario Galaxy, because Nintendo seemed eager to use the Wii's hardware to create something vividly different from previous outings while retaining that sameness at heart. The galaxies initially bear little resemblance to the levels featured in classic games in the series, tending toward clusters of small planets. Power-ups are uncommon and are used mostly to give Mario new abilities to clear levels, instead of allowing him to clear out Goombas and their pals. Instead of being currency that counts towards extra lives, coins are used to replenish health. Speaking of extra lives, you get the idea Nintendo knew guys like me might be less than cool with some of the game's controls, as most of the trickier areas offer easy-to-nab extra lives. If you perish a few times, you can keep trying until you succeed.

Despite those differences, the execution feels familiar overall. After zipping from planet to planet, you might find yourself looking at a classic side-scrolling vantage point where you're engaged in retro platforming for a little while. I think that's the biggest success of this game -- with most galaxies containing multiple planets and with those planets tending to offer different challenges, oftentimes obtaining a particular star feels more like you're navigating a series of small levels instead of clearing one large one. One minute, you'll be collecting five pieces of a star in order to form a launch star while dodging obstacles and adversaries; the next, you'll be inside a small fortress reminiscent of similar structures in 8- and 16-bit Mario games. 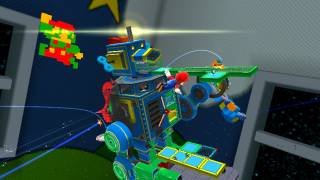 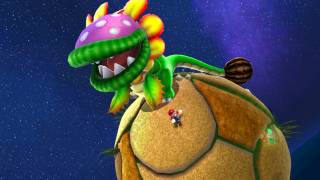 And no matter how frenetic the action can get at times, Super Mario Galaxy still maintains the series' customary light-heartedness, with several stars earned by winning friendly challenges against various characters (well, as "friendly" as a challenge where you lose a life upon failing can be). Is there some dissonance, going from storming a gigantic battleship to a swimming meet competition against cheerful penguins? Yes. Is it fun? No doubt.

And that is the game in a nutshell. Yes, the motion controls were sometimes annoying. Yes, a number of stars were recycled challenges with only slight alterations. But, overall, any negatives pale in comparison to the bulk of the experience, which was fun, entertaining and whatever other positive adjectives you wish to throw into the mix. The sheer variety in galaxies, in boss fights and in objectives from level to level kept my interest and made me want to obtain just one more star so I could see what came next. Mario games have a way of doing that to me and this one was no exception. Despite the changes, things are pretty much as they always have been after all...
4/5

If you enjoyed this Super Mario Galaxy review, you're encouraged to discuss it with the author and with other members of the site's community. If you don't already have an HonestGamers account, you can sign up for one in a snap. Thank you for reading!

© 1998-2021 HonestGamers
None of the material contained within this site may be reproduced in any conceivable fashion without permission from the author(s) of said material. This site is not sponsored or endorsed by Nintendo, Sega, Sony, Microsoft, or any other such party. Super Mario Galaxy is a registered trademark of its copyright holder. This site makes no claim to Super Mario Galaxy, its characters, screenshots, artwork, music, or any intellectual property contained within. Opinions expressed on this site do not necessarily represent the opinion of site staff or sponsors. Staff and freelance reviews are typically written based on time spent with a retail review copy or review key for the game that is provided by its publisher.