Since I've reviewed a few indie titles in recent times, I've noticed I have a habit of mentioning that I only paid $1 or $3 or whatever for those games. There is a legitimate reason for that, as those indie titles really shouldn't be judged on the same scale as, say, a major blockbuster. For the most part, they're made on a small budget by a tiny handful of people and possess graphics that wouldn't be out of place on the NES or SNES. If I spend $1 for an indie title and get three hours of decent entertainment, that game served its purpose more than a $50 major release that didn't click with me -- even if that costlier game possesses the sort of technological sophistication that resides beyond an indie developer's wildest dreams. The simpler might not be as good a game on many levels, but if it provides more bang for the buck, it deserves to be rewarded accordingly.

It's a different story when I'm playing a game released by a major company and thinking I could have gotten the same value by perusing the XBox Marketplace with $1 in hand. And so begins my review of Yume Penguin Monogatari. Konami made this game, which never was released outside of Japan, in 1991, and it is short by most standards. After a brief tutorial that teaches you the basics, there are only six stages, with none being remotely lengthy. While this platformer is competently made, there's very little content. If not for a premise resting squarely in the "no wonder this never came to the U.S." realm, this would be a very short review. 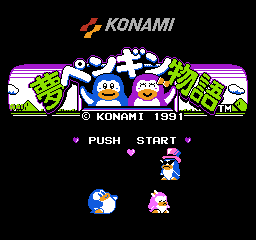 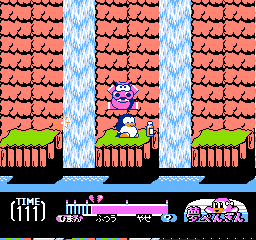 Fortunately, at least Yume Penguin Monogatari made me laugh thanks to its over-the-top fat-shaming. As the game's name may indicate, you will be controlling a penguin. Or, to be more precise, a fat penguin. A fat penguin whose girlfriend dumped him for a more fit (if obviously sleazy) counterpart, solely due to his obesity. Because your penguin's self-esteem is as soft as his midsection, his reaction to being welcomed to Dumpsville is to slavishly attempt to shape his body to her desires by attempting to quaff as many bottles of Fat-B-Gone as possible.

Basically, this game has you progress through its six short stages and defeat enemies all in an effort to obtain those bottles. Each one you nab makes you slightly slimmer. However, your rival isn't all that keen on you regaining the girl, so he has henchmen lying in wait to ambush you with food. Yes, one of the main attacks enemies have in this game is to throw food at you. Colliding with it causes your weak-willed avatar to immediately stop and devour it, gaining more fat in the process.

Being slim is important for more reasons than just impressing your erstwhile girlfriend. It also affects your effectiveness in dealing with the monsters in many of the stages. A slim penguin has a long-range projectile attack that allows them to clear out enemies before they can get too close to you, while a morbidly obese one can only fend off nearby tormenters with a belly flop. Your weight also determines if you're even allowed to complete stages, as if you're not thin enough by the end of a level, you'll have to replay it in an attempt to reach the given threshold. When the game has been completed, if you're still fat, you get the bad ending where, despite your best efforts, you're still dumped.

The thing is, there's just so little to this game that it feels less like an actual product that was sold in Japanese stores and more like one of those $1 indie offerings. It's one of those games that offers little content, but, with two endings based on performance, delivers an inducement for players to regularly work on it in order to achieve the good one (which is more a bizarre joke than something actually "good"). Other than that, well, I guess it's an achievement for a game to possess three different styles of play over the course of an adventure that probably would take a skilled player about 10 minutes (at most) to complete. 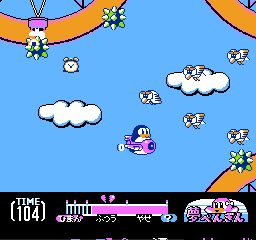 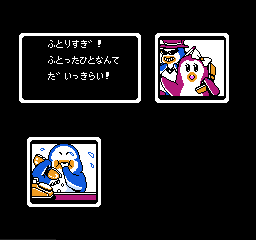 For nearly four full levels, Yume Penguin Monogatari is a pretty typical platformer. You attack enemies in whichever way your current weight allows, while collecting Fat-B-Gone to lose mass and clocks to extend the time you have remaining to finish the current stage. There are ledges to jump to and from and many water hazards, which have the bizarre effect of putting you at maximum obesity if you fall into one. It's pretty standard stuff, lightly tinkered with to include the "fat/thin" dynamic. With, say, three times the number of stages, it'd even be worthwhile!

The other two levels place you in the air for some horizontally-scrolling shooter action. A really trimmed-down, no-frills shooter, that is. You still get more obese for taking hits and you still seek out every Fat-B-Gone bottle and clock you can nab -- you're just in the air shooting flying critters now. With a pea shooter, as there aren't any power-ups (unless you get down to maximum thinness, in which case your weapon will be upgraded). I guess you'd call these stages a bit of a diversion, as the action is too bare-bones to stand on its own. It is nice to have a bit of variety, though.

Finally, the last boss fight is somewhat different from anything else in the game. It also takes place in the guise of a shooter, but instead of flying horizontally, you're at the bottom of the screen firing upwards at your rival in his large plane. It's sort of like a cartoonish version of taking on a 1943 airplane. Although it's sort of neat to play a game that tackles multiple genres, the developers would have done better to put their energy into creating a more robust experience.

I mean, Yume Penguin Monogatari is not the only really short game I've played on the NES/Famicom, but when you add its general lack of challenge, it just feels less substantial. Castlevania, also released by Konami, also only had six stages, but each of those was divided into multiple zones, there were multiple secondary weapons to give you more diverse combat and, after the first couple of levels, the difficulty quickly rose to a point where it took a lot of work to continue clawing my way through the game, one screen at a time. It was often brutally hard and I felt like a masochist more than once for subjecting myself to death after death, but my eventual success over various stages and bosses not only motivated me to keep going, but also still resonates in my mind.

While Yume Penguin Monogatari is reasonably fun and accessible, it's too short and simple to be anything more than a brief diversion, as opposed to a memorable and classic title of yesteryear. It's the sort of title a person plays, vaguely enjoys and immediately forgets about once the credits roll -- even if it does possess a surprisingly cruel sense of humor under its cartoonish facade. For $1, this would be a high-quality indie title. The problem is that it was released as an actual retail title that still costs a minimum of roughly $20-$25 if you mean to purchase it. Unless you're a collector looking to obtain a copy of virtually everything produced for this system, that level of investment simply does not compute.
2.5/5

If you enjoyed this Yume Penguin Monogatari review, you're encouraged to discuss it with the author and with other members of the site's community. If you don't already have an HonestGamers account, you can sign up for one in a snap. Thank you for reading!

© 1998-2021 HonestGamers
None of the material contained within this site may be reproduced in any conceivable fashion without permission from the author(s) of said material. This site is not sponsored or endorsed by Nintendo, Sega, Sony, Microsoft, or any other such party. Yume Penguin Monogatari is a registered trademark of its copyright holder. This site makes no claim to Yume Penguin Monogatari, its characters, screenshots, artwork, music, or any intellectual property contained within. Opinions expressed on this site do not necessarily represent the opinion of site staff or sponsors. Staff and freelance reviews are typically written based on time spent with a retail review copy or review key for the game that is provided by its publisher.