Suffering from a mild case of burnout, I told myself it was time to find shorter and less demanding games to play while I recovered. Doing so would also allow me to write more reviews, which was desirable since I've spent months barely covering anything at all. I was pleased with my new resolution.

Then, like an idiot, I read a little bit about Toukiden: Kiwami and said to myself "Hey, that'll suit my needs perfectly!"

In hindsight, I can see that I didn't do nearly enough research. Toukiden: Kiwami is actually two games in one, and neither of those two games are short. Toukiden: Age of Demons released on Vita last year and Mike Suskie reviewed it for this very site. He said at the time that you could get to the end in just under 30 hours with focused play, and he's right. I say that with confidence because (as far as I can tell) the entirety of that game is reproduced here. There's even talk on the title menu of exporting your save, a feature I wasn't able to take advantage of myself. 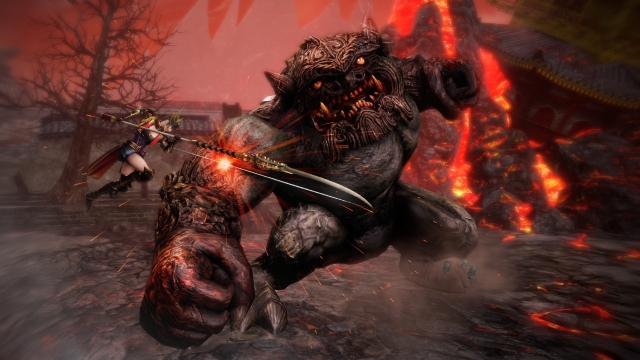 So that's easily around 30 or 40 hours of play right there, and then you realize that the game is just getting started. It gives you a couple more chapters so you can buff up your characters a bit and then it keeps right on going with an additional set of chapters that's every bit as meaty and interesting as the first batch. My dreams of a short game were thrown out the window and trampled into dust. I finally reached the closing credits in just over 60 hours, while ignoring a number of optional quests along the way, and there's plenty of post-game content and online stuff to keep me busy for twice that number.

Numbers are on Toukiden: Kiwami's side, then, if you're looking for good value but is the game actually good enough that you'd want to devote the time required to play through it all?

That particular question is easiest to answer if you've played a Monster Hunter game, since the most convenient way for a lazy critic like me to describe Toukiden: Kiwami is to call it "Monster Hunter-lite." The idea is that you are a Slayer who has just come to a village, and now you have to help bring down a bunch of monsters before they can overrun your village. This you accomplish by accepting missions that mostly contribute to a surprisingly involving storyline, as well as a few that just give you the experience and resources required to grow stronger. 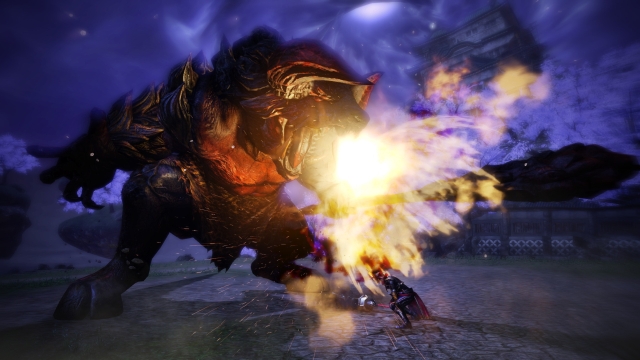 If you've played Monster Hunter, all of that should sound familiar, and yet there are a few key differences that make Toukiden: Kiwami its own special experience. Perhaps the most obvious of those differences is the fact that even the single-player campaign pairs you with friends, for most missions. You'll typically have three allies running around the field with you, hacking apart the various monsters and using their skills to inflict great damage or support your own efforts, as needed. The AI is remarkably competent here, even without your input. There was one case where my hero was dazed and my ally swiped his club at me four times from close quarters before he managed to snap me out of it--which looked a bit silly, I admit--but otherwise I never had any reason to complain. You can direct your computer-controlled pals to follow you or support or whatever, but I did just fine leaving them to their own devices. That's very cool.

Another key difference is the actual process of hunting down beasts, which is how you occupy the bulk of your time. In the Monster Hunter games, felling a giant behemoth often requires you to follow it around its natural habitat, gradually weakening it and then giving chase when it retreats to lick its wounds. You begin to feel as if you are an actual hunter, just like the title suggests, and when sweet victory finally comes, you know you earned it.

Toukiden: Kiwami is much simpler. In a number of missions, you simply walk through a gate and immediately you are locked in battle. Or if you have to search, it doesn't take long and then you can remain engaged until you either win--the most likely outcome, since the game is actually rather easy--or fail miserably and are taken back to your home base. The emphasis here is on brutal battles, where you lop off enemy limbs and avoid foes that rampage around giant battlefields, belching flames or using their massive girth to try and flatten you. It's exhilarating, up to a point, but at the same time rather limited compared to the experience its competition offers. 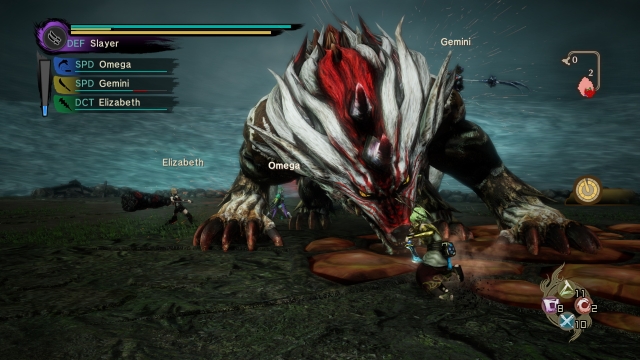 Like I said, though, the storyline is quite involving, and that's something I never could say about Monster Hunter. The heroes you meet here start out quite generic, but by the time you get to the end of The Age of Demons, they've grown an extra dimension or two and it's much easier to care what happens to them. Then the Kiwami content comes along and introduces a bunch of new characters and plays around with the existing characters while expanding the mythology to bring everything to a more definitive conclusion. There's plenty of voice acting along the way, all of it in Japanese, with competent subtitles that are easy to follow, and a generous helping of beautiful cutscenes.

For that matter, almost the entire game is a treat to behold. I can't personally compare it all to the Vita version, but I will say that it all looked gorgeous on my HD television. Textures are detailed and crisp, with some nice touches here and there such as swaying grass along the ground and dancing shadows during battles that often morph into explosions of color as warriors hack at the various beasts. It's typically on par with an especially nice looking PS3 title, but without many of the draw distance issues that so often plague Koei's hectic battlefields.

Given the volume of content available, I was pleasantly surprised by how nice everything looks. When you make progress, you can buy different suits of armor, mixing and matching greaves and helmets and plate mail and such. There are a variety of weapons, as well, and most of them look quite distinct, with moves to match. I didn't play around with the various options a lot because I found that I enjoyed using the nagitana. It's a blade attached to a long pole that allows a flurry of powerful moves when you get in the groove. I started with the bow, but quickly found that getting up close and personal with the various beasts was more to my taste. The twin daggers were okay, but a little too weak unless a flurry of attacks went especially well, and the more powerful gloves were too heavy and slow. I didn't even have time to play around with guns and such. Your own experience could differ wildly, and that's good. I was glad the game offered so much variety. 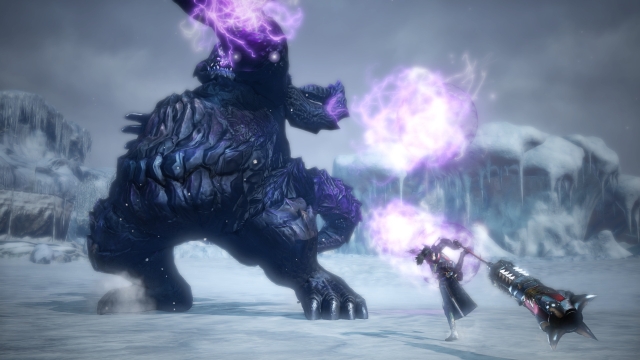 Well, mostly it does. Unfortunately, the fact is that there are only so many distinct monsters in the game, and you'll encounter them--and slight variants--numerous times before you get to the closing scenes. I fought 120 battles between the game's start and its final regular duel, which means I faced each breed of demon (here known as "Oni") an average of around 6 times. Some of them are practically clones of one other, so I did start to feel some fatigue. The campaign could have been a bit shorter and it wouldn't have suffered for it, I don't feel.

Fortunately, there's enough activity between battles to keep the overall experience mostly engaging even when you're taking down yet another oversized spider or feline. The chase for new equipment is especially addictive, and you can also send a creature called a Tenko on hunts to find loot for you. There also are hot springs to visit (a silly but useful mechanic), a guardian tree to bribe for rewards, and a slew of Mitama to collect. These can be upgraded and equipped to weapons to bestow skills, and there are apparently around 300 of them available in all. I've only gathered a third of them thus far. Are you getting a sense for the amount of time that a person might spend with the game? And there are other mission types besides, including what amounts to an endless mode where you can fight numerous Oni in rapid succession, if that's your thing. 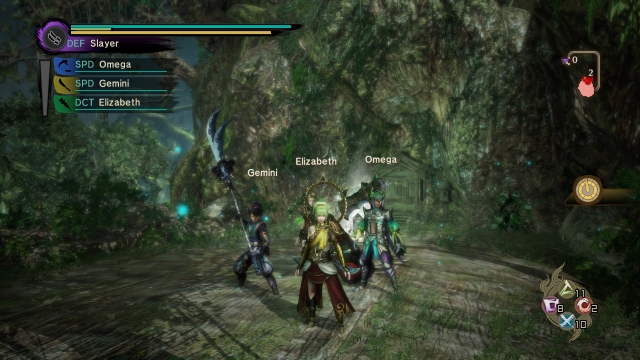 One final consideration is the online functionality. Nearly any time you like, you can touch a magic stone and look for online lobbies, then join groups on special missions as you work together to with human allies to eliminate increasingly difficult adversaries. The interface is a bit barebones, I thought, but it definitely works. I had no trouble finding lobbies at random times and working through a few fields, all without ever encountering any lag that I could see. With a group of friends, I can imagine having a total blast.

To get back to what I was saying near the start of this review, though, Toukiden: Kiwami is a game you go for when you're looking for something meaty that will keep you busy for a long, long while. That's not actually what I was hoping to find when I started playing, but the experience quickly won me over and I found myself looking forward to spending a few hours each day for the several weeks I eventually spent advancing through the campaign at a pace that felt natural. If you're on the hunt for something to keep your PlayStation 4 busy for a couple of months or just a few hectic weeks, there's not really anything I'd recommend ahead of this game. Who knows? Maybe you'll buy it and we'll meet online. I'll be the one waving my nagitana around like a crazy fool.

If you enjoyed this Toukiden: Kiwami review, you're encouraged to discuss it with the author and with other members of the site's community. If you don't already have an HonestGamers account, you can sign up for one in a snap. Thank you for reading!

© 1998-2021 HonestGamers
None of the material contained within this site may be reproduced in any conceivable fashion without permission from the author(s) of said material. This site is not sponsored or endorsed by Nintendo, Sega, Sony, Microsoft, or any other such party. Toukiden: Kiwami is a registered trademark of its copyright holder. This site makes no claim to Toukiden: Kiwami, its characters, screenshots, artwork, music, or any intellectual property contained within. Opinions expressed on this site do not necessarily represent the opinion of site staff or sponsors. Staff and freelance reviews are typically written based on time spent with a retail review copy or review key for the game that is provided by its publisher.