In the year 1995 of our Lord, the adventure games market was saturated with quality titles from well known companies, such as Lucasarts and Sierra. Not just that, but on that same year Full Throttle and The Dig were released, with Broken Sword just one year away. I was an avid fan of the genre even back then, so when the release of Discworld came, I was interested because it was filled with sorcery like actual speech and high quality CD audio which were somehow included in the gameplay itself.

"Preposterous" - young DarkEternal said, his monocle popping out into a cup of tea dangerously close to overflowing before he bought the game to see what the hubbub was about.

Discworld is set in the fictional world made by author Terry Pratchett who recently passed away, and who had, until his death, published forty novels set in that particular universe. The titular world is in the shape of a disc that's settled upon four giant elephants that support it. Who in turn stand on a gigantic space-faring turtle called A'Tuin. Yeah, it's a weird setting.

In Discworld, you take control of Rincewind, a hopelessly underachieving wizard in a magical academy called the Unseen University within the city of Ankh-Morpork. First thing you'll find is that Rincewind is a sarcastic know-it-all douchebag (voiced by Eric Idle of Monty Python fame) with no heroic qualities. He's afraid of everything and has neither competency, prospects in life or redeemable qualities.

I knew I'd love him from the start.

The story starts with a dark group of cultists summoning a great red dragon to the city of Ankh-Morpork for their own goals and continues with Rincewind waking up in his bedroom and scratching his testicles. Yes. This is the kind of transition that one will have to get used to in title. After he gets his bearings, the first thing you'll probably see is the inventory screen which comes in a very original form of a pet, a treasure box with sharp teeth and a never ending depth in which you can store whatever you want going by the name of Luggage. 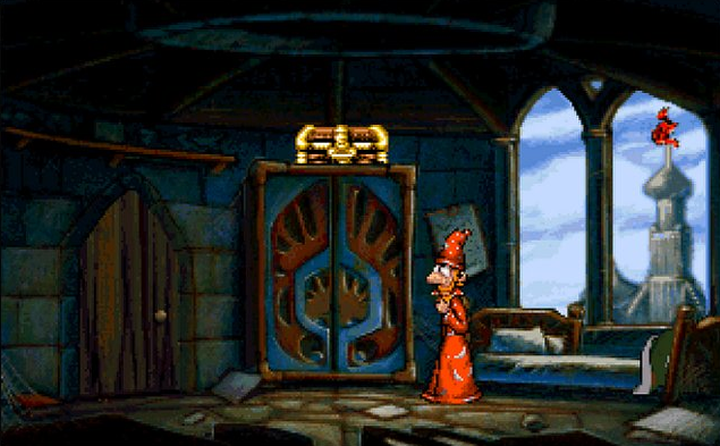 At first, Rincewind is confined to the grounds of Unseen University, where you'll already see that this game does not play by any rules. It has its own world of physics and in video games that also means that it has its own logic on how things are done. For instance, the librarian is a monkey. I don't really know what else to say here, but he's a damn monkey and apparently very into bananas and jumping around the library. Half of the staff in the Unseen University is composed out of senile old wizards that are either incompetent by default, or just don't care about anything and spend the majority of the game stuffing their faces in the dining room.

Once you get out of the University, you'll get to see that the rest of the town isn't much better. Ankh Morpork is a circular city with its own map over which you'll travel to various areas and meet some really colourful individuals, like the retired adventurers who never stop yapping about how they killed ogres, dragons and the like in their days with nothing but their well oiled muscles and bravado. Or the World's tallest dwarf which is basically a human, but he identifies himself as a dwarf, and of course Death. 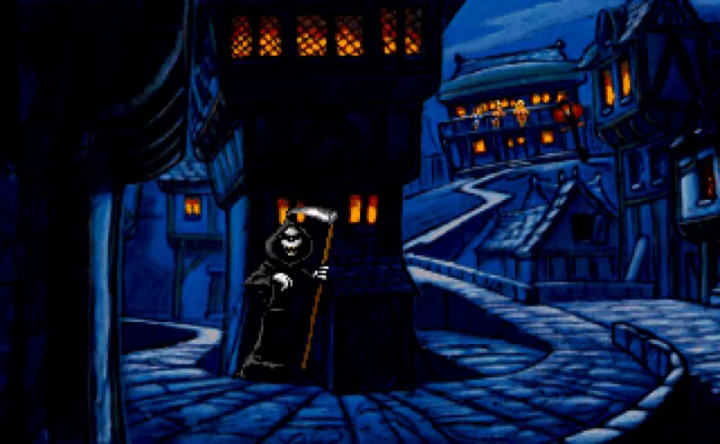 Those that read Discworld novels know that Death plays a major role in a lot of them as an actual sentient being, but for me, seeing him in the game and acting like a normal guy who is sort of tired from his work was a revelation. A hilarious revelation. He is oozing with character, especially when he wants Rincewind to die in some way or the other so he can be done with his job.

Naturally, due to the nature of adventure games, you'll be seeing Death a lot.

The pioneering thing that Discworld did was the way how Rincewind talked to others. At that time in the adventure game cycle, you usually could choose one option offered in the speech tree. In Discworld there are no sentences to choose from, but rather icons. One is a normal chat icon, the other is to be a buffoon, and then there is also the favorite option, and that's the ironic/sarcastic one, though to be fair, most of Rincewind's options are somewhat in that vein.

The worst, and at the same the best part of Discworld is the meat of every adventure game, and that's the puzzles. They are good, they are funny and very rewarding, but like I said, they follow a certain logic, especially the farther you get in the story. For instance, in the first chapter, Rincewind needs to get an ingredient for the headmaster of his school, the dragon's breath. To get this, he needs to get a mirror, climb to some tower in the middle of nowhere, go to the top floor and climb a pole (where Death will appear to tell him it's hard to climb with no grease so he should probably spit in his hands to ease the journey), put the mirror on the pole and then shine it at a particular angle which will make the light of the sun reflect into the dragon's eyes. The dragon will be interested and come check it out. Since apparently this dragon is also fabulous, it will start looking at itself in the mirror and breathing on it before leaving. There, you have the dragon's breath. Easy. 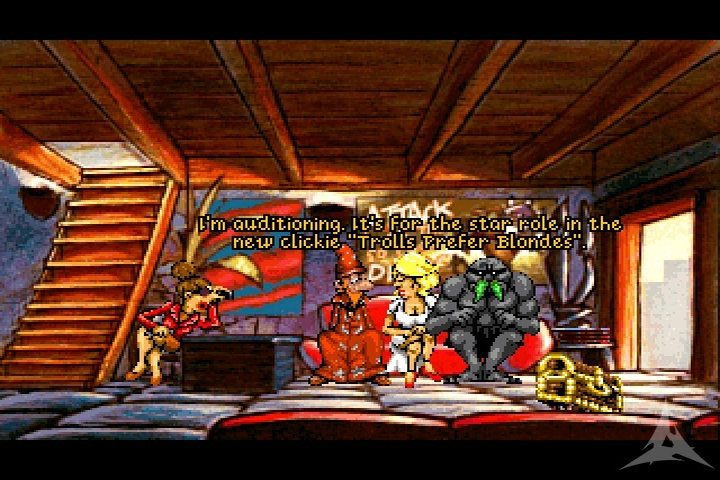 That was one of the more logical puzzles, mind you. I won't even get into the butterfly effect ones where butterflies apparently cause floods which will help you on your way when you plant them in a specific location, because that's how common sense works here. I'm guessing this sort of logic works for those that read the Discworld novels, but for a newcomer that came to play it without any prior knowledge of the series, it was tough.

To this day, nineteen years later of playing adventure games, this is the title I'm most proud of finishing because I did it at a time when there were no walkthroughs, or online availability of anything, really. It took me almost three years to do it, but when I was done it was oddly satisfying. So, thank you for that Terry Pratchett. For making this world come alive in a medium I adore. Thank you and rest in peace.

If you enjoyed this Discworld review, you're encouraged to discuss it with the author and with other members of the site's community. If you don't already have an HonestGamers account, you can sign up for one in a snap. Thank you for reading!

© 1998 - 2023 HonestGamers
None of the material contained within this site may be reproduced in any conceivable fashion without permission from the author(s) of said material. This site is not sponsored or endorsed by Nintendo, Sega, Sony, Microsoft, or any other such party. Discworld is a registered trademark of its copyright holder. This site makes no claim to Discworld, its characters, screenshots, artwork, music, or any intellectual property contained within. Opinions expressed on this site do not necessarily represent the opinion of site staff or sponsors. Staff and freelance reviews are typically written based on time spent with a retail review copy or review key for the game that is provided by its publisher.