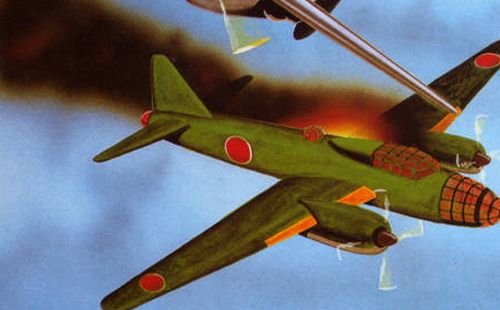 Over the years, shoot 'em ups have taken players to wondrous places. It's thanks to this genre that we've flown over every square kilometer of the earth, and have even delved into the depths of the sea. We've witnessed the destruction of civilizations, the aftermaths of both scientific and fantastical wars, and the establishment of terrifying new regimes. Alien worlds welcomed us, some bathed in flames and others capped with frost and ice, not to mention a few that exuded noxious fumes. Shmups have taken us beyond interplanetary travel and conflicts as well, sometimes into the very innards of tremendous beasts or through once-sealed complexes, ruins, and temples. The beauty of playing a well-made scrolling shooter lies in gazing upon the creative material dreamt up by minds of designers whilst gunning down fierce competition.

...and then you have 1942, which ushers you through more than thirty levels transpiring over the Pacific Ocean and its hundreds of miles of the color blue. Now and then you might spot an island, usually covered with familiar vegetation and rimmed with a plain yellow beach. Honestly, there are no other highlights to 1942's scenery, save for a city near the game's conclusion. Sure, you might spot a river or a lake, but they serve only to taunt you. "This is the color you have to look forward to for the next fifteen to thirty minutes," the game seems to say with a dry cackle. Boredom engaged: preparing to yawn... 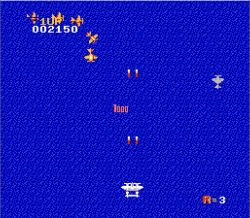 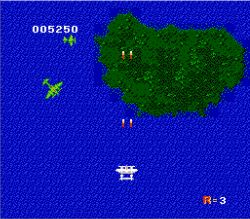 As you may have guessed by the title, the game isn't about taking a leisurely flight across the pond. Rather, you've enlisted in the air force and are currently blasting bogeys in the Pacific Theater of World War II. Unfortunately, this tells you precisely what to expect from 1942's rogues gallery: oodles of planes, varying only in size and capabilities. For instance, some aircrafts attempt to crash into your wings, while others soar into the battlefield and back off as you approach them. Several of them send bullets your way, but other larger specimens simply jet straight towards the top of the screen, hoping that you will inadvertently collide with them.

In other words, expect to contend with standard fare shooter villains from top to bottom. Even in regards to the game's boss encounters, you meet vanilla opposition in the form of an enormous plane that launches a slew of easily evadable projectiles from its tail. Bear in mind, now, that I'm not providing a single example and leaving the rest of the boss lineup ambiguous. There is actually only one boss in 1942, and it's the same mega-plane battle rehashed a few times throughout the campaign.

Mechanically, 1942 is stable. Its control response is tight and its scheme is intuitive. One control feature I found neat was an evasive loop-de-loop you can execute by pressing the A button. Sadly, you only receive a few of these per level, but if you're at least halfway decent at shooters, you won't need more than the allotted number. Heck, I suck at most shmups, and even I didn't use more than a few loop-de-loops during the campaign's hairiest moments. 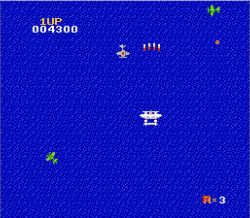 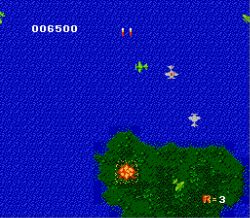 When a game functions as solidly as 1942 does, I feel it's my duty to at least award it an average score and then be on my way. However, the game sours not in the physics or play control departments, but in the campaign itself. What mainly plagues it is repetition, and not just of the previously mentioned environments. Every stage plays out in the same manner, except that later levels inundate you with elevated volumes of dinky adversaries, none of which arrive in any discernible formation or pattern. Foes zoom in from every angle, almost as though there were someone off-screen haphazardly throwing them into the fray. This occurs in every stage throughout 1942, and it causes fatigue by the time you reach the conclusion. I can't tell you how sick of WWII-era planes I am thanks to this game.

To make matters worse, 1942 seems to do everything in its power to exacerbate the tedium of monotonously shooting the same five or so enemies repeatedly. Not only is the campaign way overlong, as mentioned above, but the game treats you to one of the most torturous soundtracks from the early NES era. From start to finish, you hear a very basic militaristic marching tune that consists of a drum-like noise and a single shrill note that plays in a peculiar rhythm. This cut would at least be ignorable if it weren't the only damn song that you hear for thirty-freakin'-plus levels. That's right: 1942, in essence, consists of more than a couple dozen stages--with no save or password feature, but infinite continues--full to the brim with ho-hum airborne opponents dancing to the beat of a single, grating ditty. My honest recommendation is that you enroll in therapy before you even insert this game into your NES.

Doing so might save you from an ending that could otherwise drive you stark raving mad:

That's all you get: a plain black screen with white text, and then the title appears once again.

1942 is not the excellent shooter I once believed it to be. Regardless of the action it boasts and its wonderful control response, the game is a lengthy, tedious shmup existing in a world where we've advanced well beyond merely flying over a single color and sending ordinary planes to a watery grave. My recommendation is to maybe visit a level or two, just to pay tribute to a classic title, and then to move on to a more engaging experience.

If you enjoyed this 1942 review, you're encouraged to discuss it with the author and with other members of the site's community. If you don't already have an HonestGamers account, you can sign up for one in a snap. Thank you for reading!

© 1998-2021 HonestGamers
None of the material contained within this site may be reproduced in any conceivable fashion without permission from the author(s) of said material. This site is not sponsored or endorsed by Nintendo, Sega, Sony, Microsoft, or any other such party. 1942 is a registered trademark of its copyright holder. This site makes no claim to 1942, its characters, screenshots, artwork, music, or any intellectual property contained within. Opinions expressed on this site do not necessarily represent the opinion of site staff or sponsors. Staff and freelance reviews are typically written based on time spent with a retail review copy or review key for the game that is provided by its publisher.