Kat is a girl with problems. Amnesia is one of them, and trouble gaining the trust of those around her is another. A lot of that mistrust has to do with her ability to manipulate gravity, which is seemingly related to a mysterious cat that follows her around. It's a fun, mostly familiar superhero setup. Kat and her supporting cast are all designed well and great fun to watch.

Gravity Rush drops Kat into a fantastical city that is filled with bizarre flying machines and impossible, floating architecture. The player is free to explore that environment using Kat's gravity power, and it is here that the game is truly brilliant. The player taps a button to float, or turn off gravity in the area around Kat, and then taps the button again to fall in the direction she is facing. A fall can be canceled at any time, leaving Kat floating at the desired point in space. Effectively, this mechanic grants the player a flight ability, limited only by an ever growing power bar that recharges rapidly. The player can also allow Kat to fall all the way into, say, the side of a building, and proceed to run on the shifted plane as if it were the ground. It's all less disorienting than it sounds, even when combating multiple enemies, and is in practice one of the coolest superpowers I've seen in a game. 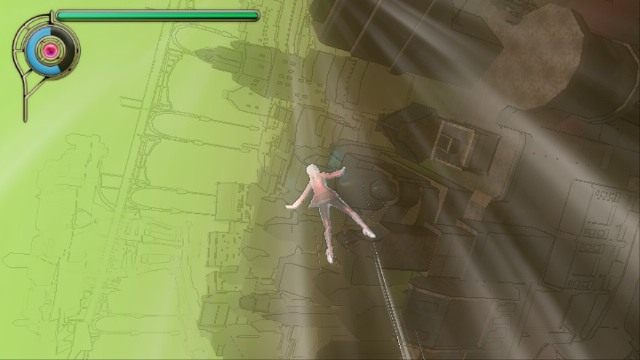 An open world game on Vita that allows flight across an entire city? Yes, it's possible, thanks to a clever graphical trick that makes distant objects appear as sketches that are filled in with detail as the player approaches. This approach turns the potentially disastrous issue of draw distance into an effective comic book stylization consistent with the rest of the game. In interviews, director Keiichiro Toyama mentioned French and American comics as influences, and it shows. Sure, there is an inevitable helping of manga in the look of the characters, but the interstitial story scenes are told in what is definitely meant to be an American comic book style.

It's unfortunate that the rest of Gravity Rush's gameplay can't quite keep up. Kat defeats enemies by floating up, targeting them, and using gravity to launch a super, falling kick. There isn't anything wrong with that, except that it's something you're going to be doing with nine out of ten enemies. That, or just mashing Square to kick enemies that are on the ground when Kat isn't using powers. You see, for all the coolness of Kat's gravity flying, she badly needs an expanded move set. In this way, the game could have taken a note from PlayStation's other original superhero series, inFamous, and allowed Kat's powers to stretch into more damaging and more combo-friendly forms. The game makes a few attempts, giving Kat a decent special move that has to recharge and the ability to throw items that float up with her when she gravity shifts. However, that's simply not enough to significantly change combat, and the player will invariably use the gravity kick to deal with most enemies. Those enemies, by the way, are almost always variations of a glowing red target with shadowy appendages. 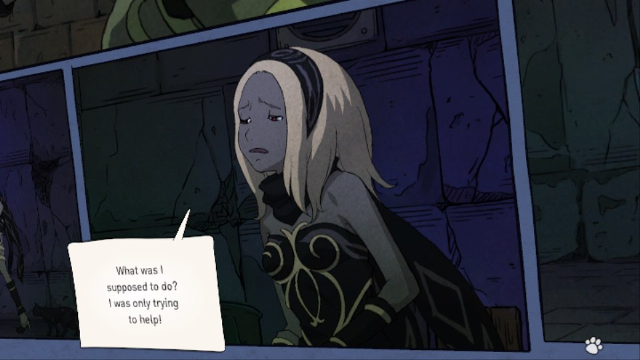 There is also the issue of Gravity Rush's story. It's got some cool ideas, and a great supporting character in rival gravity shifter Raven, but it overly favors mystery over explanation. Kat is on a quest to protect the city and gain the trust of its people. Sure, it's great to see her becoming the city's Gravity Queen through hard work and a sense of justice, but the problem is that you never get to know exactly who Kat is. You never learn the nature of her or Raven's powers, or the world in which they live. Some esoteric hints are provided here and there, but I would have liked to see more. If this is an American comic book, it certainly isn't an origin story. It seems like that aspect is deliberately held back, probably for a sequel. That's a real shame, since I think the answers to my questions are already determined, and addressing them would have potentially taken the game to the next level.

I bought Gravity Rush on launch day. I have not gone through the story a second time, and I have yet to complete most of the game's optional challenges. However, I often fire up my Vita just for the joy of flying through the city and playing with gravity. The mechanic is so well done, so interesting, that it alone can hold my attention in a way much of the rest of the game fails to do. If Kat had a few more moves, if her enemies were a little more varied, or if her story were a little more memorable, then Gravity Rush could have been a superhero game for the ages. As it stands, the title is merely above average.

If you enjoyed this Gravity Rush review, you're encouraged to discuss it with the author and with other members of the site's community. If you don't already have an HonestGamers account, you can sign up for one in a snap. Thank you for reading!

© 1998 - 2022 HonestGamers
None of the material contained within this site may be reproduced in any conceivable fashion without permission from the author(s) of said material. This site is not sponsored or endorsed by Nintendo, Sega, Sony, Microsoft, or any other such party. Gravity Rush is a registered trademark of its copyright holder. This site makes no claim to Gravity Rush, its characters, screenshots, artwork, music, or any intellectual property contained within. Opinions expressed on this site do not necessarily represent the opinion of site staff or sponsors. Staff and freelance reviews are typically written based on time spent with a retail review copy or review key for the game that is provided by its publisher.