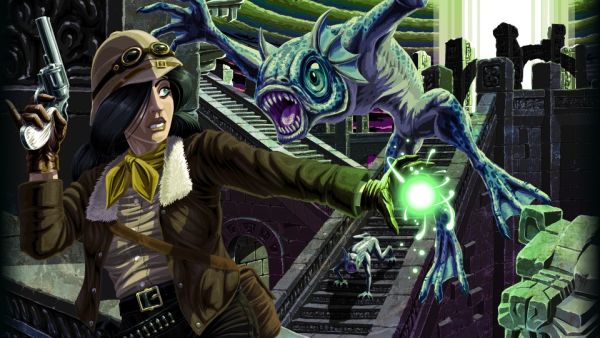 Eldritch is caught in a relentless tug-of-war, with the survival horror genre on one side and roguelike taking up the slack on the opposite end.

Despite the alarms that sounded in my head as I viewed the game's Steam page, warning me that the illogical fusion of elements will only lead to a flawed title, I tossed that sucker into my virtual shopping cart and fed Valve my credit card digits. After pumping a few hours into the title, I can honestly say that the nagging sensation warning me that the hybridization would ruin the experience was dead wrong. As it turned out, a completely unexpected factor doomed Eldritch instead...

You begin the game in a library, with four "worlds" available to you in the form of magical books (one of which is a bonus region added via free DLC pack). As you enter a realm, the game procedurally generates a 3D environment, decked out in a pseudo-retro style. Basically, the presentation is that of an 8-bit title rendered in three dimensions, which gives Eldritch the vibe of an old school FPS. Once within the boundaries of an alien dimension, your task is to seek out a certain artifact and return to the library relatively unscathed. As you explore, you'll discover a variety of weapons and abilities to aid you in your quest. Mostly, you'll run across an abundance of knives, revolvers, and explosives, although you do occasionally spot some compasses, high-jump spells, and special kits for unlocking sealed doors. 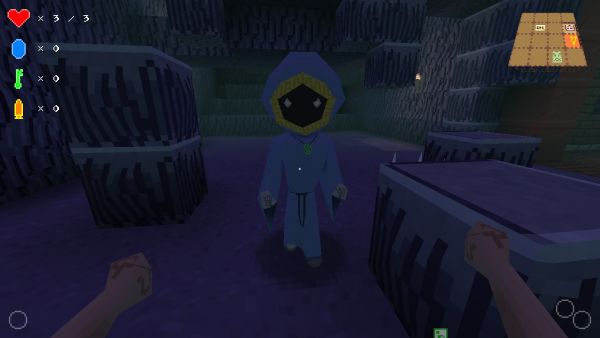 Unfortunately, the game features a dearth of neat gizmos to pick up. Part of what makes most roguelike games enticing is the prospect of securing loot or new equipment for upgrading your character. You'll never find new armor or any weapons beyond the stock arsenal the game sports. This pretty much kills Eldritch's exploration factor, which might lead you to question why the developers bothered with a roguelike structure.

It may not be obvious at first, but procedural generation plays a huge role in the game, even despite the lack of rewarding exploration. As you enter a stage, you may not immediately know where the exit lies. This can lead to a sense of helplessness and dread, especially once the Lovecraftian denizens of the foreign worlds come seeking your blood. Nasty cultists are the least of your worries in Eldritch, although they inhabit all stages. You'll also have to outwit Innsmouth-ish fish people, mini-Cthulhus, immortal humanoids, and even Nyarlathotep himself.

You could engage these suckers in combat, but for a few snags. For starters, you only begin with a measly three hit points. Even if you're able to locate a water fountain, which increases your max HP by a point, you still have your opponents' projectile shots to deal with. Should one nail you, you could lose more than a single hit point, which can be crippling or even fatal if you're sitting on two or three. You could brandish the revolver and start shooting, but ammo is not plentiful outside of the first realm. To make matters worse, enemies respawn, so killing one is only a temporary solution. 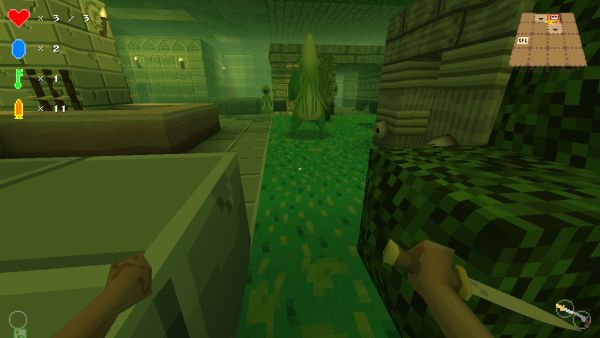 Like survival horror games of yore, it's more to your benefit to avoid combat and run straight for the exit, whilst conserving consumable goods. That would be terrifying, assuming you don't know where the exit is located, but finding it is really not a problem. Near the entrance of the first world is a compass, which reveals the location of exits. All you need to do is nab that and immediately return to the library, thereby eliminating the sense of dread caused by running blindly.

Once again, this might leave you questioning the inclusion of roguelike elements. If your safest bet for survival is to eschew all exploration and just gun for the exit, then why bother having convoluted stages, especially when you can easily secure an item that dulls the boost in challenge factor that results from the game's windy structure?

Regardless of the apparent nonsensical design, I did have a little fun playing Eldritch. Even with the compass, locating the exit is not certain. Sometimes you'll think you're headed in the correct direction, only to find out there's a wall impeding your progress. Your alternatives would be to backtrack to a previous floor and find another pathway leading to the exit, or blow a hole in the wall or floor if you have some dynamite. In other words, spotting the way out and managing to stay alive require a bit of intellect and skill. It takes a bit of finesse to be able to run at high speeds while avoiding an army of otherwordly horrors, not to mention while also dodging projectiles and checking your rear. All the while, you have to consider where you've been and where the likeliest pathway to the exit would lie. 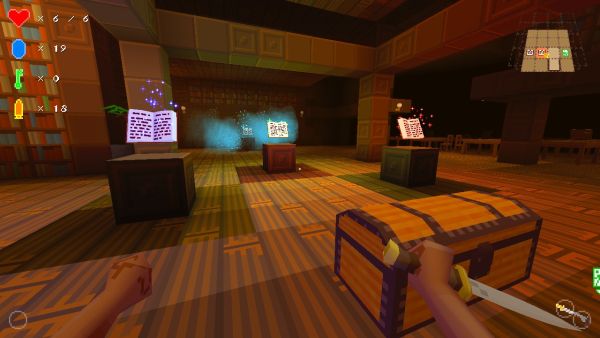 Unfortunately, I found that the game wasn't entertaining enough to finish, especially when it institutes a concept like permadeath. Although you respawn in the library after perishing, you lose all of your weapons, items, and bonuses. The only thing that remains is any money you happen to have saved in a bank, which randomly appears in dungeons. Worse than that, any artifacts you've collected since starting will return to their original positions in the labyrinths. In other words, you have to play through all of Eldritch with a single life, not faltering even once. Call me crazy, but finishing the campaign isn't worth the effort. Of all the factors that would damn the game, I never expected a punishing difficulty rating to take top honors, especially when you consider that I'm a gaming masochist.

Eldritch is a bold experiment, unfortunately lacking in refinement. The game's chief element are at odds with one another, as one begs you to explore while the other bids you flee for fear of life and limb. However, the game's stringent demands combined with its crushing difficulty and lackluster entertainment values damage it the most. Ultimately, the content Eldritch boasts doesn't justify trying your damnedest to complete the campaign.
3/5

If you enjoyed this Eldritch review, you're encouraged to discuss it with the author and with other members of the site's community. If you don't already have an HonestGamers account, you can sign up for one in a snap. Thank you for reading!

© 1998-2021 HonestGamers
None of the material contained within this site may be reproduced in any conceivable fashion without permission from the author(s) of said material. This site is not sponsored or endorsed by Nintendo, Sega, Sony, Microsoft, or any other such party. Eldritch is a registered trademark of its copyright holder. This site makes no claim to Eldritch, its characters, screenshots, artwork, music, or any intellectual property contained within. Opinions expressed on this site do not necessarily represent the opinion of site staff or sponsors. Staff and freelance reviews are typically written based on time spent with a retail review copy or review key for the game that is provided by its publisher.