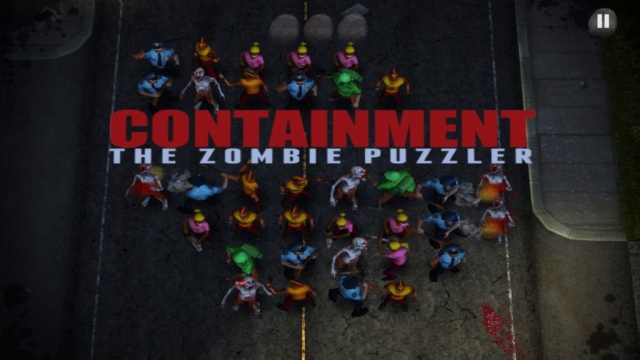 Containment: The Zombie Puzzler tries to be the odd kid of the puzzle genre by eschewing familiar trappings: the cavalcades of cuteness, the endlessly dropping objects, and the seedy-dive-friendly displays of bare flesh hidden beneath simple mechanics. Instead, it replaces them with man-eating zombies and scores of survivors banning together to rid the world of the undead menace. That's right, Containment attempts to be a standout title by featuring a hackneyed concept like a zombie apocalypse. Oddly enough, it almost works...

You see, Containment sports an actual campaign with a narrative. In it, you guide a vast contingent of humans who are marching against an army of ghouls, following a major zombie outbreak. Thankfully, "marching against an army of ghouls" doesn't mean arranging your opponents into like colors, thereby causing them to mysteriously vanish. Rather, offing walkers is a matter of swapping survivors until a group of identical warriors surrounds the perimeter of a zombie horde. In other words, positioning only policemen, gun-toting punks, or busty scientists around a two-by-two block of zombies will spur them to eradicate the surrounded undead. Unfortunately, you don't have all of the time in the world to make these adjustments, as restless ghouls love to munch and convert nearby human pieces, should you take too long to eliminate them. 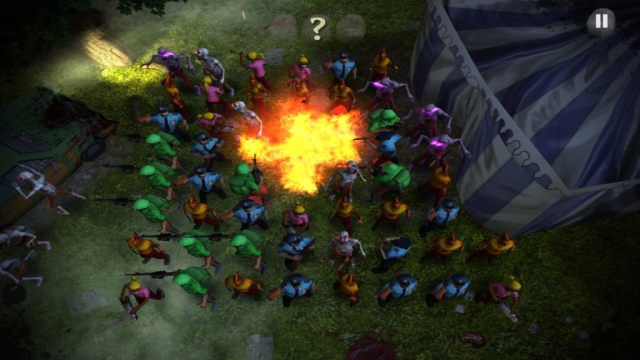 As you can imagine, this makes for some intense moments later on. That's when the game's speed picks up and the zombies grant you less time to strategize. That's also when chomps become more frequent, and greater numbers of your allies transform before you, increasing the size of the walker army. Thankfully, you are not without a few tricks of your own, as scoring impressive combos nets you specialty items to use against the living dead. For example, you can acquire grenades that take out a certain portion of pieces, both zombies and humans alike. You can even call for an air raid, which will wipe out a line of targets. There are also HAZMAT suits you can pick up, which transform three of your pieces into "wild cards," so to speak.

Unfortunately, the main differences between one segment of Containment and another--allotted time aside--are the size and shape of the crowd. In other words, if you've played one stage in Containment, then you've played a goodish portion of the game. Before long, even the most unforgiving courses feel like familiar territory, and the experience eventually grows stale. The developers tried to liven things up by adding special foes and bosses that appear now and then. For instance, wizards eventually appear, casting sinister zombie-creating magic and tending to take multiple hits to fell. While additions like this are awesome and necessary, the game only adds new features every so often, when it should be doing so on a regular basis. In the end, the game is still better than average, but not nearly as great as it could have been. 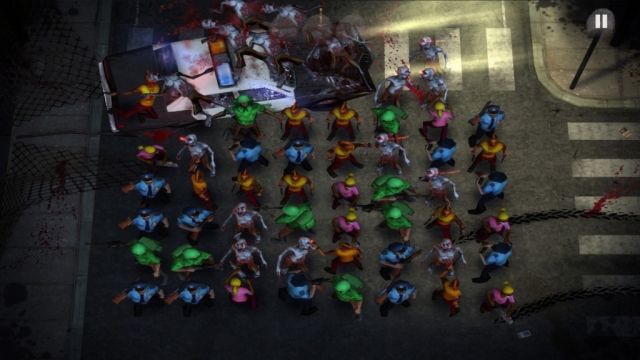 One additional more complaint I have involves Containment's its loosely attached storyline. The game doesn't feature a main entourage of characters, and is narrated from the perspective of an anonymous survivor. Mostly, the game's storyline consist of someone recalling events, spitting out a line or two between puzzles. At first, these lines are intriguing. The introductory chapter, for instance, speaks of the survivors' attempts to take out as many zombies as possible, before getting out of Dodge. Watching their intricate, albeit futile plans unfold is pretty neat. However, before long the game descends into predictable, contrived scenarios that feel like the writer was attempting to pad the story out as much as possible. After leaving town, the ensemble enters a variety of other regions that, big surprise, turn out to be infested with zombies. Along the way, they stumble into a boat load of dead ends and run afoul of several unexpected new hazards, yet always happen to accidentally find a way out. Suffice it to say that, while the presence of a narrative is fresh and somewhat appreciated, it still could use some refinement.

Containment: The Zombie Puzzler is a fair puzzle title that's worth a quick peek. Puzzle die hards and zombie enthusiasts may enjoy it more than anyone else, but they may still notice that the game is hardly a replacement for titles like Tetris, Dr. Mario, or even an obscure title such as Dead Hungry Diner. Still, that the developers took a few unexpected routes in crafting this game is laudable, even if the finished product isn't as spectacular as it should have been.

If you enjoyed this Containment: The Zombie Puzzler review, you're encouraged to discuss it with the author and with other members of the site's community. If you don't already have an HonestGamers account, you can sign up for one in a snap. Thank you for reading!

© 1998-2021 HonestGamers
None of the material contained within this site may be reproduced in any conceivable fashion without permission from the author(s) of said material. This site is not sponsored or endorsed by Nintendo, Sega, Sony, Microsoft, or any other such party. Containment: The Zombie Puzzler is a registered trademark of its copyright holder. This site makes no claim to Containment: The Zombie Puzzler, its characters, screenshots, artwork, music, or any intellectual property contained within. Opinions expressed on this site do not necessarily represent the opinion of site staff or sponsors. Staff and freelance reviews are typically written based on time spent with a retail review copy or review key for the game that is provided by its publisher.