If you could pick just one thing for people to know about you when they pass you on the sidewalk, what might it be?

In Watch Dogs, you'll meet many strangers in the virtual streets of Chicago, circa present day in a slightly altered reality. You can pull out your Profiler, which is really just an app on your smartphone, and you can hack into cameras or just scan people as they go about their daily business. That woman seated on the bench to your left, talking to her friend? She traveled to Iraq last year. The friend? He sculpts nudes.

You'll meet a lot of people that way: as a throwaway label on your phone. The person shuffling down the alley? Transgender. The man who angrily honked his horn at you when you headed across the crosswalk? He's a youth leader at the local church. None of them know what you see. You are a voyeur named Aiden Pearce. You are searching for the man who killed your niece a year ago, and for the ones who put him up to it. You don't really care if the businessman frequently purchases anime, if the woman in the business suit watches fetish porn. You don't care, but does that make your secret knowledge any less unsettling? 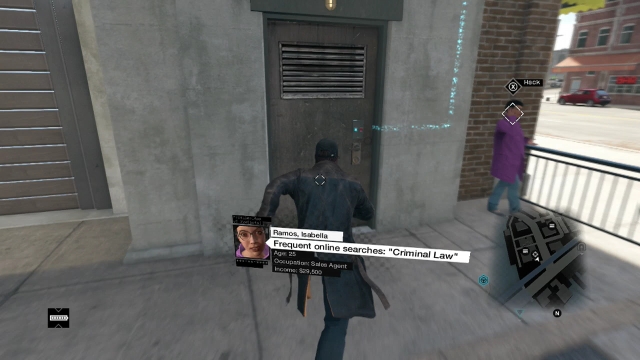 Watch Dogs tells the cautionary tale of a convenient city, managed by a corporation called Blume. The technology (known as ctOS) is supposed to make everyone safer, and it saves the city a pretty penny, but at what cost? The most alert citizens are rightfully concerned that maybe they gave up just a little too much in exchange for their comfort. They worry that people such as Aiden Pearce might exist, and you know they're right to do so.

So there are a lot of themes in Watch Dogs, carefully woven together in a way that can't help but resonate with anyone who cringes at the thought of airport security or just the amount of information that you can find about anyone with a quick Google search. The writers and the artists and the scenario designers all did a good job in that respect. Play for long enough, pay enough attention, and eventually you'll be made uncomfortable by something you see or hear, by the implication of it all. Maybe you'll even play a part in it. But will you have fun?

I certainly did, most of the time. As I played and as I put together my Watch Dogs strategy guide, I took delight in hacking cameras and warping from viewpoint to viewpoint, examining my surroundings while Aiden crouched behind building pallets (they're the new crates) at a safe distance. I would overload an electrical box as a meddlesome guard approached it, and then he was no longer a problem I would have to deal with later. I would hack into a phone so a patrolman would look down at his ringtone, and I'd run by him while avoiding violent conflict. Most of all, I liked that there were often multiple ways to approach a situation. If I wanted to infiltrate a complex, sometimes I could reach my destination without firing a shot. In other instances, I would gun everyone down and steal a vehicle, then drive out of the facility and lead the cops on a chase that ended with me jacking a boat and cruising down the river while a chopper circled overhead. 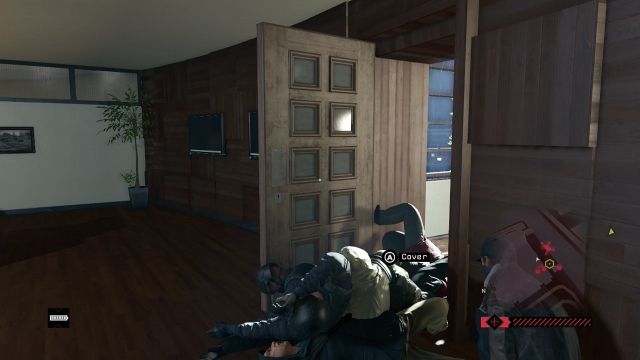 There's a thrill that comes from being bad in this version of Chicago. It's fun to be jacked into the system, to have so many resources at your disposal and to use them to stay one step ahead of the authorities. While that thrill lasts, Watch Dogs is one of the most satisfying open world games I've ever played.

When you get right down to it, there are only so many ways to tackle any mission in Watch Dogs. The two most obvious ones are the Rambo and the computer hacker options I already mentioned. The third choice, pure stealth, is so dreadfully tedious that I was always happy when a mandatory instance reached its conclusion. Fortunately, such moments are the exception rather than the rule. The problem is that there's still plenty of time for everything to get old in even the 8 or 10 hours it might take to clear the core campaign. Then you can spend another 2 or 3 times that many hours on all of the optional stuff, which takes up more than 2/3 of the game and finds you performing the same basic actions with slightly different justification.

To the developers' credit, Chicago feels more alive than any city I've encountered in a game. It's a cross between Hong Kong in Sleeping Dogs and Los Santos in Grand Theft Auto V. The level of detail is easy to take for granted. Sometimes, even after I had put dozens of hours into my session, I would notice something new: a waitress wiping down the table in front of a street-side café, or a woman telling a story I hadn't yet heard about her young child trying to get out of going to school, or bits of litter blowing in the street. Certainly, there's a lot of repeat content, but the sheer volume of unique conversations and animations and buildings is astonishing. 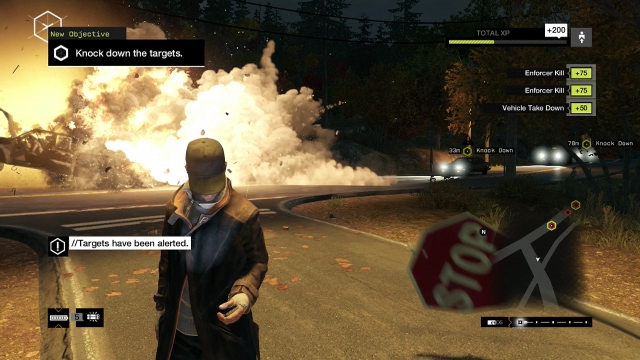 There's also an online component, which I mostly avoided but couldn't escape entirely. Whenever you're playing and not actively working on a story mission, there's the chance that you'll be invaded by another online player (known as a "Fixer"). He or she can then try and observe you from a short distance, with the goal being to hack your phone. If time expires before you find the guilty party, you lose reputation points. If you are able to spot the Fixer, you can take your best shot at a lethal response. There are variations on those missions, too, and they can keep you busy long after you've finished your regularly scheduled tour of Chicago.

Famously, Watch Dogs was delayed just before its release last year. The developers gained time to add a bunch of refinement and content. I don't know how they spent those extra weeks, but I do know the end result is an impressive achievement. It's just not always as enjoyable as I would have liked, but I'm not even sure what I would suggest that might fix that. A larger city? I'd hate to give up the personality that permeates Chicago. Fewer mandatory stealth segments? Well yeah. But it's not like they're common enough to be a huge issue. More variety? I'm not sure a bunch more mini-games would have had a positive impact on the overall experience.

Whatever Ubisoft decides to do with a sequel, one thing is apparent: Watch Dogs is a great start to what will almost certainly become a beloved franchise, given time. It capably imagines an alarming near future and wraps that in solid gameplay mechanics that give even the Grand Theft Auto games a run for their money. I'll be interested to see what happens next. I'm pretty sure Ubisoft already knew that, though, because I had my Kinect camera enabled the entire time I played

If you enjoyed this Watch Dogs review, you're encouraged to discuss it with the author and with other members of the site's community. If you don't already have an HonestGamers account, you can sign up for one in a snap. Thank you for reading!

© 1998-2021 HonestGamers
None of the material contained within this site may be reproduced in any conceivable fashion without permission from the author(s) of said material. This site is not sponsored or endorsed by Nintendo, Sega, Sony, Microsoft, or any other such party. Watch Dogs is a registered trademark of its copyright holder. This site makes no claim to Watch Dogs, its characters, screenshots, artwork, music, or any intellectual property contained within. Opinions expressed on this site do not necessarily represent the opinion of site staff or sponsors. Staff and freelance reviews are typically written based on time spent with a retail review copy or review key for the game that is provided by its publisher.