There is a typographical error on a loading screen in Yaiba: Ninja Gaiden Z. The word resilient is spelled resiliant in a message offering a general hint about the game. Staring at that typo, time after time, death after death, one begins to meditate on what could have been. Seeing that a that should be an e, one thinks back to the death that brought him to it. Perhaps this time it was a well done and challenging fight against a couple of major foes that became impossible when the camera switched to a confusing and ineffective view. Or, maybe, the death came suddenly in an epic battle, when the player seemed to have finally mastered the most effective order in which to take out successive waves of enemies, only to have a critical dodge ruined by a glitch that let the dashing animation run, but did not allow Yaiba to move anywhere.

Possibly the player made it through these difficulties and the load screen is displaying while the game is busy preparing a new level to load. In that case, the player may be thinking of the many gag cutscenes he has just witnessed, how they were almost funny, but just a little too tasteless. Or, if the completed level in question was the first, maybe he will consider that bit of dialog about the Russian troops in Ukraine, and squirm, but not put down the controller, giving the game the benefit of the doubt about that thanks to its ship date and the difficulty in recalling it, given recent events.

Not to belabor the point, but the aforementioned typo, popping up as it does continually throughout the game, is a perfect, almost poetic encapsulation of the problem with Yaiba. Like the camera angles that shift unexpectedly and prevent the player from seeing his attackers mid-fight, like the humor that just misses the mark, like the leveled-up skill perk that is not quite useful enough to use, it is a problem that someone should have noticed and fixed. 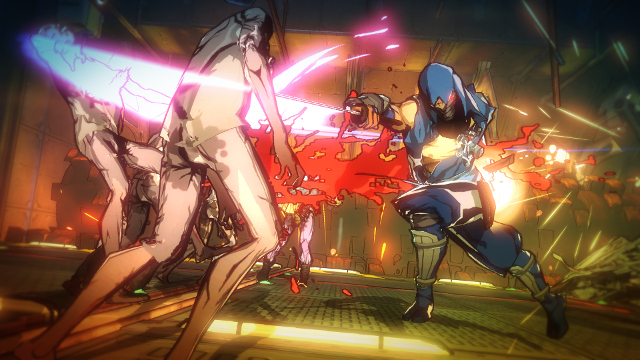 This review would be very different if someone had only said:

In this area, lock the camera here until all enemies are defeated.
Increase the damage on the leveled-up version of that special weapon so that it produces an actual improvement.
Edit out that unfortunate dialog about Russians in Ukraine.
For God's sake, fix the typo on the loading screen tip!

Though it would seem none of the above phrases were ever spoken during its development, Yaiba: Ninja Gaiden Z is not a terrible game. There is a lot to like about it, even. The action and humor certainly have many moments when they do come together and shine. Take the opening cinematic, for example, which features Yaiba cackling like a madman while he is cut in half amidst an explosion of blood. It's funny, exciting, and a perfect setup for a fast paced action game. That action itself is also intense, challenging, and rewarding... when you are fighting hordes of enemies and gigantic bosses instead of the camera and the controls.

The gameplay also works well when Yaiba begins to fight many different types of enemies at once. The first few levels spend a lot of time teaching the player how to use the special weapons Yaiba attains when performing QTE executions on powerful enemies, and how to use those weapons against certain enemy types to create powerful effects. Unfortunately, the game does not let you fully exploit this mechanic until the penultimate level. There, nearing the finale, the player is forced to fight his way through wave after wave of enemies boasting numerous different elemental abilities and weaknesses, many of whom were featured as bosses in the earlier stages. The level of challenge is perfect, and seeing two or even three of the larger enemies the player struggled with earlier go down after a well planned and executed elemental strategy pays off is immensely satisfying.

That is, until a camera or control issue ruins the fun. During one particularly intense fight against a major boss, I ran to the top right portion of the screen. The camera shifted to a new perspective that did not show the majority of the arena in which I was battling. Unable to see the boss, I was swiftly killed. The change was much worse than the other camera issues I had experienced prior to that point. Thinking that it had to be an isolated glitch, I returned to the same spot only to have the perspective switch yet again. Nothing I could do would change that perspective back, and the fight was truly impossible once the switch occurred. As it turned out, the perspective change was necessary in order to show a new area after the first part of that fight concluded. 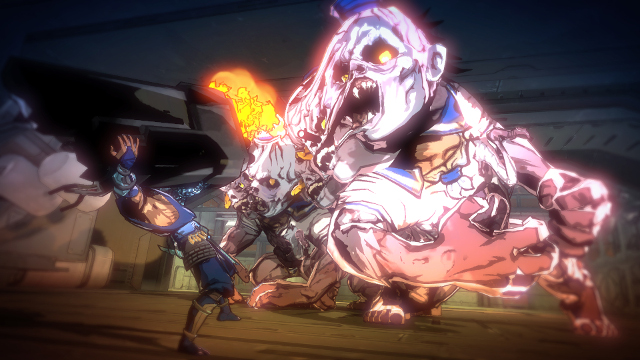 I do not know the technical considerations and amount of effort that would be required to prevent this perspective change until the first phase of the battle ends. Sometimes, in a piece of complex software such as a video game, seemingly simple changes have myriad unexpected consequences and what appears to be a simple fix to an outsider is actually extremely difficult to manage. But, in a game that has a typo on a loading screen, how can one have confidence that the problem was even recognized?

I doubt that it was. And it's a shame really, because with a little more polish this could have been a good game. With a lot more, it might even have been great

If you enjoyed this Yaiba: Ninja Gaiden Z review, you're encouraged to discuss it with the author and with other members of the site's community. If you don't already have an HonestGamers account, you can sign up for one in a snap. Thank you for reading!

© 1998-2021 HonestGamers
None of the material contained within this site may be reproduced in any conceivable fashion without permission from the author(s) of said material. This site is not sponsored or endorsed by Nintendo, Sega, Sony, Microsoft, or any other such party. Yaiba: Ninja Gaiden Z is a registered trademark of its copyright holder. This site makes no claim to Yaiba: Ninja Gaiden Z, its characters, screenshots, artwork, music, or any intellectual property contained within. Opinions expressed on this site do not necessarily represent the opinion of site staff or sponsors. Staff and freelance reviews are typically written based on time spent with a retail review copy or review key for the game that is provided by its publisher.