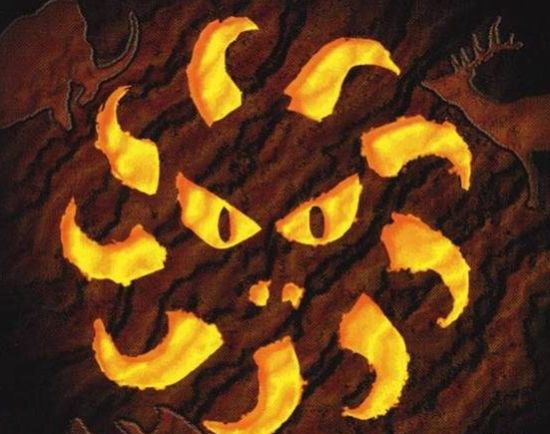 Long before I would ever hotwire a car and use it as a murder weapon...

Eons prior to my stint as a dragon slayer and shouting viking...

...I played an open world game on--try not to cringe--the original PlayStation. Entitled Tail of the Sun, the game puts you in charge of a clan of Neanderthals who desire to erect a mighty tower out of mammoth tusks in order to reach the titular star. You accomplish this by running aimlessly until you happen upon a wooly mammoth. From there, you bash the beast to death by repeatedly mashing the attack button, allowing you to steal its ivory. Repeat the process about a dozen or so times and the game will reward you with an unsatisfactory cutscene. That's it.

"Ah, but it's an open world game, Joe. There's always more to do than complete the main quest line!" you might say.

Correct! Tail of the Sun does offer much in the way of distracting side events. For instance, you can wander its world endlessly, picking off as much of the local fauna as you wish. You could even make a little game out of trying to discover all of the animals. When you're done with that, you can commence devouring every different type of rice cake-inspired plant found throughout the game. After surmounting that chore, you can set out on numerous voyages to locate various Easter egg scattered throughout the land. For instance, you can head to an island in the northeast that holds a giant stone eyeball. What's that? Reward? Oh, my friend, seeing the eyeball is all the reward you'll need! 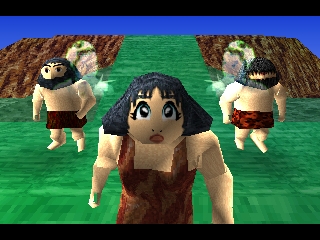 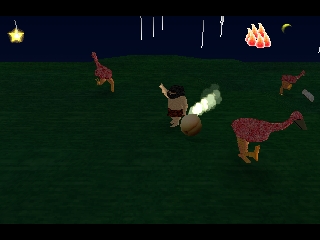 All sarcasm aside, Tail of the Sun features a dearth of activities. There are no mini-games to engage in or side quests to undertake. You simply run around and look at objects, some of which are edible.

As if the aforementioned tasks weren't tedious enough, your character also requires sleep. I don't mean the Final Fantasy kind of sleep, with charming music and a quick fade to black, either. Your caveman literally passes out, sometimes without warning. You can wake him up by pressing buttons, but doing so too often will result in his death from exhaustion. What's even worse about this is that falling asleep leaves you vulnerable to predators. I've had more than a few occasions in which a smilodon dined on my corpse after I fell asleep next to him.

Sleeping isn't the worst of Tail of the Sun's sins, though. The real killer is the camera. Unlike most open world games, Tail of the Sun does not allow you to rotate the camera 360 degrees, or even at all. You can pan the camera around a little bit by holding the shoulder buttons, but it will return to its original position once you release them. In other words, if you wish to travel south during your adventure, you have to charge blindly toward the bottom of screen and pray that you don't run afoul of anything dire. 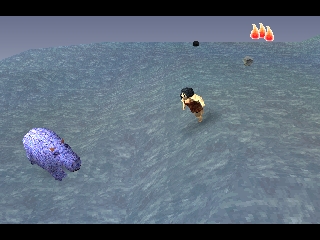 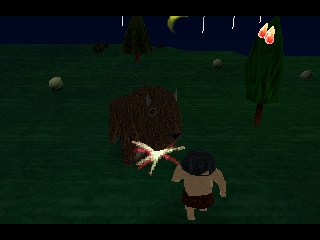 This especially makes for an irksome experience when exploring caves. Most caves can only be entered by walking northward into their mouths. This means you inevitably have to travel south to exit them. Since you can't rotate the camera, you can't see where the exit lies. Also take into account that a few of the caves are fairly complex networks of corridors and chambers, many of which require you to walk north. As you can imagine, this means you'll have to head south numerous times when you wish to exit, which often leaves you awkwardly brushing against numerous southern walls in an effort to find a hallway that might lead out (and hopefully not deeper into the cave). Sadly, in some caverns it's more likely that you'll starve than see daylight.

"But Joe, what about the simulation elements the game boasts? You can develop your clan's culture and acquire new huts and weapons and..."

Tail of the Sun's simulation elements are tacked on at best. By gorging on certain plants, you can develop one of your body's functions, intellect being amongst them. As you further your mental capacity and hunt for meat, you'll gain a "culture level." All this means is that you'll gain a new weapon and huts will start appearing around your clan's territory. You don't obtain any other neat gizmos, nor undertake any deep decision-making for the tribe. Nearly everything is automatic.

What's worse about developing culture in Tail of the Sun is that it's practically required. Though you can technically beat the game without advancing your culture, killing mammoths is much easier if you have a spear. That requires you to commit to repeatedly eating brain food and hunting until you're blue in the face. Even with a special tattoo that helps boost your intellect (there are others as well with a variety of advantages), you still spend most of Tail of the Sun waiting for a cultural breakthrough.

Perhaps the most irritating thing about leveling up, though, is that experience is not displayed anywhere. You have to guess when you're close to a cultural level, and at times it feels like one will never come. 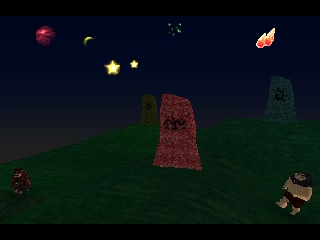 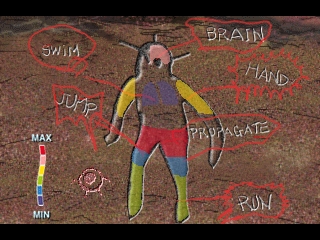 "But the visuals are gorgeous!"

They're certainly colorful. I do commend the developers on their enemy designs, as they fashioned the various creatures that Tail of the Sun sports after cave paintings. However, the graphics are horribly dated and boxy as all get out. This is especially evident in the Neanderthals and their painted-on faces. The only thing worse is the game's main theme, which sounds like kazoos and bongos played by a drunken orchestra.

There's a fair amount to see, little to do, and almost nothing to accomplish in Tail of the Sun. Worse, you have to struggle with a terrible camera, a banal combat system, lackluster simulation elements, and lengthy periods spent staring at the screen while your chief slumbers. In all of my travels through Tail of the Sun, I have found only one thing actually noteworthy: what I call "butt-monsters." In some areas, you can spy what appears to be the lower half of a man hopping up and down. Nail this creature and it'll emit a creepy laugh comparable to that of a submerged clown. Although this is grade-A nightmare fuel, it's far more interesting than anything else that Tail of the Sun has to offer.

If you enjoyed this Tail of the Sun review, you're encouraged to discuss it with the author and with other members of the site's community. If you don't already have an HonestGamers account, you can sign up for one in a snap. Thank you for reading!

© 1998 - 2022 HonestGamers
None of the material contained within this site may be reproduced in any conceivable fashion without permission from the author(s) of said material. This site is not sponsored or endorsed by Nintendo, Sega, Sony, Microsoft, or any other such party. Tail of the Sun is a registered trademark of its copyright holder. This site makes no claim to Tail of the Sun, its characters, screenshots, artwork, music, or any intellectual property contained within. Opinions expressed on this site do not necessarily represent the opinion of site staff or sponsors. Staff and freelance reviews are typically written based on time spent with a retail review copy or review key for the game that is provided by its publisher.