Dystopian cities are a common theme in videogames, whether portrayed as merely grim and corrupt or as outright post-apocalyptic. Vector takes apparent inspiration from DICEs first-person city platformer game, Mirrors Edge, where an ostentatiously pristine city curtails the freedom of its citizens, where all communications are tapped and where dissent to the authoritarian regime carries the punishment of death.

The thematic similarity between the two games is striking. In Vector, an unnamed freedom fighter casts aside his mind control device and spends his time running from the police. The fluid side-scrolling adventure requires constant movement, and the protagonist must regularly outfox the pursuing troops in order to eventually find his way to freedom. 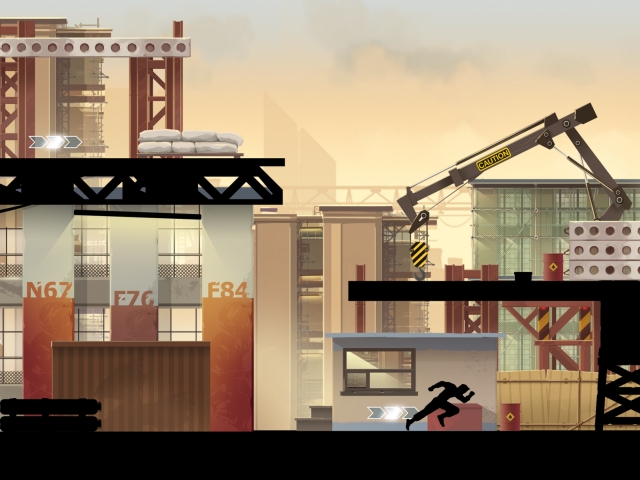 Vector presents a welcome twist to the traditional platformer, in the form of a unique graphical style. Foreground level elements and characters are silhouettes placed in front of different urban backdrops: downtown, a construction yard and a technology park. Since the character never stops, controller input is only required to perform jumps and slides, or to slow down the rate of progression. The primary goal within a level is to reach the exit and thus earn a star, but extra objectives also must be completed in order to unlock new stages. Collectable coins can purchase certain tricks that can then be utilized in levels, in turn unlocking another star if theyre all performed at designated points, but a perfect streak is only possible if every hidden box within a given level is also found.

Although most tricks require little effort to execute, many jumps still require precise timing, especially when the player is collecting the aforementioned boxes. As the game progresses, level paths become more open, obstacles grow more punishing and tricks become more expensive to purchase. Levels need to be attempted multiple times just to allow the player to accumulate enough coins, although few stages will likely be cleared on the first try, anyway.

Vector humorously rewards failure, at least. Achievements are awarded for dying a certain number of times, breaking a set number of windows and even for merely skimming a level without collecting anything on the way. The game can be cleared in a few hours by players who are interested in meeting only the minimum requirements, but perfectionists will spend a lot longer collecting all the boxes and tricks. 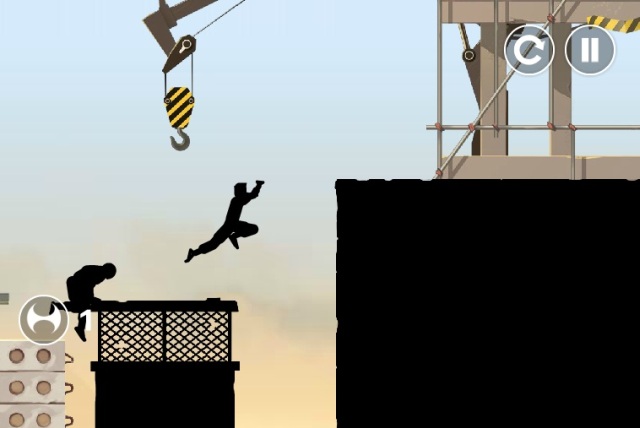 Vector does a great job of providing an entertaining experience where only the arrow keys need be used. The learning curve is just right, too; wall jumps and sudden turns are gradually added to throw a player off-course without leaving him utterly lost, as are expansive stages that offer multiple decoy pathways alongside the proper route. In spite of the silhouetted graphics, the physics feel quite realistic. Crashing into a wall is extra humiliating, as the runner drops like a ragdoll, and smashing through windows provides a real thrill. The same cant be said about the background music, though, which gets repetitive quickly because there are only two accompanying tracks.

All-in-all, Vector is a subdued thrill ride. It may not provide much incentive to spend the time that is required if you want to unlock everything, but it offers a fun respite, nonetheless.
3.5/5

If you enjoyed this Vector review, you're encouraged to discuss it with the author and with other members of the site's community. If you don't already have an HonestGamers account, you can sign up for one in a snap. Thank you for reading!

© 1998-2021 HonestGamers
None of the material contained within this site may be reproduced in any conceivable fashion without permission from the author(s) of said material. This site is not sponsored or endorsed by Nintendo, Sega, Sony, Microsoft, or any other such party. Vector is a registered trademark of its copyright holder. This site makes no claim to Vector, its characters, screenshots, artwork, music, or any intellectual property contained within. Opinions expressed on this site do not necessarily represent the opinion of site staff or sponsors. Staff and freelance reviews are typically written based on time spent with a retail review copy or review key for the game that is provided by its publisher.