Psychosis by NAXAT Soft left me feeling a bit uninspired, perhaps because I had somewhat unrealistic hopes for it. I was intrigued by the games concept. Youre flying a ship through your own mind in an attempt to drive away some sort of demon-alien that is looking to take it over. Its easy to imagine oneself soaring through fanciful levels designed to represent a common fears, regrets and other strong emotions.

REALITY CHECK: Psychosis was released in 1990, for the Turbografx-16. There are five horizontally-scrolling stages (fancily called "Causes") that tend to peak at being just slightly weirder than those you might encounter in the typical shooter, and that's about it. Not only is the game short, but it's also not overly difficult. Some of the bosses are tough and there are tricky parts scattered throughout the levels, but there also were lengthy stretches where anyone with a reasonably powered-up ship could cruise through effortlessly. It all makes for a decent diversion for a rainy day, but this isn't one of those shooters I envision myself returning to from time to time, and it doesnt leave me excited to encourage others to try it.

Brevity was one problem, since five levels arent really all that many to go through, but the game's biggest flaw likely is its failure to capitalize on the fanciful premise. That first level did have its moments, though. Youll spend it flying over a beach-like setting with water in the background, while various grotesque critters swarm all over the place (and each other). At the top and bottom of the screen, holes have been ripped into the background, where you'll see nothing but star-filled space. As you get close to the boss, purple rock-like crags burst onto the screen from the top and bottom, completely mindless of just how out-of-place they seem against the provided backdrop. Yeah, the first level does a decent job of delivering a taste of the insanity caused by a mind corrupted. 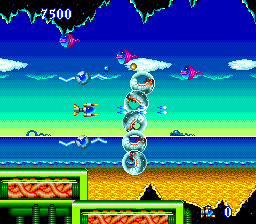 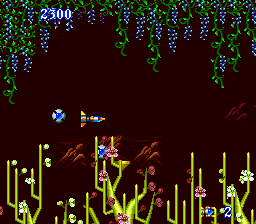 The thing is, that introductory stage is the most creative of the five. The second Cause is a fairly unremarkable forest level only salvaged by its cool ghost fox boss. Graphics-wise, the third zone is essentially the same as the first, but with the addition of blocks scattered throughout it to serve as obstacles. Moving to the fourth Cause, you'll go through a somewhat neat temple in what might be the game's most claustrophobic and challenging stage, before finishing things off with one of those organic cave-like places that tends to find its way into nearly every shooter. Occasionally, Psychosis shows a decent bit of imagination, but more often than not, a "been there, done that" feeling pervades. I mean, in Life Force, the game inexplicably took me through an Egyptian-themed stage that probably was as imaginative and out-of-place (and more fun) than any of this game's Causes and Konami wasn't even playing the "fighting throughout your mind" card!

Don't get me wrong, though. I'm not just reviewing this game in order to vent like some common curmudgeon. It was a reasonably fun experience, just not what I was expecting (or maybe I should say "hoping for"). The weaponry system was based on R-Type's, where you collect a couple pods and they handle the bulk of your offensive with various types of fire. While I tended to spend most of my time with the one that allowed me to put a lot of big bullets in the air in order to wipe out foes quickly, I have to admit I had a certain amount of fun with another one that's almost an electric shield.

When you fire shots while that power-up is active, your pods (which can be rotated around the ship) will emit beams of electricity on two sides. It's the sort of short-range attack that can make a crowded screen cluttered with enemy fire terrifying to navigate, but at times, its invigorating to use it a gambler's dream. The first boss of the game is a giant eye and, like many first bosses, it's not all that tough to beat. But with this power-up, the confrontation is at least fun! I flew up to it, so one of my beams was in constant contact with it, and then I just glided in synch to its movements. It wound up being the sort of easy kill that's fun simply because you're putting yourself in some semblance of danger instead of holding back and peppering your foe with fire from a safe distance.

Some of the bosses were pretty challenging, too, in that you have to be very precise in your movements to avoid them and their attacks. In fact, most of this game's difficulty came from having to be on point while moving through areas where there simply wasn't room for error. In the fourth Cause's temple, you'll regularly see a mask floating in from the left in two parts. You have to QUICKLY fly between its halves before they snap down and take a life, while often also having to account for other foes floating around the vicinity. Then you'll advance to the fifth level and discover that, as is commonly the case when it comes to organic cave-like places, parts of the ceiling and floor will quickly converge on the center of the screen. If you know where these points are, it's easy to be past them before this happens; if not, you'll have to squeeze through a space so tight that being off by half a ships length is fatal.

Psychosis is a decent, but not particularly great, shooter. While you can dismiss my complaints about the game not being as bizarre as we ought to expect from a title that purports to take place in a persons mind, the fact that the experience only consists of five levels can't be disputed. What I played was perfectly respectable fun, but lacked a bit too much for me to see it as anything more than a brief diversion. In an era where many very good shooters were released across multiple platforms, this one rates as little more than a decent one with unfulfilled potential.

If you enjoyed this Psychosis review, you're encouraged to discuss it with the author and with other members of the site's community. If you don't already have an HonestGamers account, you can sign up for one in a snap. Thank you for reading!

© 1998 - 2023 HonestGamers
None of the material contained within this site may be reproduced in any conceivable fashion without permission from the author(s) of said material. This site is not sponsored or endorsed by Nintendo, Sega, Sony, Microsoft, or any other such party. Psychosis is a registered trademark of its copyright holder. This site makes no claim to Psychosis, its characters, screenshots, artwork, music, or any intellectual property contained within. Opinions expressed on this site do not necessarily represent the opinion of site staff or sponsors. Staff and freelance reviews are typically written based on time spent with a retail review copy or review key for the game that is provided by its publisher.