I knew I would be hooked, for better or worse, to Red Faction: Guerrilla the instant I swung my hammer and pulverized a wall. For I realized then that almost every man-made structure was destructible. From that moment onward, no fortress, derelict hut, ammo dump, shipping crate, or office building was safe. I remember the first victim of my lust for destruction very well. It was an abandoned laboratory campus in the game's tutorial. Oh, the fun I had gallivanting about that complex and bringing down silos, catwalks, and whole facilities! The simple, cathartic pleasure of smashing everything to bits was a powerful force, one great enough to carry me through the campaign. For I knew eventually the game would provide me with cooler toys to play with and bigger blocks to knock over, and that I would see my opposition literally crumble as a result of my hunger for demolition.

Now and then I'd jump into a vehicle, go for a long drive across Guerrilla's rugged open world, pull up to an arbitrary building, and commence obliteration. I especially had an affinity for towers. I'd toss manually activated explosives onto the lower levels of a tower, back away, and let 'er rip. A chorus of explosions would sound, the immense structure would teeter, tilt, tumble, and finally crash onto a few nearby guards who happened to be taking potshots at me. Sometimes I'd pull up to a walled fortress and cut loose a rocket, creating a hole in its defensive barrier. From there I'd sneak in, toss out some singularity bombs, brandish my hammer, and use it to raze enemy vehicle ports, barracks, and command centers.

My favorite moments, though, came after I received the Nano Rifle. This puppy fires bullets that erupt into swarms of hungry little automatons called "nanites." These nanites devour just about anything, from refined steel to human flesh. Having secured the rifle, I decided to take a ride out to a certain memorial bridge--one of many destroyable monuments whose destruction nets you a little respect from the game's rebel forces. Where before even my rocket launcher couldn't faze the bridge's reinforced beams, I saw the nanites happily dining on them. Before long, the bridge began to whine, then to shift, and finally to rain down in the canyon below in tiny pieces. Foes came to stymie my assault, but most of them disappeared as clouds of nanites chewed through their armored suits and gorged on their entire bodies, leaving behind not a single speck. 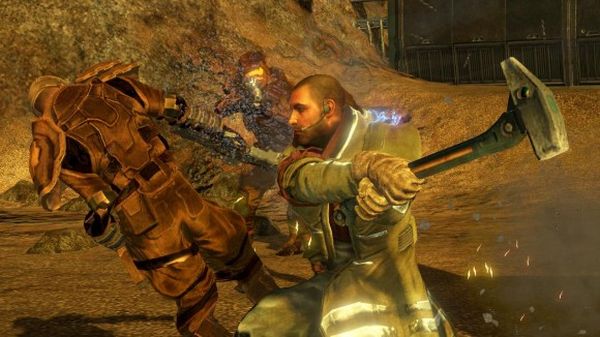 As I crushed monuments and engaged in side missions, I gained more support from the rebellion on Mars and rallied rebels to my cause. Together, we bravely fought off companies of soldiers armed with lasers. Sometimes I plugged a few Nano Rifle shots into them, despite the rifle's horribly low fire rate. Most of the time, though, I stood back and lobbed bombs, then watched my opponents' corpses fly across the battlefield with each deafening report. When I grew tired of that, I sneaked behind enemy lines and shattered my foes' backs with swings from my upgraded hammer.

I had a blast engaging in a few other activities as well, like undergoing a few one-man suicide missions into enemy territory during story events, or annihilating opposing forces from the cushy seat of a mech. I also dug "Collateral Damage" missions, which were rail shooter segments that required me to eradicate as many marked targets (i.e. enemy-owned real estate) as possible. They reminded me of the "Septic Avenger" missions from Saints Row 2, as the objectives in both mission types were similar, except that I didn't get to spray liquid feces on government buildings and corporate fat-cats in Guerrilla. I wish I could say that the entire Guerrilla experience was awesome, but sadly the game's greatness takes a few dips throughout its campaign.

As I mentioned before, Guerrilla is an open world game, and therefore benefits from featuring an opulence of addictive distractions and things to tinker with. As it turns out, this is where the game is lacking. While many of Guerrilla's side missions were amusing, there are several kinds that are wearisome affairs to undertake. For instance, one of my least favorite activities involved liberated house-arrested rebels. This usually meant fighting off swarms of troops without much assistance, untying hostages, and guiding them back to my vehicle through a hailstorm of bullets, all the while hoping that no one died. 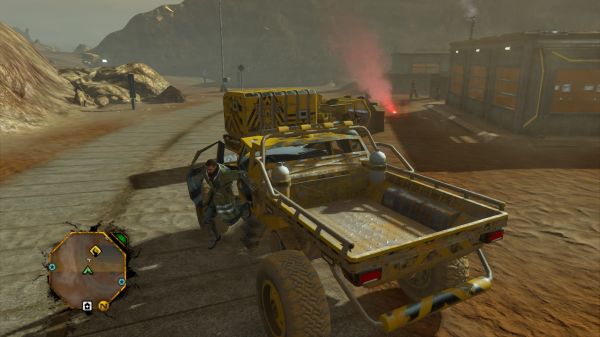 The problem is that some of the House Arrest missions rely overmuch on you having gained respect with the region's rebels, which can be acquired by completing other side missions. As you increase rebel respect, more of them will randomly fight alongside you. Believe it or not, they're actually quite effective as brothers-in-arms, at least in distracting the opposition while you stage a getaway. However, any time you die or fail a mission, you lose respect. If you engage in a tough House Arrest event and continually die, less and less rebels will fight alongside you, thereby increasing the mission's difficulty rating. It was thanks to this notion that I gave up on House Arrest missions and ended up avoiding them all together.

Other missions types were a little more banal, including one that revolved around delivering vehicles to specific areas (usually way the hell away from the starting points) while abiding time limits. I found that I didn't come across much opposition when dealing with these missions, so they were really little more than long, tedious drives across desolate terrain I'd already seen dozens of times before. Another mission I hated doing, and therefore skipped, involved attempting to halt a courier who had stolen top secret info. Although these missions were pretty easy, stopping one of these guys was a daunting process. Mainly, I felt that the courier missions didn't make the most of the game's mechanics.

...Not that I'm saying Guerrilla was a brilliant game, mechanically. It had its share of issues, most of which revolved around utilizing guns. Specifically, each gun possessed a peculiarly shaped reticle that gave me only a vague sense of where my shots would sail. Furthermore, the camera tended stay pretty far back behind my character, making it needlessly difficult to properly size up a shot. Most of the time, I just said, "Screw it," put the gun away, and chased my prey with the hammer. Besides, it was more satisfying hearing their panicked screams as I crunched their helmets with hearty thwacks. 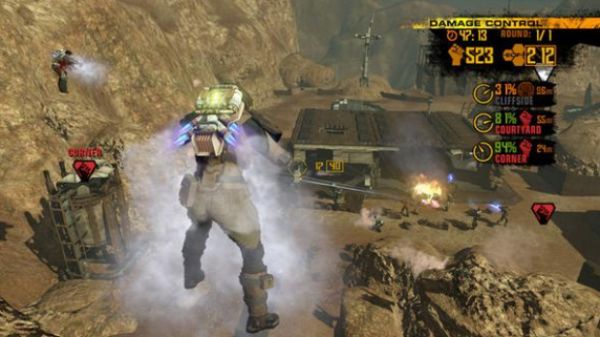 Red Faction: Guerrilla is not by any stretch a perfect sandbox title. It's addictive and entertaining, but much of the game is disposable. The best open world titles are ones that inspire you to do as much as you possibly can and provide you with a wealth of toys and distractions. Unfortunately, Guerrilla's world is mostly bereft of anything worth toying around with, outside of demolishing arbitrary structures. I wish I could say that the game's missions, as a whole, were a saving grace, but most of the side missions were either chore-like or overly frustrating. All in all, Guerrilla is a worthwhile experience, but it could have been so much more.

If you enjoyed this Red Faction: Guerrilla review, you're encouraged to discuss it with the author and with other members of the site's community. If you don't already have an HonestGamers account, you can sign up for one in a snap. Thank you for reading!

© 1998-2021 HonestGamers
None of the material contained within this site may be reproduced in any conceivable fashion without permission from the author(s) of said material. This site is not sponsored or endorsed by Nintendo, Sega, Sony, Microsoft, or any other such party. Red Faction: Guerrilla is a registered trademark of its copyright holder. This site makes no claim to Red Faction: Guerrilla, its characters, screenshots, artwork, music, or any intellectual property contained within. Opinions expressed on this site do not necessarily represent the opinion of site staff or sponsors. Staff and freelance reviews are typically written based on time spent with a retail review copy or review key for the game that is provided by its publisher.