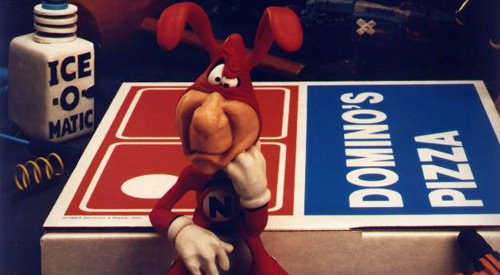 I've noticed when I chat about ancient video games with friends that the discussion eventually focuses on Capcom's impressive NES run. In particular, those involved in the conversation tend to love on Mega Man and gush over DuckTales. However, somewhere between a proclamation that Bionic Commando was awesome and the confused looks that result from someone mentioning Sweet Home, the name Yo! Noid comes up. Based on my experiences, what ensues is completely unpredictable. Responses to the title seem to vary by degrees, but most can be comfortably filed under one of three classifications. Most will dismiss the game, either because they regard it as disposable or haven't heard of it. Others will shout at the top of their lungs and awkwardly attest to the game's excellence. There are some, though, who will act as if Yo! Noid is the kind of game you don't bring up in polite conversation. "Really, Joe? What next? Details on your nasty groinal rash?" such folks might say.

Were it not for this phenomenon, I probably would have remained a member of the first group. However, after seeing a variety of reactions to the game, I had to know for myself why Yo! Noid receives such a varied reception from gamers. Having recently played through the 2D platformer, I think I've discovered why...

Mechanically speaking, Yo! Noid is sound. The control response is fairly tight, although it does feel a bit floaty when jumping. This can be especially problematic when attempting to leap onto icy, moving platforms in the second stage. The "floatiness" of your jumps might cause you to overcorrect while attempting to land on said platforms, which obviously results in sliding off and perishing. Slight floatiness aside, the game's mechanics are effective enough that stage designs and difficulty rating are the deciding factors in whether or not you enjoy Yo! Noid. Since the game's levels are pretty varied, you can expect it to draw a wide range of opinions from players. As for myself, my opinion on Yo! Noid transformed with each stage I put behind me. 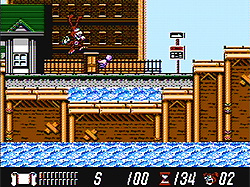 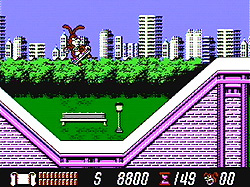 There were some levels I genuinely enjoy. One of my favorites, for instance, is an automatically scrolling stage that takes place on an enormous carousel, complete with horse-shaped platforms attached to poles. In some segments, the horses ascend and descend, forcing you to time your jumps properly in order to access lofty ledges (lest you be crushed by a wall or forced into a pit). Another challenging scene involves horse-platforms positioned above a wide chasm. Not only are the leaps between horses spacious, but the horses themselves sit a bit loosely on their poles. Linger on one for too long and it's liable to slip off, bringing you down with it.

Whenever Yo! Noid abides the principle of featuring stages that are tough-but-not-cheap, the game works wonderfully. Unfortunately, it doesn't always obey this standard. Because of that, roughly one-third of the campaign is entertaining, like the last two-thirds ranges from mediocre to downright terrible.

Few stages are what I would describe as "average." These are the short, forgettable levels filled with worn out platformer tropes, lacking any special or particularly tricky challenges. A good example would be the sewer stage, which is highlighted by vanilla jumps and mostly simple obstacles. Another that takes place on the rooftops of New York fails to implement anything interesting beyond the Noid's classic Pizza Crusher, which controls awkward and harms the experience more than it helps.

For every middling-to-good stage, though, you have another that's almost insufferable. I can think of no better candidate to represent this category than the third level, which involves negotiating a tremendous skate park whilst riding a skateboard. The worst thing about this stage is that Noid's yo-yo (his principal means of offense), has gone missing, replaced instead with a peculiar jump attack, a la Mario. That wouldn't be so bad, except it's difficult to tell which part of the skateboard you have to hit an opponent with in order to kill it. There have been times that I have landed squarely on a bird and lost a life as a result. In other cases, I ran front-first into a foe and actually defeated it instead of croaking.

Although it may sound as though Yo! Noid attempted to be as vanilla as possible, it actually tried to implement a couple of interesting mechanisms. In particular, it eschews classic boss encounters. Instead, it takes more of an Alex Kidd approach to bosses, in which you have a pizza eating contest with your opponents, as opposed to murdering them with a child's toy. The contests are presented in the form of a card game, in which your opponent selects a random numbered card. You, in turn, select another numbered card, preferably one higher than your adversary's. The contestant with the higher number then eats slices of pizza corresponding to the difference in numbers, putting him closer to filling his quota and winning the competition. 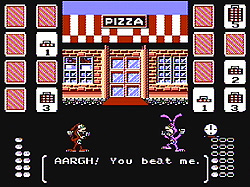 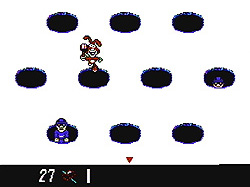 While these boss "battles" are unique, they're not all that entertaining. This is especially so later in the game, when you're pretty much expected to have discovered all of the special cards hidden throughout the stages leading up to the boss. Most of these cards can only be found by attacking the right empty space, which causes the card to manifest before you. In other words, the possible whereabouts for each card could be anywhere in the stage, and the only way that you can uncover a card's location is by attacking every open area from beginning to end. Or consulting a FAQ, of course...

Yo! Noid will enchant some gamers, bore others, and scare off the rest. I fit somewhere in the middle, entertained by some of the platformer's antics and turned off by its more infuriating stages and non-traditional boss encounters. Ultimately, I found Yo! Noid to be a wash; a crazy mix of terrific and awful that's somehow befitting of the game's protagonist. Now that I've put that ordeal behind me, I can resume regarding this game as a disposable and forgettable title during retro gaming discussions.

If you enjoyed this Yo! Noid review, you're encouraged to discuss it with the author and with other members of the site's community. If you don't already have an HonestGamers account, you can sign up for one in a snap. Thank you for reading!

© 1998-2021 HonestGamers
None of the material contained within this site may be reproduced in any conceivable fashion without permission from the author(s) of said material. This site is not sponsored or endorsed by Nintendo, Sega, Sony, Microsoft, or any other such party. Yo! Noid is a registered trademark of its copyright holder. This site makes no claim to Yo! Noid, its characters, screenshots, artwork, music, or any intellectual property contained within. Opinions expressed on this site do not necessarily represent the opinion of site staff or sponsors. Staff and freelance reviews are typically written based on time spent with a retail review copy or review key for the game that is provided by its publisher.