I dont know that Ive ever played a Pac-Man game I consistently liked better than the original one, but Pac-Man World 2 on the GameCube came closest. It showed me that Pac-Man can abandon his roots up to a point and the results can still be well worth experiencing. Unfortunately, Pac-Man and the Ghostly Adventures doesnt appear to have been handled by a team with the experience needed to produce a similar success story.

Based on the cartoon series of the same name that began broadcasting on television this past June, Pac-Man and the Ghostly Adventures is a 3D platformer starring a youthful version of the Pac-Man we know and love. There are no apparent thoughts of marriage, only a crew of semi-familiar characters--most of them ghosts--who attend the local school where Pac-Man is enrolled. From what I can make out of the story, Pac-Mans friends have been kidnapped and now he must find them while also chasing down an invention that offers whoever possesses it the ability to turn things to ice. 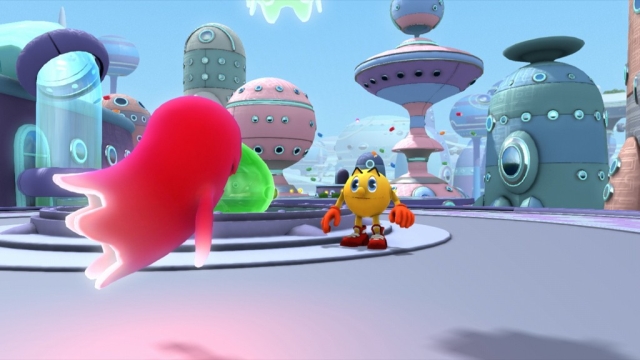 Plot isnt a big draw for someone like me when it comes to a game like this, mostly because the characters are uninteresting and difficult to identify with aside from their familiar names and general appearance. Older retro gamers who grew up playing the old arcade titles may also appreciate a few of the nostalgic elements. Youll hear the delightful CHOMP sound when Pac-Man consumes foes or the numerous pellets that litter the school (a tidy hub area) and the various regions that Pac-Man must explore. They are similar touches throughout that keep things ever-so-slightly retro, even though the bulbous hero is now gifted with an expansive arsenal of power-ups that makes him feel quite contemporary.

As Pac-Man runs and hops through the various stages, he can gobble most ghosts without incident, even without a power pellet in his possession. Certain special adversaries are the exception to that rule. Giant foes may only be damaged once they expose a weakpoint and, in the case of bosses, can often only be defeated by using weaker goons as ammunition. Even a number of common ghostly units require a special touch. For instance, a foe that likes to toss fireballs at you will cause damage if you just try to swallow him, but you can eat a pellet that lets you fire icy blasts and that changes things. Such abilities often allow you to interact with the environment, as well. Fire can melt icy columns and turn them into helpful water geysers that launch you to high ground, whereas chilling breath temporarily freezes magma to provide a pathway.

The special abilities can be somewhat cool, and you must rely on them extensively. New ones are constantly being introduced, well beyond even the games halfway point. One of my favorite pellets turns Pac-Man into a metal version of himself, so that he can attach himself to magnetic ledges and leap along them as they lead him ever upward. I have less affection for an earlier form, which grants him a chameleon tongue and the ability to briefly turn invisible. While the latter ability has its uses and even the tongue can be cool (when youre scarfing down adversaries like Yoshi might in Super Mario World), it also makes for some annoying segments where you have to swing along hooks and such to cross bottomless pits. Early on, this can be difficult to get right, but the game expects you to adapt almost immediately and punishes you with a trip back to the stage select screen if you fail too often. 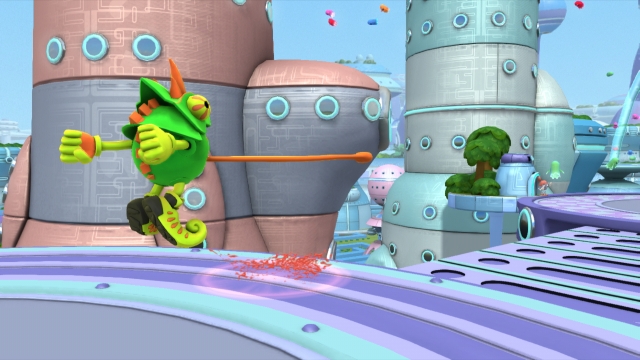 Another pellet gives Pac-Man the ability to inflate himself like a balloon, after which point he slowly loses mass and then sinks. You can press a button to expel breath, propelling him in the opposite direction he is facing, and he must then ride on gusts of wind from giant floating fans. Hell need to advance from one draft to another, collecting refills so that he can keep going, but its difficult to control him at times and he might easily miss a pellet if hes moving too quickly. That almost always spells instant death, which is aggravating as you watch your stock of extra lives dwindle for no good reason.

The issues noted above sting a bit extra in some cases, because theyre coupled with the high-maintenance camera that sticks with you throughout the whole adventure. Even simple platforming and exploration can sometimes prove tiresome. Youll round a corner and your camera will be pointed off toward the distant horizon, so you swing it around just in time to see a ghostly projectile hit you. If youve been taking damage up to that point, the damage that results from a shot you had no way to see coming could be fatal, or a brush with an unseen villain could knock you off a precipice and to your death. Its just not cool.

Fortunately, the game becomes much more manageable as you build up a supply of lives, which is most easily done by returning to the hub area after each successful mission. While you are in the midst of that detour, you can also play mini-games that are presented as arcade cabinets, once you collect enough fruit from clearing the various standard stages. Those mini-games can be quite interesting, despite also not being particularly original. The very first one youll access is a rather enjoyable Defender clone, dumbed down for a younger audience and limited to four stages, but still reasonably addictive. Unfortunately, not all arcade offerings are created equal, as youll soon find. 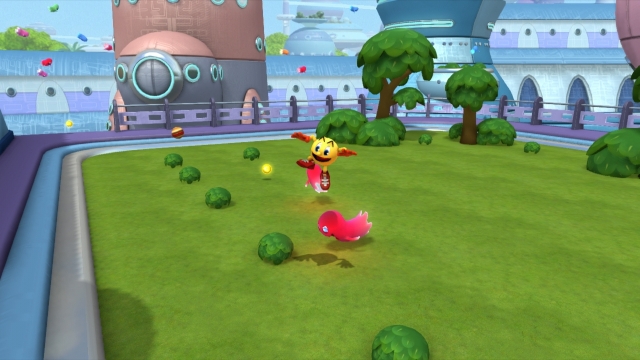 Visually, the game is more than competent, aside from occasional glitches. Pac-Man does seem to slide around his environments rather than actively wander through them, and sometimes hell pass through prizes at the end of the stage before an animation plays and shows him gulping down an oversized cherry or whatever, but mostly the characters, enemies and environments are capably rendered and should appeal to younger gamers. A few more varieties of foe wouldnt have hurt, and its a shame a number of environments are repeated, but those are relatively minor complaints. Controls are slightly floaty but they do get the job done, and checkpoints are placed frequently enough that an occasional misfire isnt the end of the world if you have an ample supply of extra lives in reserve.

Despite making necessary concessions to the old arcade brand, Pac-Man and the Ghostly Adventures feels very much like it was designed specifically for todays young gamers, and yet it suffers from awkward platforming and an inattentive camera that feels like it was ripped from the games of a decade ago. I cant imagine that the end result will instill in todays youth the same sort of affection that the original Pac-Man produced in previous generations, but its a decent enough way to while away a few hours if a person doesnt mind some rough edges. Theres also a multi-player versus mode that lets players race through mazes on a split screen, more in line with the old arcade experience, though I wasnt able to talk anyone into playing it with me. My heart wasnt in it, anyway. I was too busy thinking that what I could really go for is some classic Pac-Man action instead

If you enjoyed this Pac-Man and the Ghostly Adventures review, you're encouraged to discuss it with the author and with other members of the site's community. If you don't already have an HonestGamers account, you can sign up for one in a snap. Thank you for reading!

© 1998-2021 HonestGamers
None of the material contained within this site may be reproduced in any conceivable fashion without permission from the author(s) of said material. This site is not sponsored or endorsed by Nintendo, Sega, Sony, Microsoft, or any other such party. Pac-Man and the Ghostly Adventures is a registered trademark of its copyright holder. This site makes no claim to Pac-Man and the Ghostly Adventures, its characters, screenshots, artwork, music, or any intellectual property contained within. Opinions expressed on this site do not necessarily represent the opinion of site staff or sponsors. Staff and freelance reviews are typically written based on time spent with a retail review copy or review key for the game that is provided by its publisher.