The Guided Fate Paradox isnt pretty. Much of the adventure that unfolds over the course of the 40 or 50 hours it will most likely take you to clear the campaign occurs inside a computer simulation of sorts that displays the most important elements of a persons story and then reproduces the bare minimum amount of information possible so that you can fix problems like a wish-granting genie. So no, the game isnt pretty. Its still worth a look, though!

The hero, a 17-year-old boy named Renya, begins his story by advising you that he has had awful luck all of his life. Things finally seem to be turning around for him, though, when he wins a lottery at the mall and becomes God. That seems like it would be the ultimate get, a chance to finally make up for all of those crummy past losses, except being a deity isnt all its cracked up to be. God has only a few loyal angels who might serve him, and most of them are loyal in the sense that a hungry piranha is loyal. He also has a pressing and almost certainly fatal engagement with Satanael, a being of immense power who is eradicating the heavenly host. 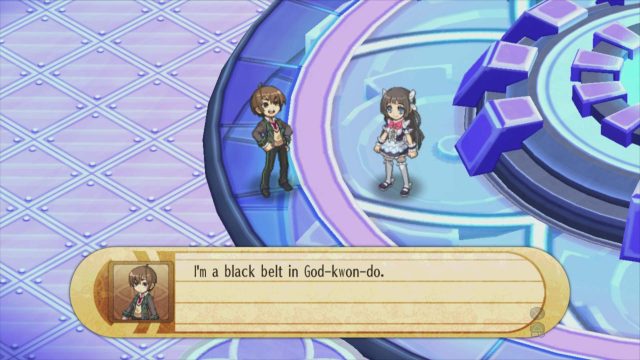 I expect that some people will consider the plot to be one of the very best things The Guided Fate Paradox has going for it, even though it does feel rather like a generic anime series. The writers spent a little too much time on the narrative, though. Structurally, it is broken into episodes (here called Lessons) and each new string of events boils down to a whole lot of talking about personal dreams and overcoming lifes challenges. The voice work is all very well done and the localization is great (watch for references to George A. Romero and the master of unlocking), but that didnt stop me from sometimes wishing that everyone would just shut up and let me get back to wandering through dungeons. I would have done precisely that, thanks to the handy Skip option, but I didnt want to miss something important.

I just mentioned wandering through dungeons, which is the bulk of the experience. Its obvious that The Guided Fate Paradox comes from the same company that made the Disgaea series, what with all the references to the Netherworld and Celestia and such. Even the visual presentation is similar in a number of obvious aspects, so that I looked at a few screenshots of the game and thought it was another SRPG. However, this new project actually falls in a different genre that Im a bit less familiar with: the rogue-like.

In The Guided Fate Paradox, you must roam through randomly-generated dungeons in search of loot and occasional plot resolution. The game Ive played in the past that this comes closest to is Torneko: The Last Hope on the original PlayStation. Every step you take, every attack you make and every item that you interact with counts as a move, and the whole process is turn-based. If you are in a room with a few enemies, taking an action prompts them to do the same. Swinging your sword (or firing your gun or whatever else) will give them a chance to retreat or advance a step, or to attack if you are within range. The system works remarkably well, because it can all play out very quickly if you want it to--for example, when there are no enemies near and youre just wandering an empty corridor--but it can slow down to suit your pace if that is preferred. 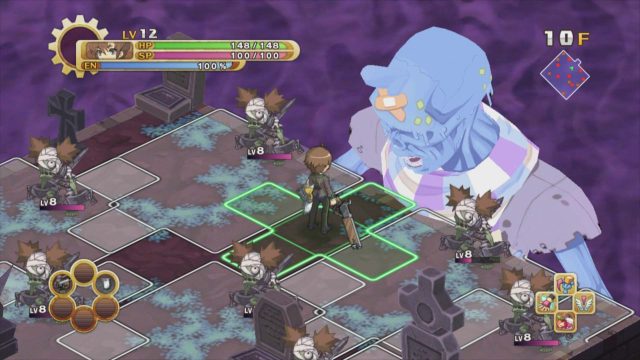 Its worth dwelling for a moment on the nature of the dungeons. Theyre really quite huge, and all of them are 10 floors deep or more (including training locations that go much deeper). Mostly, they consist of a few big rooms with hallways linking them, but the developers smartly included a few unique skins, complete with complications. In one area, for instance, you must adjust water levels to make lower and higher ledges accessible. In another, you are walking on a huge cube floating in space, so you can wrap around its underside and keep going. Boss battles are also interesting, and many of them include a unique element to keep you on your toes. You might have to guard an ally while holding off a siege, or you could be called upon to avoid attack patterns while waiting for a brief opening.

Whenever you enter a dungeon, your level starts at 1, regardless of how much experience you might have gained from a previous excursion. That system is disappointing at first, if you like to see steady advancement, but theres more to it than a simple reset. As you gain overall levels, which are tracked separately, your base stats improve. So a level 1 character at the start of the game might have 50 HP, but a level 1 character near the end of the game can easily have 700. As levels are gained, the temporary stat increase that results is based on those revised base stats. It takes some getting used to, but eventually it becomes extremely addictive because of the modifications that youre allowed to make to the main character, his support members, and his multiple sets of equipment.

Upgrading Renya himself requires you to tweak a grid of sorts, and the same is true for any companions. There are panels that initially are locked on a given grid, but you can unlock them as you gain overall levels. Then you can place tiles that affect one of the four main stats: ATK, DEF, SPD, and HIT. These are earned by using a given weapon long enough that it bursts, which grants you one of the corresponding tiles. As you place tiles and as the game progresses, you eventually gain the ability to add artifacts that grant special perks. You can improve resistance to certain status ailments, or you can increase the effectiveness of various equipment types or other things. Then you can also control the flow of energy from certain points of origin, by placing arrows and such, which makes stats grow even more admirably. 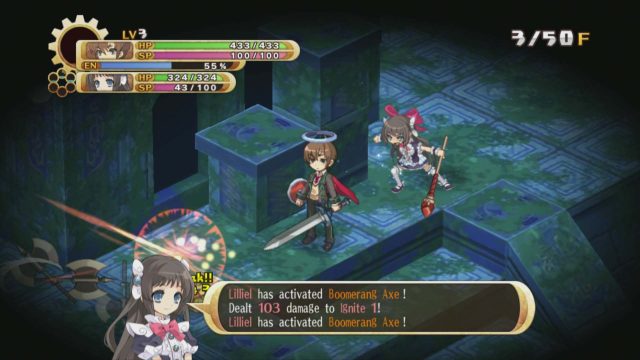 Though all of the above might sound overly complex--and Ive glossed over a fair bit, believe it or not--the way that the game ties it together feels very fresh and eventually even intuitive (even though at first, it might seem like a bit of a mess). This isnt just a copy-paste job of the latest Disgaea game with new characters inserted; its a genuinely distinct experience. The game should appeal to a lot of the same people that like that other series, though, thanks to the similar design philosophies. If you enjoy the other franchise, you probably enjoy tweaking the heck out of your units and creating a perfect warrior, and The Guided Fate Paradox manages to make all of that feel innovative again.

Unfortunately, the experience doesnt come together with quite the refinement that weve recently come to expect from Disagaea. The visuals really are disappointing from top to bottom, with only a dozen or so unique environments and a lot of recycled enemies. Characters at least change appearance depending on what they have equipped (as in Disgaea D2), but theres not a lot of unique gear. Voice work aside, the audio is almost completely forgettable, and there are deeper issues that affect gameplay, as well. 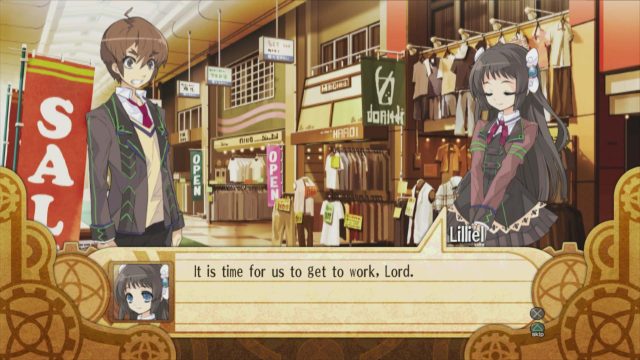 My biggest problem was how tiresome everything felt by the time I was nearing the end. The dungeons are simply too big for their own good. Exploring them takes ages, and its not like you gain enough to justify that because theyll be laid out differently when you return later and yet you have to explore each time because you wont build your levels back up from 1 if you dont. The amount of lasting growth your character gains from a half-hour or so of grinding feels insufficient, particularly before you master some of the finer points of weapon upgrading and such. If you fall in combat, youre taken back to the hub without your gear, which you might have spent literally hours improving, and then you have to decide whether to load your old save or eat the loss. It might seem like an easy decision, but sometimes you can put hours into a bit of equipment and then find it made irrelevant by a lucky find in a wandering dungeon merchants shop.

Coming up with a proper summation for the overall experience offered by The Guided Fate Paradox is difficult, because the game is so delightfully unconventional and thats not always good. I really appreciate the risks it took--many of which paid off--and I feel that it kept a lot of the most important elements that made Disgaea so enjoyable. Still, I wish more effort had been put into creating visually distinct environments and more weapons and enemies, not to mention a story that is a bit more engaging. Less expansive dungeons wouldnt have hurt, either, or perhaps even some ingeniously designed standard layouts. There are some people who will love the end result in spite of its flaws, and often Im one of those very people, but there are nagging issues here that I would very much like to see resolved if Nippon Ichi Software ever makes a direct follow-up or another title of a similar nature. Give it a try if youre looking for something different, but do remember to set your expectations accordingly.

If you enjoyed this The Guided Fate Paradox review, you're encouraged to discuss it with the author and with other members of the site's community. If you don't already have an HonestGamers account, you can sign up for one in a snap. Thank you for reading!

© 1998-2021 HonestGamers
None of the material contained within this site may be reproduced in any conceivable fashion without permission from the author(s) of said material. This site is not sponsored or endorsed by Nintendo, Sega, Sony, Microsoft, or any other such party. The Guided Fate Paradox is a registered trademark of its copyright holder. This site makes no claim to The Guided Fate Paradox, its characters, screenshots, artwork, music, or any intellectual property contained within. Opinions expressed on this site do not necessarily represent the opinion of site staff or sponsors. Staff and freelance reviews are typically written based on time spent with a retail review copy or review key for the game that is provided by its publisher.