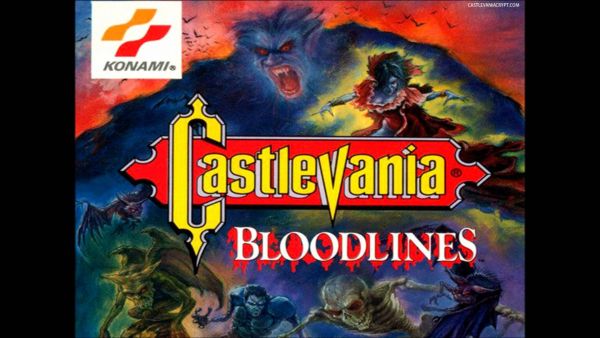 For years I thought I had experienced all of the worthwhile material that the Castlevania franchise had to offer. I battled Death atop a ship's mast, witnessed Alucard turn over a new leaf, aided Shanoa in restoring a cursed village, lifted Simon's curse, prevented Soma Cruz from losing his humanity, and destroyed Dracula with more Belmonts than I care to name. Yet it never occurred to me to give one nearly forgotten face-crusher of a Castlevania title a spin: Castlevania: Bloodlines on Sega Genesis. The implications alone--this being part of challenging franchise hosted on a venue known for tough games--should have told a masochist like myself not to hesitate. I only wish now that I had delved into this delightful addition to the brand sooner.

Bloodlines was the first Castlevania game that I had played that took you to numerous real world locations. You get to battle through a greenery in Germany, ascend the leaning Tower of Pisa, and negotiate crumbling columns in Greece. Each locale is tricked out with its own macabre environments and dreaded obstacles. You'll run afoul of massive skeletons swinging a bladed pendulum in the first stage, leap onto a series of tricky floating platforms with Pisa in the background later on, and splash across a blood-spouting fountain populated by classic red skeletons who refuse to die. 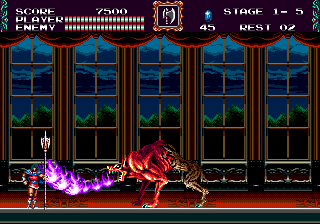 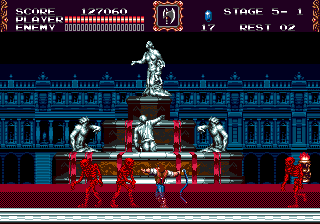 Each segment in the campaign is as challenging as it is memorable. They all require a bit of pattern memorization and astute reflexes in order to survive. Otherwise you might find yourself jumping headlong into enemies that seem to either materialize out of nowhere or surprise you with their peculiar behavior. The second stage, for instance, features a partially submerged set of platforms with a constantly rising/lowering water level. Mermen burst forth from the seemingly calm and reflective body of water at certain points, begging you to not only watch your step, but react before they can pelt you with fireballs. Get nailed by one of those suckers and your hero will meet a chilly end at the bottom of the lake.

I wish I could say that dying is no biggie in Bloodlines, and that there are password and an unlimited supply of continues to rely on, as there is in previous Castlevania titles. Although the game does feature passwords, continues are finite. If anything inspires you to replay whole stages in an effort to memorize perils and mitigate the loss of lives, it's this. Bloodlines is unforgiving; a cold-hearted SOB that doesn't care about your feelings and most certainly won't let up on you just because you're a softie. It's ruthless, and the only way to deal with it is to hone your skills and be ruthless yourself.

Given your situation, that shouldn't be too difficult. At your disposal is not one, but two vampire slayers: the whip-toting Belmont descendant John Morris (father of Portrait of Ruin's Jonathan Morris) and his spear-wielding sidekick Eric Lecard. With two different characters, you can experiment and discover which one better fits your playing style, which could give you an enormous edge when it comes to dealing with Dracula's army. I, for instance, was terrible with John. Something about his whip felt horribly inadequate, even clunky. In contrast, I tore it up with Eric and his spear. With its generous reach and the ability to attack diagonally, there was scarcely an opponent that could stand up to me. 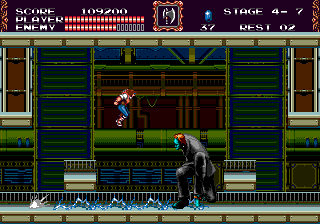 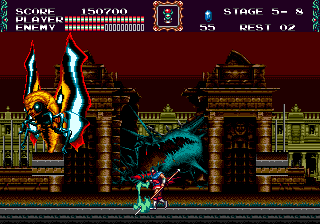 That also goes for the game's crazy collection of bosses. Although my one teensy complaint there is that Bloodlines features a few too many animate armor bosses, the rest make up a wondrously grisly rogues gallery. From the very moment I came face to face with the first mid-boss, a massive hellhound, I knew I was in for a horrific treat. One bay from this behemoth was enough to shatter the gigantic windows in the background and rain broken glass down on the battlefield. There's also a tough battle against a winged demon atop the Tower of Pisa. Each projectile and tail lash executed by this being has a possibility of sending you tumbling down from the structure. Perhaps the greatest fight of all isn't against Death--who sadly initiates you in a disappointing boss rush this time around--is against a vampiress who morphs into anthropomorphic moth, reminiscent of the obscure Peter Cushing flick "The Blood Beast Terror." This battle requires not only expert dodging in order to elude her poisonous mist, but daring and precise timing to deal with her seemingly erratic flight pattern. Wimping out on the chance to deliver a blow too often will only allow her more opportunities to poison-cloud the hell out of you.

My only complain with Bloodines is that it succumbs to cheapness towards the end of its campaign. There are a few situations, especially in Germany, that are impossible to surmount without foreknowledge or dumb luck. For instance, there's a foe that dangles from a tree and fires projectiles that dish out tons of damage. When approaching this creature, it will immediately lunge at you at an awkward angle, and continue to swing back and forth. In my first attempt at the stage, I fell for this dastardly trick and lost a life. There was no way of knowing that this would transpire, and I found it a bit disappointing that Konami would stoop to such a level of cheapness in place of the genuine challenge I typically associate with Castlevania games.

Despite that one little hiccup, Bloodlines is an excellent addition to the Castlevania franchise. I find it nearly criminal that the game hasn't been reissued in any form, not even on Nintendo's digital marketplaces. However, 3DS's marketplace currently has the atrocious Castlevania: The Adventure available for download. Apparently someone at Konami needs to get their priorities straight. The world needs less exposure to clunky, watered down platformers and increased access to the awesomeness that is Castlevania: Bloodlines.