You never forget an experience like watching a young genre mature. I had such an experience in 1996 when my brother introduced me to the first-person shooter Quake, and right then I caught a glimpse of the future of the genre. The game's opening demo depicted shadowy dungeons filled with 3D foes rather than choppily animated sprites. Nine Inch Nails blared from the speakers, replacing the cheesy MIDI-quality music I associated with games like Doom and Wolfenstein. I was also astounded at the apparent freedom of movement. The protagonist's weapon didn't remain stationary as he moved, but raised and aimed at targets.

However, I didn't truly lose it until I saw the game in action. My brother showed me the first few levels, where he took down chainsaw-wielding ogres with a rapid fire nailgun, blasted wicked knights with a shotgun, and lobbed grenades at zombies. The resultant explosions tore the shambling corpses to bits, sending crimson chunks of undead flesh flying in every direction.

Watching was itself entertaining, but actually playing and learning to blast my opponents to bits... that was divine! 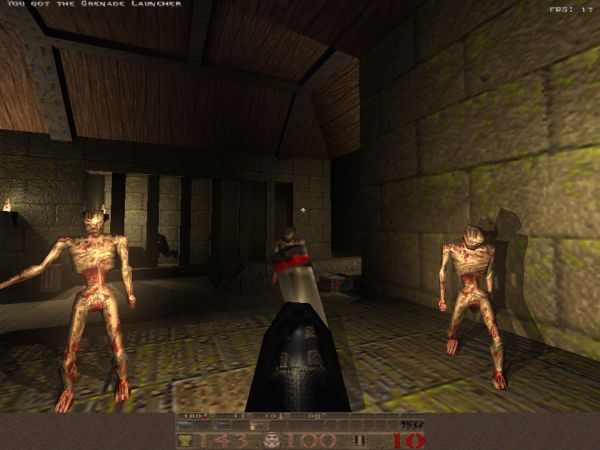 I was obsessed with Quake for a couple of years, and thought that the obsession would never end. Then again, I also believed that Quake was the pinnacle of the genre, and that future FPSs could only aspire to be on equal terms with the game. As you likely know, though, games age. Some do so well, while others do not. In some cases, even revolutionary or transitional games age poorly and aren't nearly as entertaining to play as they once were. Eventually, other titles come along that perform the same duties as their predecessors, only more efficiently. As I would eventually discover, such was the case with Quake....

When I feasted my eyes on Quake a few months ago, more than a decade after my previous session with it, I cringed. Time had not been kind to my old friend. Where before its visuals were jaw-dropping, it now looked horribly dated and grainy. Enemy character models were blocky and moved with a slight jitter, destroying the memory I bore of them rushing and pouncing with a terrifying deftness.

However, nothing in Quake had aged as poorly as its controls scheme. Where modern FPSs utilize the keyboard for movement and the mouse for aiming, Quake uses both for movement. Wrap your mind around that now: using the mouse to walk. That amounts to traversing the game's many corridors in a jerky motion, taking three-foot strides every other second. I'd honestly like to know who thought this would be a viable means of navigation in any first-person game. If you want to aim, you instead have to fiddle with the 'Page Up' and 'Page Down' keys. In other words, you have to stop what you're doing, leave yourself vulnerable, search your keyboard for a pair of keys you likely never use, and mess around with them until you've properly positioned your rocket launcher.

Were proper aiming an absolute necessity, I would have no choice but to destroy Quake and send Trent Reznor an angry email for contributing to such a travesty of a game. Thankfully it isn't. Quake uses an aiming system similar to Doom, which automatically corrects your shots if your reticle is perfectly below or above a target. So if there's an ogre on a lofty balcony you'd like to see come down in pieces, you need only aim directly below him and cut loose a rocket.

Despite the aiming correction system, I struggled through the first three stages of Quake. The game's mechanics felt so awkward and archaic that I could only foresee a negative review in the game's future. As I got into the fourth and fifth levels, something peculiar happened: my brain remembered how to Quake. Suddenly it was 1996 again, monsters were dying, I was kicking ass, and Nine Inch Nails' soundtrack was as spooky as ever. Finally Quake and I saw eye-to-eye again. 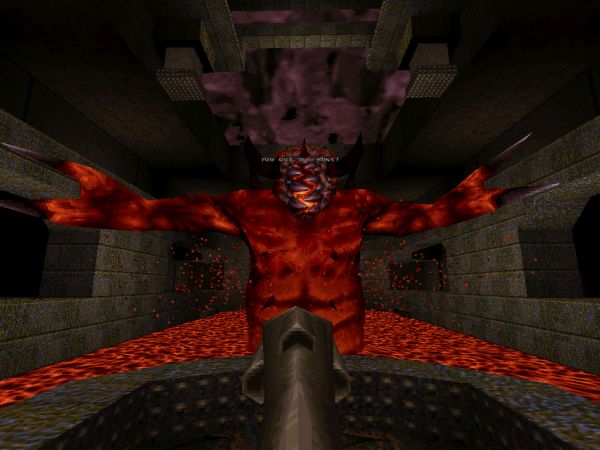 Grainy graphics and blocky monsters aside, the game was visually atmospheric and gloomy, highlighted by tenebrous strongholds and grim fortresses. Pouring out of these demonic citadels were ghastly abominations, decked out with bloodied claws and deviously misshapen features. I blasted bipedal predators and pumped nails into anthropomorphic spiders. However, none of them compared to a certain massive beast referred to as The Shambler. This monstrosity stood an easy twelve feet tall, clopped around on immense bovine hooves, and fired a devastating bolt of electricity powerful enough to reduce an unfortunate player to bite-size portions. Truly, I enjoyed battling the game's menagerie, if only to admire the imaginations that dreamt them up.

Of course, it also helped that Quake's battles can be pretty intense. The game had a habit of stacking the deck against me just enough to be fair, while at the same time schooling me if I wasn't careful. There were also plenty of moments when powerful creatures would pounce from out of pitch black corners and catch me unawares. In other instances, I'd charge into a room only to find my egress blocked. That's when a whole pack of snarling fiends would appear and attempt to rip me to shreds in closed quarters. Thanks to my ridiculously powerful weapons (and the ability to save and load at any time), though, they didn't stand much of a chance.

Felling beasts begot some fantastic advantages. Not only did I get to live a little while longer, but I earned the opportunity to explore the Lovecraftian realms Quake had to offer unabated. Each stage bore enough twisty, branching hallways and deadly chambers to hide some wonderful loot. I also found that game's level designs weren't limited to hiding secret chambers, either. There were plenty of special traps and challenges that required expert timing, patience, and analytical abilities. For instance, some stages featured hidden buttons that require you to scour the area and checking in places you wouldn't typically look. Another involved battling demons in closed quarters while on a moving platform. 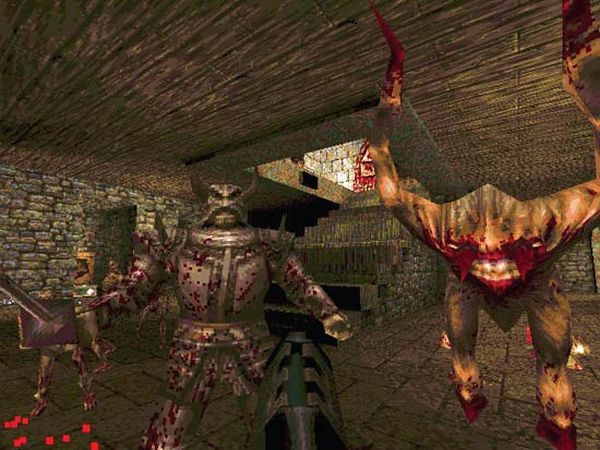 In a short amount of time, I found myself in love with Quake again. Maybe not as much as I did in my teenage years, but I still certainly enjoyed the game. In terms of cosmetics and controls, it hasn't aged well at all. In all other departments, though, the game still holds up fairly well. Regardless, I still think that iD should consider a possible "HD" re-release of this game, preferably with improved play control.
4/5

If you enjoyed this Quake review, you're encouraged to discuss it with the author and with other members of the site's community. If you don't already have an HonestGamers account, you can sign up for one in a snap. Thank you for reading!

© 1998-2021 HonestGamers
None of the material contained within this site may be reproduced in any conceivable fashion without permission from the author(s) of said material. This site is not sponsored or endorsed by Nintendo, Sega, Sony, Microsoft, or any other such party. Quake is a registered trademark of its copyright holder. This site makes no claim to Quake, its characters, screenshots, artwork, music, or any intellectual property contained within. Opinions expressed on this site do not necessarily represent the opinion of site staff or sponsors. Staff and freelance reviews are typically written based on time spent with a retail review copy or review key for the game that is provided by its publisher.