What comes to mind when someone mentions the 1975 film "Jaws" is a very simple, yet humbling, concept: despite mankind's apparent position in the food chain, it is possible for us to wind up another creature's lunch. For me, that sobering reality was always the most terrifying part of the movie. The antagonist wasn't a vampire, a werewolf, a zombie, or an alien, but an extant animal with an insatiable appetite for man-flesh. Thinking about that usually prompts me to conjure up a list of other life forms that could just as easily injure me or end my life. Eventually, that line of thinking culminates in me shuttering until the nightmarish possibility of being snacked on, envenomated, gored, mauled, or constricted dissipates, usually replaced by mental visions of frolicking puppies and kittens. It's then that I realize that the beasts of folklore have nothing on Mother Nature.

Do you know what doesn't come to mind when someone mentions "Jaws?" Incessant item farming.

Unfortunately, such is the notion that developer West One ran with when adapting "Jaws" into a video game. The game provides you with a boat and unlimited harpoons with which to defeat the human-hungry fish, but they aren't enough to get the job done. What you need is a bigger boat. The only way to obtain one is to sail aimlessly around the ocean and engage in random encounters, where you shoot jellyfish, stingrays, and various predatory sea life in an effort to collect conch shells. You can then take the shells to a nearby harbor and upgrade your rig (and especially your weaponry) so that you can more capably take out the massive great white.

'Cause, you know, marinas are known to provide goods and services in exchange for valueless bits of shellfish anatomy...

What this translates to is at least six minutes* of dull, uninteresting gaming. Don't get me wrong; I can stand item farming, if it's a small part of a game. Some RPGs, for instance, feature side quests that involve collecting certain items, sometimes ad nauseam. In most cases, though, the reward justifies the the time spent engaging in such a banal task. However, the operant term here is "side quest." Most of these tasks only make up the faintest fraction of an RPG's campaign. In Jaws, on the other hand, the entire campaign is nothing but tedious shooting and gathering.

Worse, the game fails to evoke the primal tension that the franchise was meant to conjure up. To some, that might not be a big issue. To a huge horror fan like myself, as well as someone who appreciates the "nature-run-amok" sub-genre that exploded thanks to the success of "Jaws," that's a careless misstep. True, NES games couldn't possibly be frightening; I'm not asking for that. However, when you consider titles like Sweet Home, it is possible to craft a tense 8-bit experience. Unfortunately, that would require a hefty amount of challenge, some survival elements, and a character for the player to root for. In other words, such a game would demand a deeper concept than an 8-bit Jaws video game could ever hope to feature.

I wouldn't say that Jaws was completely off, at least in respect to challenge factor. Mainly, devising strategies for amassing your collection of precious conch shells can be tricky because you lack a health bar. That's right, one single shot and you're dead and all of your upgrades are lost. If you think that avoiding death is a matter of treading (er... diving?) carefully, think again. I lost most of my lives trying to nab shells off of the ocean floor. I'd swoop down to grab one and a jellyfish would spawn right underneath me and terminate my existence. 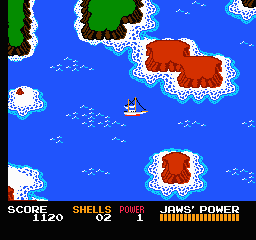 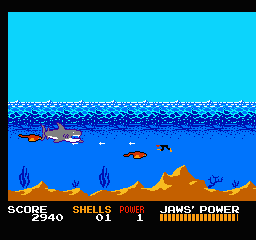 I can see where some might argue that Jaws is a good game for speed runners, especially in regards to trying to beat your record completion time. The only hangup there is that finishing the game is not purely a matter of skill. You're ultimately at the game's mercy, especially when waiting for shells to spawn or random encounters to occur. Achieving a super fast speed run is not a matter of being a badass player. Rather, it's more about being incredibly lucky.

Regardless of how I look at it, I'm unable to see almost anything positive in Jaws. Even for being a six minute game, it's a tedious, joyless experience. Personally, I can't recommend this title, no matter how many people insist that it's misunderstood. If you're still looking for a game that features both incessant collecting and a nightmarish antagonist, then I would suggest Slender: The Eight Pages instead of this tripe.

*It is possible to beat this game in six minutes or even less. All you need to do is secure upgrades in a timely manner (read: be very lucky) and voila!

If you enjoyed this Jaws review, you're encouraged to discuss it with the author and with other members of the site's community. If you don't already have an HonestGamers account, you can sign up for one in a snap. Thank you for reading!

© 1998-2022 HonestGamers
None of the material contained within this site may be reproduced in any conceivable fashion without permission from the author(s) of said material. This site is not sponsored or endorsed by Nintendo, Sega, Sony, Microsoft, or any other such party. Jaws is a registered trademark of its copyright holder. This site makes no claim to Jaws, its characters, screenshots, artwork, music, or any intellectual property contained within. Opinions expressed on this site do not necessarily represent the opinion of site staff or sponsors. Staff and freelance reviews are typically written based on time spent with a retail review copy or review key for the game that is provided by its publisher.