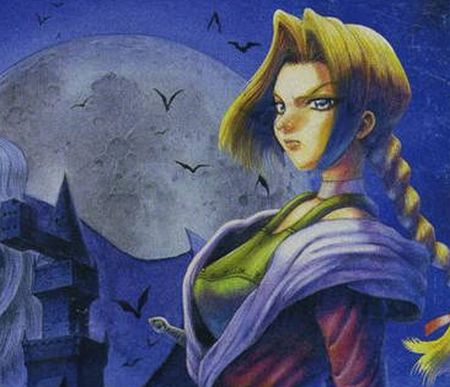 I had originally aimed to begin this review like I do most Castlevania reviews. I wanted to give my ridiculous interpretation of Castlevania Legends's simple premise, starting with the appearance of a vampire's castle and ending with Sonia Belmont grabbing her trusty whip and kicking some tail. However, regardless of the sequence of words I composed, I couldn't produce an introduction that didn't feel like stilted, misleading nonsense. Basically, I felt like I was about to talk up a game that I am apathetic towards.

Yeah, that's right; I, a huge Castlevania fan, am completely devoid of emotion towards Castlevania Legends. Even The Adventure, as godawful as it was, drew some sort of a reaction out of me (albeit a negative one). My only responses to Legends consisted of yawns and a few eye rolls.

When a platformer leaves me unimpressed, it's usually because it it sticks too closely to formula. Unfortunately, the opposite rings true for Legends. The development team involved with this piece decided to experiment with various concepts. While I'm cool with experimentation, the developers seemed to toy rather ham-fistedly with the franchise's core concepts. For starters, they dropped the axe on sub-weapons (no pun intended) and replaced them with spells called "Soul Weapons." Unlike the franchise's sub-weapon, Soul Weapons have more generalized effects, and therefore don't require consideration for factors like timing or positioning. For instance, there's a "fire spell" that damages all foes present on the screen. Skill isn't necessary; you just cast the spell and it automatically damages everything, all at the hefty cost of five hearts.

I will admit that some of the spells have neat effects. There's an ice spell, for example, that fully heals you for a whopping twenty hearts. Unfortunately, the meager number of nifty Soul Weapons is not a suitable replacement for the good old sub-weapons. Where the sub-weapons aided in making the Castlevania experience a little more engaging, the Soul Weapons are dull and somewhat lazy.

Sonia also has another experimental trick up her sleeve: Burning Mode. Initiating this secret ability (which can only be executed once per life) grants temporary invincibility and increased damage and speed. Once you activate it, you cannot shut it off until your Burning meter is empty. While that might sound awesome, Burning Mode basically breaks most boss battles. All you need to do is ensure that your Burning meter is intact when you meet a boss, then activate it and go to town. You can launch an all-out assault on your opponent without regard for injury, all while dishing out extra damage at a faster rate. In other words, Burning Mode removes all challenge and engagement from boss battles. Most of the bosses I faced in my playthrough didn't survive Burning Mode, and those that did lasted only a few additional hits before keeling over.

If the stage designs in Legends succeed in any department, it's that they're quite challenging. Each level features the kind of segments you would expect from a Castlevania game, such as collections of ledges that are tricky to negotiate, dilapidated bridges, and ruthless towers with rotating gears and ascending/descending platforms. Spread throughout the campaign are a gracious array of horror-themed monstrosities, from savage skeletons to leather-winged bats. One scene I enjoyed involved a series of platforms positioned above bottomless pits. Patrolling each platform was an armored foe that would occasionally break into a sprint. Each goon took several shots to fell, and usually required me to join it on the platform, take a few choice shots, and retreat before it had a chance to knock me into the pit.

Unfortunately, such enjoyable segments are few and far between. Most stages showcase questionable design choices, the most obvious being annoying detours. Hither and yon are forks in the road with alternate pathways to explore. Usually, one path leads to a boss and the other leads to a "collection" item or a restorative piece of meat. Once you've reached the end of a side branch, though, you have to tediously backtrack through the previous area or two. Sadly, there's no indication as to where a path will lead you. You have to guess and hope you're not wasting your time.

However, such design quirks aren't enough to fully damage the game, at least not in my book. If anything demeans the experience of playing Legends, it's the game's cheapness. For starters, some enemies are unavoidable. The third stage, for instance, features shadow creatures that descend diagonally towards you, and cannot be killed without taking damage. Another segment features off-screen spearmen who fall onto you. You'll even plummet a few steps downward after they nail you, causing them to respawn as you ascend the stage, thereby beginning the vicious cycle anew. A worse scenario appears in the final stage, just before you fight a minotaur mid-boss. There's a whip power-up you can secure, but it requires you to jump into stalactites and take damage in order to obtain it. The mid-boss is needlessly tough without it, even while in Burning Mode.

I could be wrong, but I think the developers had hoped you would use Burning Mode in all of these cases. It's possible that they included these traps as a means to deplete your Burning meter, thereby forcing you to fight any upcoming bosses without Burning Mode. Little did they suspect that anyone with half a brain would just take the meager damage and save the Burning ability for later. More than anything, this comes off as a lazy attempt to toughen up boss battles while still providing a game-breaking advantage.

When I said that Castlevania Legends draws no emotion out of me, I lied. I'm actually saddened by this title, especially since it's the only Castlevania starring Sonia Belmont. Long after the game's release, Konami separated it from the canon and replaced with its events with those that transpired in Castlevania: Lament of Innocence, effectively erasing Sonia from the main timeline. Most of all, though, I'm saddened that this Castlevania's Game Boy sendoff. Even if it the platform hasn't aged particularly well as a whole, and the franchise didn't enjoy a great amount of success on Game Boy, the Castlevania brand deserves a fonder farewell than Legends.

If you enjoyed this Castlevania Legends review, you're encouraged to discuss it with the author and with other members of the site's community. If you don't already have an HonestGamers account, you can sign up for one in a snap. Thank you for reading!

© 1998-2021 HonestGamers
None of the material contained within this site may be reproduced in any conceivable fashion without permission from the author(s) of said material. This site is not sponsored or endorsed by Nintendo, Sega, Sony, Microsoft, or any other such party. Castlevania Legends is a registered trademark of its copyright holder. This site makes no claim to Castlevania Legends, its characters, screenshots, artwork, music, or any intellectual property contained within. Opinions expressed on this site do not necessarily represent the opinion of site staff or sponsors. Staff and freelance reviews are typically written based on time spent with a retail review copy or review key for the game that is provided by its publisher.