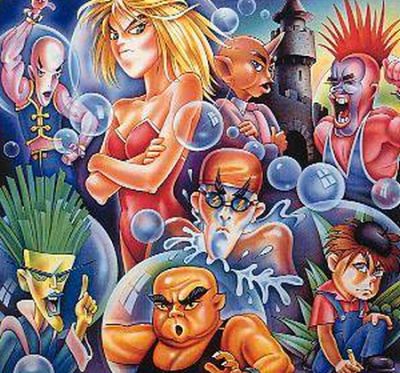 Mendel Palace's premise sounds as though it were devised on the spot, presented to an exec by a frazzled designer. I don't know how else someone could have contrived a concept that involves battling homicidal dolls by shuffling floor tiles

In Mendel Palace, shuffling those tiles causes them to slide backwards and potentially collide with a wall, shattering adorable doll frames in the process. Of course, catharsis isnt your only reason for destroying these dolls. Our hero, who is strangely named Bon-Bon, has embarked on yet another man-versus-army rescue mission. As it turns out, his girlfriend Candy has fallen into coma-like sleep. Concurrently (or possibly as a result), her peculiar collection of dolls has come to life. Their agenda is not clear, but they've imprisoned Candy within the Mendel Palace and intend not to awaken her.

The quirky foray kicks off with a stage select screen, reminiscent of Mega Man. Each unique doll type dwells within a different house, with ten stages per abode. Each stage represents a room with tiled floors (five wide by seven long). Tiles come in a variety of forms, which range from a standard panel to an impeding block. Other tiles contain power-ups, like stars that reward you with an extra life after you've nabbed one hundred of them or suns that automatically shuffle all tiles on the screen. If you don't like a tile, or wish to discover a more advantageous one, you can always shuffle it until you uncover one to your liking. Take caution, though, because some stages utilize more insidious tiles. For instance, there are certain panels that spawn new enemies when exposed. 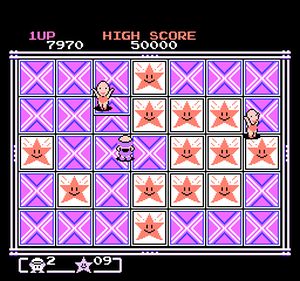 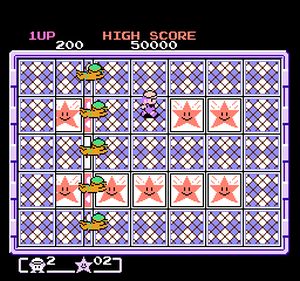 Now ponder on this glorious instance of NES logic for a moment... These dolls are so frail that a light bump against a wall destroys them irreparably, and they happen to inhabit houses fashioned with tiled floors that they can easily trip on. That might sound like a dig against this game, but in truth it's part of what I appreciate about it. Like many games from its era, it gleefully laughs in the face of logic.

Although, wouldn't it be priceless to see the look on Bon-Bon's face as he enters a house outfitted with hardwood floors or wall-to-wall shag carpeting?

If oddball premises were all I needed, then I would stop right here, award Mendel Palace high marks, and be on my merry way. However, I expect more from the game than surrealism or illogical concepts.

There are a handful of issues with Mendel Palace, but none of them break the game. For starters, you're unable to walk diagonally. This might not seem like a flaw at first, mainly because many of the levels are easy to clear out. Later stages graciously turn up the difficulty rating, likely as a measure to keep the game from devolving into mindlessness or repetition. It's during these phases of the doll-slaying process that you'll encounter faster, more aggressive goons in greater numbers. They'll often converge on you from all directions, leaving openings only in the most awkward of angles. Since you can only walk in four directions, you'll either have to make a ridiculous number of ninety-degree turns or accept your fate and that pray it's painless.

On top of that, Bon-Bon doesn't move very quickly. While this doesn't deprive the game of proper pacing, it does become aggravating when you're being chased by a gang of plastic monstrosities. You could shuffle them in an effort to stymie them, but you're unable to shuffle and move simultaneously. Bon-Bon briefly pauses while shuffling, leaving you wide open.

I will say this: for a game with adorable presentation and cute concepts, it has a tendency to be ruthless. In some stages, you'll shuffle all of your opponents away with a sun tile. Before you can arrogantly dust off your hands, you'll notice that the sun has revealed dozens of doll generators, and that the foes materializing from those portals are super pissed because the stage's hidden time limit has expired. In other stages, you'll start off in an area enclosed by block tiles and surrounded by Chucky-like miscreants. In either case, it's likely you'll die at least once. Heck, if you play like me, you'll die so often that you and the 'Game Over' screen will refer each other by first name.

I may be making this game out to be a face-breaker, but it's actually fairly balanced. For every difficult stage, there are about two or three easy-to-moderate ones that you can fly through. Personally, I appreciate the variance in difficulty from one stage to the next. That way, you never feel like you're totally drowning, but you also don't get the notion that the game is completely holding back.

It also helps that Mendel Palace is quite forgiving. For example, death doesn't cause dolls to respawn. Rather, you'll restart the stage with only the surviving dolls to contend with. Although that sounds like a paltry advantage, it actually provides you with a huge opportunity. Mainly, it signifies that the dolls' strength in numbers should have diminished enough that they won't be as able to mosh you to death. Also, the game offers unlimited continues, so you'll have as many chances as you desire to vindicate yourself. Unfortunately, though, there are no passwords or saves. You'll have to blaze through every stage in one sitting, which can be quite the task when you consider that there are one hundred levels total. 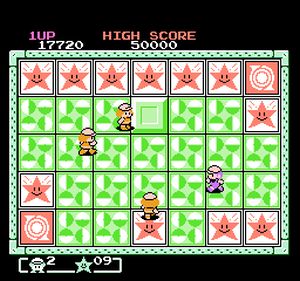 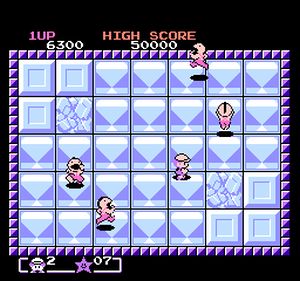 If anything makes Mendel Palace worthwhile, it's the dolls themselves. The developers at both KID and Game Freak likely knew that shuffling tiles would grow tedious before too long. Obviously, the best way to alleviate imminent tedium would be to give the campaign some variety, and the developers achieved this through their wonderful array of enemy types. For instance, there are dancer dolls who aimlessly pirouette across the room. Dealing with them is a simple matter of being aware of your surroundings, while waiting for an opportunity to kill one to arise. As you can imagine, caution is the key to winning there. In contrast, there are adversaries who draw crude doll replicas on tiles. These clones then come to life and wander about the screen. The only way to prevent this from transpiring is to shuffle the tile before the doodle is complete. That sometimes requires you to charge past a cluster of approaching nemeses, sometimes to prevent multiple dolls from drawing. In such cases, it would be more to your advantage to take risks rather than tread carefully.

Ultimately, the variety of enemy types is Mendel Palace's strongest feature, as it helps to keep the experience fresh and lightly entertaining. Unfortunately, the previously listed issues prevent the game from attaining excellence. More than anything, Mendel Palace is an enjoyable palate cleanser. It's the kind of weird game you play between titles just to get the taste of certain genre tropes out of your mouth, usually before moving onto a more serious project. I can appreciate that in a game, but sadly also means that Mendel Palace is more of a stepping stone than a fully appreciable experience.

If you enjoyed this Mendel Palace review, you're encouraged to discuss it with the author and with other members of the site's community. If you don't already have an HonestGamers account, you can sign up for one in a snap. Thank you for reading!

© 1998-2022 HonestGamers
None of the material contained within this site may be reproduced in any conceivable fashion without permission from the author(s) of said material. This site is not sponsored or endorsed by Nintendo, Sega, Sony, Microsoft, or any other such party. Mendel Palace is a registered trademark of its copyright holder. This site makes no claim to Mendel Palace, its characters, screenshots, artwork, music, or any intellectual property contained within. Opinions expressed on this site do not necessarily represent the opinion of site staff or sponsors. Staff and freelance reviews are typically written based on time spent with a retail review copy or review key for the game that is provided by its publisher.