Willow is a pleasant surprise compared to many movie-licensed video games in that it's for the most part competently crafted and actually includes a couple of innovative touches that I find myself wishing more Zelda-like action-RPGs would implement. Unfortunately, since its based on a movie license that it doesnt entirely capitalize upon, the game also comes off as lazy and uninspired at points. That leads to what is best described as a mediocre experience with a few redeeming qualities.

Loosely based on the 80s fantasy movie about a really small person and a few mismatched allies who embark on a quest to destroy an evil witch and her big, skull-mask-wearing enforcer before those villains can kill an infant princess who is destined to end the witch's reign of terror (or something like that; it's been an eternity since I watched the film), Willow puts most of its effort into trying to recapture the familiar Zelda magic while adding some light role-playing elements. You gain experience from killing monsters, and gaining levels increases your health and magic capacity. In a neat twist, your level also determines how well you can swing whatever sword you're currently wielding. As you progress through the game, you keep getting newer, more powerful weapons. If you're too low a level to properly wield one of your exciting new acquisitions, you'll only be able to swing it slowly. Gain a level or two, though, and that weapon will be flying at about three times the former pace, making it a lot easier to clear out foes without taking damage. 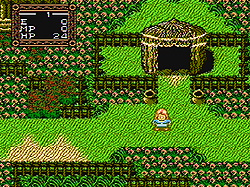 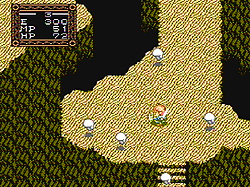 That's a pretty neat addition to the typical combat I see in games like this. At times, I found myself forced to decide whether I'd be more effective with my most powerful weapon, or if I could make better use of a weaker sword that I could swing more quickly. Unfortunately, the mechanic is a bit under-utilized in Willow. There were only two cases where Id obtain a sword and find myself unable to swing it at maximum speed right away. The first of those times came at the beginning of the game, when you're expected to grind out five or six quick levels just to survive the first dungeon. The other instance came towards the end of the game, when to my amusement, the situation resolved itself as a previously useless weapon was upgraded to a more powerful form that not only was the strongest sword in the game, but also maintained the swinging speed of its weaker variation (rendering the heavier sword I had been struggling with completely obsolete).

Alert readers may have noticed the use of the word "grind" in the previous paragraph. That sheds light on Willow's biggest flaw: the requirement that you spend a lot of time grinding in order to see the adventure through to its conclusion. Capcom apparently felt that it'd be better to artificially inflate the length of the campaign by forcing players to repeatedly kill the same screen of floating skulls over and over and over again, rather than to release a short adventure game, even if doing so stripped away a good deal of the fun in the process.

The problem is that, since you only can advance to level 15 and you'll probably be about 40 percent of the way there after an hour or so of play, it takes a TON of experience to reach those last few levels. As you can imagine, it takes almost forever to rack up 10,000 or so experience points when it's hard to find regular foes that yield much more than 100 upon their demise. You literally have to reach level 13 in order to beat the game, and you'll probably want to get at least to the 14th level in order to give yourself a margin for error when battling against Bavmorda's first form, since you have to use a specific spell and at level 13, you'd have to expend all your magic without missing a single shot in order to win. Even when I was younger and used to this sort of thing in virtually any game where you gain levels, I found advancing those last couple levels to be a tiresome exercise. Now, in the midst of an era when mandatory level-grinding is more a rarity than something players actually have reason to anticipate, it becomes the sort of agonizing experience where minutes stretch on like hours.

The other big flaw in Willow is its lack of puzzles, or any mentally-stimulating activity at all. The dungeons located throughout the game's world are nothing more than huge masses of rooms and corridors arranged to make a maze where all you have to do is find the treasure chests full of equipment and spells before making your way to the boss or exit. In fact, everything is like this. When you get to a town, count on walking through about 20 screens to find the five or so homes that you can actually enter to find information, items or a place to rest. Midway through the game, when you have to scale a pair of towers, enjoy seeing the same few screens as you ascend each one's multiple, identical floors. Meanwhile, there aren't really any puzzles to take your mind off the monotony of aimless wandering.

The closest thing to a respite from the monotony are a few occasions where you might want access to Nintendo Power or the Internet, because you'll be expected to backtrack to some random location to get necessary things. At one point, you need to get an item from a little squirrel dude to breathe underwater, so you must backtrack through the area you just explored until you find him lounging around on one of the screens, but that's less of a puzzle than one of those typical 8-bit game situations where you have to decipher vague (and sometimes misleading) directions to figure out a solution. You're told squirrel-dude has the item you need, so you simply wander around all the areas you have explored until you find him. Depending on your luck, this could take mere moments or much, much longer just as figuring out that the only way to get rid of the guard in front of the final castle is to use a particular spell that, up to that point, was only needed for one completely different activity.

I should also spare a moment to complain about a few minor issues, like how annoying certain undead enemies are. First, you need a specific sword (which swings slowly until you've reached a very high level) to fight them. More importantly, it's often more trouble than it's worth to even bother doing so. Sure, those foes tend to drop magic-restoring items, which are nice. But when you're dealing with ghosts who will split into multiple copies, stealing your magic as they do so, or zombies who turn you into a pig (causing you to have to dodge their attacks for however long it takes for the spell to wear off), it's best to avoid these confrontations altogether if you have a choice in the matter. 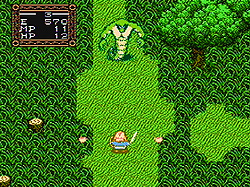 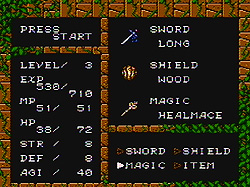 Despite all of my complaints, Willow was reasonably fun -- just not the sort of game that I'd want to go through repeatedly. The graphics are nice and some of the larger monsters, such as the snake-men and two-headed giants, are quite detailed. There's a neat sort of randomness to the fighting, as on many screens, enemies may or may not appear. You might walk through a dozen screens without more than one or two fights and then, when you backtrack, find enemies popping up on nearly every screen. The thing is, this is the sort of NES game that just didn't age as well as some of its contemporaries. There's too much mindless busywork involved with grinding for levels and, at times, it just seems bloated with too many empty screens that serve no real purpose other than making sure it will be a LONG walk to get from one place to another. Back in high school, I remember enjoying much of this game; nowadays, I found it to be more of an experience that is simply endured...

If you enjoyed this Willow review, you're encouraged to discuss it with the author and with other members of the site's community. If you don't already have an HonestGamers account, you can sign up for one in a snap. Thank you for reading!

© 1998-2021 HonestGamers
None of the material contained within this site may be reproduced in any conceivable fashion without permission from the author(s) of said material. This site is not sponsored or endorsed by Nintendo, Sega, Sony, Microsoft, or any other such party. Willow is a registered trademark of its copyright holder. This site makes no claim to Willow, its characters, screenshots, artwork, music, or any intellectual property contained within. Opinions expressed on this site do not necessarily represent the opinion of site staff or sponsors. Staff and freelance reviews are typically written based on time spent with a retail review copy or review key for the game that is provided by its publisher.