WOW! YOU LOSE! the game over screen subtly informs you after youve just lost a battle in Bokosuka Wars for no apparent reason. The words are accompanied by imagery of the hero, a powder-blue and white blob, being chased across the screen by a darker blue blob sporting a snazzy crown and cape for some reason. I can only assume hes the bad guy. This is the highlight of this NES RPG from 1985. Not only is that screen the most graphically detailed one that youll see over the course of your time with the game, but its also the one that will most likely inspire you to turn off the console and throw the game cartridge under a bus. Everybody loses when they play Bokosuka Wars. 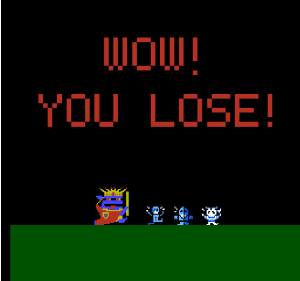 It also happens that WOW! YOU LOSE! is the only text youll ever encounter once you advance beyond the title screen. Yes, this means that there isnt an actual plot. You guide your powder-blue blob across a black screen that occasionally sprouts a tree (apparently you are in some kind of wood, perhaps battling against the evils of deforestation). You move through a couple of these minimalist screens until you stumble across a large red box in which some people (perhaps fellow hippies) are trapped. It seems that by killing the enemy blobs that have overrun this sparse forest, you can find and rescue your incarcerated chums. But, as you can probably tell, the matters of who they are, why theyre trapped, and whether or not you can ever actually succeed in your mission is left entirely to your imagination. Youre never even given a definition of a Bokosuka War.

This flagrant lack of exposition might be forgivable if the game was even remotely fun to play, but the problems begin with the very first button press. The directional buttons are used to guide your blob, and these controls are unforgivably sluggish. The hero ponders for a good second before following your navigational instruction and thats really the only useful input you have. 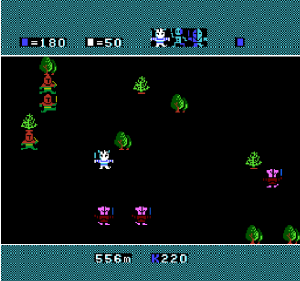 Random encounters have gradually been phased out of RPGs in recent years and Bokosuka Wars will remind you why that is the case as it takes the meaning of random a little bit too literally. A battle is triggered by simply running into an enemy blob, at which point a crossed swords icon flashes on the screen. The outcome of the skirmish is then determined by the game, and visual indications leave you to believe that is done so completely at random. There is no actual battle system on offer, just the flip of a statistical coin  a coin that, quite honestly, feels weighted against you. Youll lose more often than you win, and for no obvious reason. With no save system to record your progress, this setup is uniquely infuriating. Your best bet, if for some masochistic reason you still want to progress, is to simply avoid enemy blobs at all costs. It hardly matters, anyway; theres no experience system and no new gear to acquire, even when you win.

The music also seems designed to drive you away at all costs. Three PCM tunes are on offer, lasting around five seconds each and looping endlessly. There is no sense of melody; a cat walking across a piano would be more tuneful. The empty screens would be better accompanied by silence.

When it comes to retro reviews, there must always be an allowance made for certain games that are a product of their era. This is particularly true of RPGs. The NES era of role-playing was notoriously esoteric in difficulty, obscurity, and outright sadism. What has gained this period such a cult following is that, for all their idiosyncrasies, the classics of the day offered memorable settings, rewarding challenges, and unforgettable music. It was also worth braving the confusion those titles offered when you finally could count on the satisfaction that came from figuring the games out for yourself.

Bokosuka Wars is an oddity even amongst its peers. The simplistic graphics are unconscionably ugly, the sound is excruciating, and the random difficulty is simply laughable. Even the most diehard retro RPG fan should only play this, at best, as a curiosity.
1/5

If you enjoyed this Bokosuka Wars review, you're encouraged to discuss it with the author and with other members of the site's community. If you don't already have an HonestGamers account, you can sign up for one in a snap. Thank you for reading!

© 1998-2021 HonestGamers
None of the material contained within this site may be reproduced in any conceivable fashion without permission from the author(s) of said material. This site is not sponsored or endorsed by Nintendo, Sega, Sony, Microsoft, or any other such party. Bokosuka Wars is a registered trademark of its copyright holder. This site makes no claim to Bokosuka Wars, its characters, screenshots, artwork, music, or any intellectual property contained within. Opinions expressed on this site do not necessarily represent the opinion of site staff or sponsors. Staff and freelance reviews are typically written based on time spent with a retail review copy or review key for the game that is provided by its publisher.