Emulation has changed the way we experience old titles. Some would say for the better, and Im not sure theyre wrong. Save states, in particular, have the ability to solve one of early gamings biggest problems: having to beat a game in one sitting. Im not a huge proponent of using save states to muck around in a boss fight or to reload every time I die (my introduction to save states was a friend in college who used them in FF Tactics to make sure every one of his attacks hit, and it struck me as incredibly cheap). But using them to set reasonable checkpoints sometimes takes games which were exhausting to play and brings out their best qualities.

Enter Little Nemo: Dream Master, a game that tortured me in my youth by being annoying enough to frustrate the hell out of me, but also fun enough that I continued to come back to it. The concept had a lot to do with this. Nemo takes a platforming foundation and then puts the emphasis on exploration rather than on linear completion. It isnt about running from right to left until you get to the end of a stage, instead its about climbing into the sky, burrowing underground, sneaking through hidden passages, and generally scouring the level for the keys youll need to unlock the exit. To do this, you have to enlist the aid of several animals hidden around a stage. By feeding them candy, Nemo can, um, merge with them to become an animal-human hybrid. Sometimes it makes a surreal kind of sense, like Nemo riding on the back of a giant ape and directing it to punch enemies out of the sky or climb trees. Other times, not so much; like when Nemo straight up steals a bees skin, wearing it to give him the power of flight and aerial attacks. Doesnt matter, though, everyone knows the bee is friggin awesome.

Finding the keys always requires finding new animals first, and switching to them to use their powers, then switching back to Nemo at the right time, turning stages into dilemmas started whenever you spot a key. Yeah, you can see that key, its right there just out of your reach, how are you going to get it? Solving that puzzle is the fun of Little Nemo. Its a concept that would much later be repeated in games that received infinitely more attention, like Super Mario 64. It might not have 3D graphics, but Little Nemo still thinks about level design three-dimensionally. 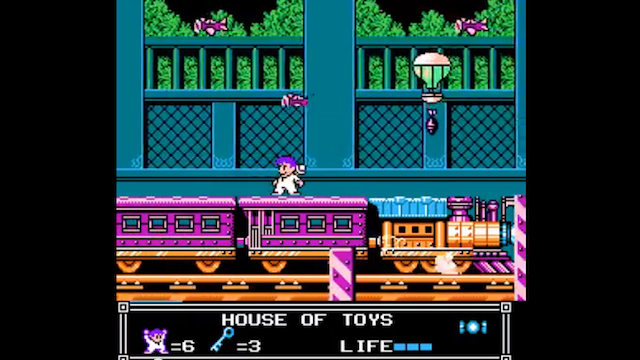 All the evidence you need to know its working is to note how off-key the levels which dont follow this design feel. For instance, I guarantee you that most players have rage quit on the third level. Here, you have to ride a toy train through a bombardment of planes, hot air balloons, spikes, and--oddly enough--flying squirrels. Theres no exploration in this stage, its just dodging--and dying when you fail to dodge. Nemo falls apart in every way when it tries to be an action title. The controls dont support it, Nemos subpar jumping and fighting abilities dont support it, hell, even the aesthetic doesnt support it. Nemo is a kid with blue hair in one-piece pajamas who throws candy to stun enemies while cheery music plays in the background. Its not an image that gets you pumped up for action.

Level four recovers nicely from this. Its a great underwater stage where you have to turn into a hermit crab to dig for buried keys and into a fish to outswim the most evil-looking tadpoles Ive ever seen, but then those terrible checkpoints I mentioned at the beginning of the review start to come in. Level five takes place in Nemos house. An otherwise inventive level, the problem is that any time you die, you start back at the same spot at the very beginning. At first glance, this wouldnt seem so bad. The beginning is more or less in the lower left-hand corner of the house, with keys hidden above you in the attic, scattered to the right past some stairs, and even below you in the basement. Seems like a good area to branch out and do some exploring. The problem is that the keys above you require the bee to reach. The bee is in the basement, but to get there you have to get the lizard, which is up the stairs. But Nemo cant climb the stairs without the help of the frog, which requires a little side trip to pick up. The first time you go through this hierarchy of animals, its entertaining because youre picking up keys along the way. But lets say you get the bee and then die on your way to the attic. A fair game would send you back maybe to where you got the lizard or, at worst, the frog. But because theres only one checkpoint in the house, you have to start all the way back at the start and pass the same trials and areas over and over again until you can basically do a flawless run of the house.

This sudden emphasis on doing things the right way and doing them the right way in one run damages the non-linearity the game establishes up to this point. Exploration is about trying things and taking risks. When you know that taking a risk could send you back to the very beginning of a level, you stop taking them. And when you know that theres a specific order you have to do things, in order to beat a stage, you stop feeling like youre exploring. A zig-zag is still a line, no matter many how many times it doubles back on itself. 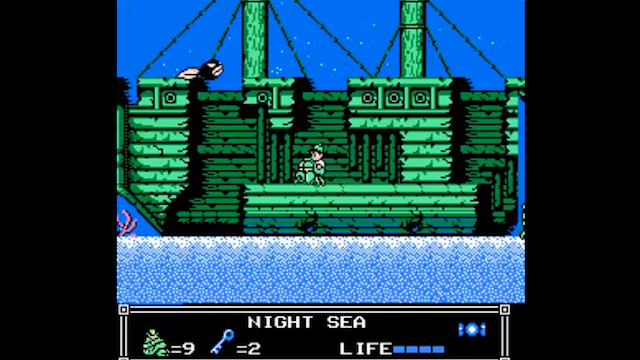 Things continue to deteriorate as you get further along, culminating in the Nightmare Realm, which is really three very long levels broken up by the games only boss fights. Here, Capcom incorporates the terrible idea of sending you all the way back to the first Nightmare level when you get a game over. I call it terrible because nowhere else in the game is there a set of levels slapped together like this, without checkpoints you can continue from. Its an unwelcome endurance run, even more so back when I was a child and fatigued at this point. Turning off my NES and giving up meant starting all the way back on the Mushroom Forest the next time I played yet more often than not, thats exactly what I did.

The end result of all of this is that I know three levels of Little Nemo as well as any of my childhood playgrounds. I explored every inch of the Mushroom Forest and climbed to the greatest heights of the Flower Gardens. I can describe in detail the sunken ship and coral reefs of the Night Sea. And thats where Little Nemo ends for me. I have beaten the game, numerous times, but never without the help of game genie. Its not the hardest game in the NES catalog, not by far. I couldve taken the time to sat down and beaten it legitimately. But the charm that wouldve made me want to spend that much time with the game ends in level four. After climbing out of the Night Sea, its an action game that doesnt control as well as Contra or Battle of Olympus.

Presumably youre not reading this review because youre getting ready to open a new copy of Little Nemo to play on your brand new NES. I have to figure instead that you have an emulator and may have been wondering whether theres anything good about a game featuring a little boy in his pajamas. The answer is a definite yes. Little Nemo can be thought of as an early Banjo Kazooie in many ways that are positive and most of its faults disappear with use of save states. Its just a shame that we didnt have them during my childhood, to smooth out some of gamings rougher edges.

If you enjoyed this Little Nemo: The Dream Master review, you're encouraged to discuss it with the author and with other members of the site's community. If you don't already have an HonestGamers account, you can sign up for one in a snap. Thank you for reading!

© 1998-2021 HonestGamers
None of the material contained within this site may be reproduced in any conceivable fashion without permission from the author(s) of said material. This site is not sponsored or endorsed by Nintendo, Sega, Sony, Microsoft, or any other such party. Little Nemo: The Dream Master is a registered trademark of its copyright holder. This site makes no claim to Little Nemo: The Dream Master, its characters, screenshots, artwork, music, or any intellectual property contained within. Opinions expressed on this site do not necessarily represent the opinion of site staff or sponsors. Staff and freelance reviews are typically written based on time spent with a retail review copy or review key for the game that is provided by its publisher.