One day, I happened to glance at the preview screen while visiting Software Etc. The video I spied there--a glimpse of the new Castlevania game headed to PlayStation, entitled Castlevania: Symphony of the Night--lifted my spirits and nearly initiated a seizure-like nerdgasm. Detailed in the action-packed preview was a heated rumble between Alucard, the game's protagonist, and a duo of anthropomorphic beasts. Though I was ecstatic to discover that one of my favorite franchises would finally appear on Sony's console, something seemed amiss. For starters, I noticed that the game displayed the amount of damage dealt whenever a character landed a blow. At the same time, I spotted what appeared to be HP and MP denoted in the upper left corner of the screen. The two observations collided in my mind, forming three dreaded letters that hearkened back to one of Castlevania's darkest outings: RPG. What transpired after this revelation remains fuzzy in my memories. All I recall is feeling melancholy, but witnesses insist that I ran from the store, fell to my knees in the middle of the mall food court, and screamed, "They killed it! Konami killed it!"

Zoom ahead several months to December 28, 1997, some time after I had decided to curb my fanboyish angst and give the game a fair shot. It was on this day that I watched Symphony's end credits roll, my jaw slack with amazement. The only words I uttered were, "Oh man, Konami killed it." 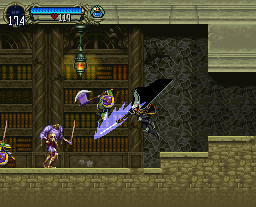 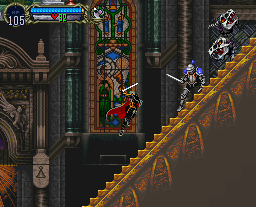 Despite my previous apprehension, I grew to love Symphony's shift in franchise conventions. For instance, I didn't miss having a whip as a main weapon (although subweapons were still present), nor did I mind the lack of a level-by-level structure. Actually, I found the Metroid-style scouring of Castle Dracula and its convoluted network of dusty corridors, spacious rooms, devious towers, and forbidding subterranean tunnels to be a pleasant break from the old configuration. Best of all, the new design heavily encouraged exploration, and I'm a huge sucker for that.

I loved exploring the vast castle, partly because of the gorgeous and grim 2D visuals that accompanied each area. My first awe-inspiring moment involved traipsing the zombie-littered main hall, complete with hefty crimson draperies and massive windows. More details could be seen beyond the panes in the form of a verdant courtyard set against a morose purple sky. Though these seemed like trivial bits, they added to the game's wonderful brooding atmosphere. Of course, it wasn't just one area that set the mood. Further adventures into the maddened palace sent me through an alchemy lab lined with crumbling columns, into a glorious cathedral decked out with angelic reliefs and beautiful stained-glass windows, past an impressive courtyard featuring a bloody fountain, and even into the depths of a cheerless abyss that led to a ghastly necropolis. With every new location I discovered, I grew more fond of the game's haunted hallways and learned to appreciate the new structure.

It was a joyous event entering a new section of the castle. For that meant access to uncharted nooks and crannies brimming with beasties, and provided the potential for snagging new items and equipment. Although the prospect of filling my inventory with wondrous miscellany was thrilling, it didn't always pan out as I had hoped. Most of the time, I'd slice through a lengthy hallway of monstrous goons just to secure a basic food item like a peanut or a mushroom. Sometimes, though, I'd carve through squadrons of undead soldiers and locate a new piece of equipment like a powerful sword with a special attack or a rare chestplate that absorbs elemental damage. 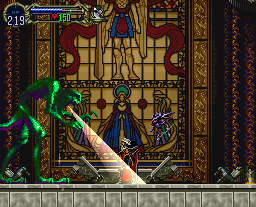 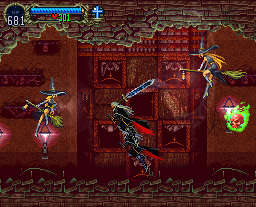 As exhilarating as obtaining replacements for my current equipment was, it didn't trump finding
items that promised access to barred regions of the castle. These items, called "relics," begot unique abilities like transformations and familiar conjuring. My favorites amongst the relics were those that altered the game's mechanics. I can still remember the excitement I felt upon unearthing the Leap Stone, which allowed Alucard to double-jump. Acquiring it meant that I could finally reach the lofty platforms in the clock tower and delve deeper into the trap-laden construct. Of course, that promised more exploration and loot.

Occasionally, I'd make excuses to return to specific territories only to hear their BGMs. We didn't have YouTube back in the Stone Age, so the only way to relive your favorite tracks from video games was to either search for hours via Excite or Netscape for decent MIDI files or play the games. Fortunately, I had no problem committing to the latter! I often padded back to the clock tower to "check something," only so I could hear the track entitled The Tragic Prince and its slowly building orchestral/synthesized introduction that eventually tapers off. Just as soon as silence sets in, the song resurrects with a roaring electric guitar that leads the arrangement back into full force. Though I'm a sucker for wild music like the aforementioned song, I do occasionally find myself hungering for slower paced pieces. For instance, I also contrived excuses to visit the abyssal section of the castle so I could listen to The Abandoned Pit. Something about this stirring piano melody and its peculiar ambient din--creatures crying in the distance, leathery wings flapping, creepy-crawlies chirping--called to mind dark secrets and forgotten depths. I loved how this cut, along with so many others, bolstered the game's atmosphere and instilled the impression that I really was exploring Dracula's castle.

Now and then the music would cease and I'd find the doorway behind me obstructed. I understood the significance of the silence and isolation, for it meant that I was about to duel with a horrific boss. Throughout my journey, I found myself at the mercy of titanic beasts and devious demons: battling an immense desiccated corpse called Beelzebub, tangling with tentacled wolf heads attached to a nude beauty known as Scylla, and once again locking horns with Dracula's right-hand man himself, Death. I relished hunting these beasts down and watching them crumble. Heck, even if they killed me I was satisfied, as the occasional challenging scuffle sated my inner masochist. 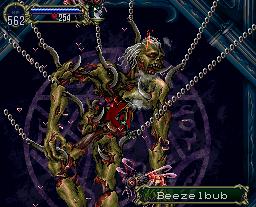 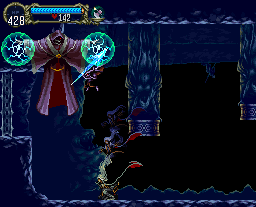 Though I adored Symphony for all of the above reasons, they were all minor topics in my circle of friends (all of whom either owned or had played the game). For us, a discussion on Symphony always descended into a round of quoting the game's many awesomely bad examples of dialogue and voice acting. Though we occasionally touched on Dracula's now-classic line ("What is a man? A miserable little pile of secrets!"), we tended to prefer Alucard's remarks. For instance, after chopping up a certain boss, Al says, "You claim to love the darkness. Go then and dwell there for all eternity." That line always sent tingles down my spine, yet simultaneously also made my inner Jay Sherman say, "Hotchie motchie!" Another golden moment wasn't actually a line, but a moan. At one point, Alucard defeats a succubus who had invaded his dreams, and he then informs her that she'll be spending the rest of eternity in limbo. Her response is a death cry that sounds like the worst fake orgasm ever recorded. Sadly this was the only moan that would play in my bedroom for years, but at least it was one that buddies and I found worthy of discussion.

Corny though it was, the dialogue was not awful enough to spoil the game. The instances of character interaction were sparse and brief, yet memorable enough (for all the wrong reasons) to stick with me for years. That's what my relationship with Castlevania: Symphony of the Night is like. I cherish so many facets of this game that even its minor flaws--which are heavily overshadowed its stellar exploration elements, strong atmosphere, breathtaking visuals, and fantastic soundtrack--occupy a special place in my heart.

© 1998-2021 HonestGamers
None of the material contained within this site may be reproduced in any conceivable fashion without permission from the author(s) of said material. This site is not sponsored or endorsed by Nintendo, Sega, Sony, Microsoft, or any other such party. Castlevania: Symphony of the Night is a registered trademark of its copyright holder. This site makes no claim to Castlevania: Symphony of the Night, its characters, screenshots, artwork, music, or any intellectual property contained within. Opinions expressed on this site do not necessarily represent the opinion of site staff or sponsors. Staff and freelance reviews are typically written based on time spent with a retail review copy or review key for the game that is provided by its publisher.