Even if I hadnt already known that Tank! Tank! Tank! for Wii U was first released in Japanese arcades back in 2009, I might have guessed as much. Games that are designed to suck quarters tend to suffer from a lack of depth, which isnt a problem when you can drop a few quarters before moving onto other things. When those same attributes apply to a home conversion with a high sticker price, though, its harder to overlook such flaws.

In Tank! Tank! Tank!, players use one of 20 different tanks to fend off mechanical monstrosities that are attacking Earth at some point in the (presumably) distant future. Theres no more to the story than that, and the characters who talk to you between missions spend more of their time telling you how to play the game than they do fleshing out a story that didnt even really need to exist. 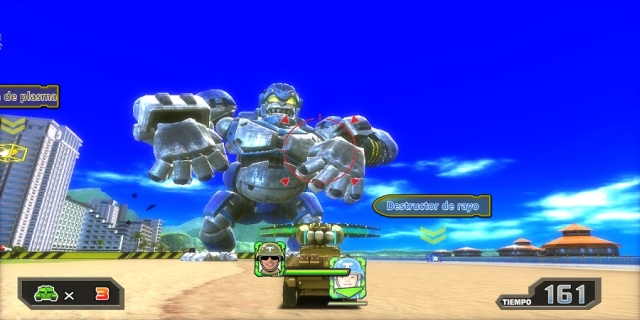 Ive never played the arcade version, so I cant confidently say how it presented the levels or even how many unique stages were on offer. On the Wii U, there are nearly 40 stages and they mostly require between one and four minutes to complete. As you vanquish foes, youll earn coins that are automatically used to unlock additional vehicles. You also need a certain number of coins before you can access stages at a few key points, which bars you from clearing the game until you have obtained more than 100 coins. This system is clearly intended to force you to experiment with multiple tanks, since each vehicle is awarded a separate coin upon clearing a given stage.

While a roster of 20 tanks ought to offer a lot of variety, thats not really the case. There are only five unique tank classes, meaning that the differences between most of them are cosmetic. The other distinction is that different special weapons and stats are also available. The latter can be improved as you gain experience points from finishing stages, but a fully powered tank isnt a lot more useful than one you get when starting out. The very first tanks that are made available to you also turn out to be some of the most reliable ones, so theres little incentive to unlock any others though you will have at least 15 of them available anyway by the time you reach the closing credits.

Unfortunately, the only objective youre ever given is to kill everything that moves. Thats not entirely bad, since mayhem can be a lot of fun, but there arent enough enemy types available to keep things interesting across so many stages. Youll wind up fighting most of the same monster waves three or four times over the course of the campaign, and the last 20 stages or so are mostly just battles against the same few giant enemies. 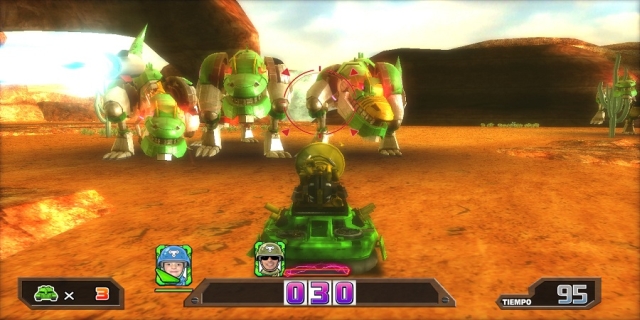 Perhaps the real problem, to a greater extent than even the recycled enemies, is the fact that you must clear every stage the same way if you want to find real success. Youll start by doing minor damage with your regular guns while the computer informs you that you wont win that way. Then you can grab special ammo pickups that materialize (its possible to hasten their appearance by destroying nearby architecture). Those power-ups have limited use, so you must aim them carefully at your targets while strafing to avoid enemy fire, and you also need to watch for more ammo drops so that you can bring a steady stream of pain to your enemies. Your combat companion will probably beat you to the best weapons sometimes--and then mostly waste them--which is frustrating if youre running out of time but not a particularly big deal if things are going well. Essentially, the winning strategy is to always go for the best weapon whenever it appears--even if doing so is mildly dangerous--and then try to use it against multiple enemies when possible so that you dont have to keep looking for still more ammo. Your comfort with that simple routine will determine how smoothly things go as you play.

If you want to have the most fun with Tank! Tank! Tank!, you should really try to play it on a large television screen available. Most of the games appeal comes from its bombastic approach, and the bulk of the action has more impact if everything looks ginormous and you have some sweet speakers. Buildings crumble like paper cups in a campfire, and the sight of a huge mammoth stomping into view is generally quite impressive even after youve seen it a dozen times but a smaller screen does none of that any justice. Regardless of screen size, youll soon realize that the environments where you battle really are really just giant boxes with nice artwork and a few rock formations or buildings sprinkled throughout. Enemies appear from black holes, and only a few of them interact with the environment at all. Knocking a huge mechanical gorilla into waves lapping against a resort shore wont create the satisfying splash that it should, and the only purpose rock walls and such seem to serve is that they obscure your targets.

Much like the environments, the games control scheme is serviceable but unremarkable overall. The Wii U gamepad functions as a standard motion controller. You tilt it to adjust your cannons aim, and the analog stick controls vehicle movement. A single button fires your active weapon, and thats the extent of things. I played through half the game without realizing that tilting the gamepad affected things, until I found my tank wanting to roam in circles because I was holding the gamepad at an angle. The Wii U hardware ultimately doesnt add much to the experience at all, except when youre taking a picture of yourself to use as an avatar (with ridiculous overlays that function as costumes, such as an oversized mustache or a ginger wig), or when you want to play the whole game on the smaller screen because someone else needs the television. 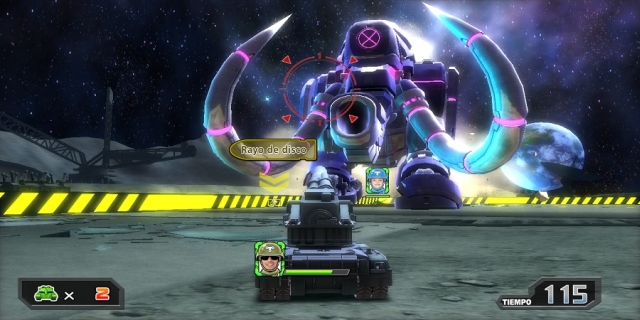 Fortunately, simplistic controls mean that friends can join in by using Wii Remotes and not feel like theyre at a real disadvantage. This allows for some chaotic multi-player modes, whether you have someone helping out in a cooperative mode or you decide to enjoy a free-for-all battle. Its even possible for one player--the one with the gamepad--to assume control of a boss monster while everyone else tries to take him out before the timer expires. I wish that there were more options, but the developers were probably rushing to have things ready by the Wii Us launch.

As a simple diversion, Tank! Tank! Tank! works well. It could really have benefitted from an online mode. Mission variety wouldnt have gone astray, either, whether it came in the form of more unique enemies or mission objectives or even just a few more distinct environments. Youll probably tire of playing the game long before you reach its closing credits, just because so much of the content repeats, but that doesnt mean its not worth a look if you can find it at a suitably low price. Otherwise, you should steer clear.

If you enjoyed this Tank! Tank! Tank! review, you're encouraged to discuss it with the author and with other members of the site's community. If you don't already have an HonestGamers account, you can sign up for one in a snap. Thank you for reading!

© 1998-2021 HonestGamers
None of the material contained within this site may be reproduced in any conceivable fashion without permission from the author(s) of said material. This site is not sponsored or endorsed by Nintendo, Sega, Sony, Microsoft, or any other such party. Tank! Tank! Tank! is a registered trademark of its copyright holder. This site makes no claim to Tank! Tank! Tank!, its characters, screenshots, artwork, music, or any intellectual property contained within. Opinions expressed on this site do not necessarily represent the opinion of site staff or sponsors. Staff and freelance reviews are typically written based on time spent with a retail review copy or review key for the game that is provided by its publisher.