Though it wasnt a hit with everyone, Disney Epic Mickey for Wii did enough things right that it felt like the start of a fantastic new franchise. Aided by a magical brush stolen from a kindly wizard, the mischievous Mickey Mouse could either bring the gloomy world of Wasteland to vibrant life, or he could erase it with destructive thinner, all while interacting with forgotten relics from animations golden age. The concept and its execution certainly werent perfect, but they came across with enough flair that it was easy to anticipate the exciting next steps the franchise might take in its next installment.

Unfortunately, Disney Epic Mickey 2: The Power of Two is a disappointment compared to its imperfect but promising predecessor. The ambition and inventiveness that were so evident the first time around have been obscured by a sloppy retread that may well leave you wondering why anyone bothered to create it. 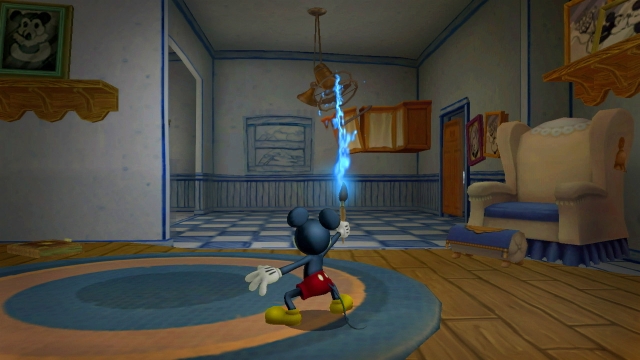 The new story takes place in the now-familiar world of Wasteland. In the opening sequence, a terrible earthquake threatens to tear that haven apart. A chasm appears in Mean Street, the town where most of the worlds residents live, and the Mad Doctor (one of the lead villains in the first game) appears in a horrific Beetleworx machine. Hes here as a friend, though, he insists in song. He can put a stop to the quakes, but he needs a hero to help. Oswald bravely steps up to the plate. With their hero temporarily indisposed and a few suspicions raised, several remaining toons summon Mickey Mouse, who retreated to the real world after the events depicted in Disney Epic Mickey. Once again, Mickey jumps through the looking glass in his bedroom and finds a brush in the magicians basement. Once again, he dives into Wasteland. Upon arriving, he is almost immediately reunited with Oswald, who has thankfully returned safely. Together, the pair embarks on a mission to find out just who or what is causing all this trouble in Wasteland.

As stories go, the one that gives The Power of Two structure is serviceable. The singing Mad Doctor is more interesting this time around than he was the before, and Oswald is a purely sympathetic character. Youll also meet a few new faces, but in general theres an overwhelming realization that youve seen most of this before and it was better in that previous instance. The worlds felt more lively and expansive. Everything was new and different. Here, youre touring some--but not even all--of the areas from the first game, only now theyve been ravaged by a quake.

If youre in a hurry and you dont get stuck by the occasionally obtuse puzzle design, you can blow through the games three main acts in a few brief hours. Speed runs will probably take the time required down to no more than an hour or two. Of course, there are rewards in place if you take your time and explore everything properly. Mickey can acquire a camera and take pictures of noteworthy places and objects, for example. He can also find a bunch of collectible pins (as he could previously) and various costumes and such. If you decide to do everything, youll likely triple the amount of time that you spend in Wasteland, but none of that changes the fact that youre playing a relatively short game and not everyone enjoys collecting trinkets for hours. Its difficult not to wonder if much more content was planned, then simply chopped because someone who was bankrolling the project lost interest in spending the money that would have been necessary to see it through to the intended conclusion. This is likely a case where a little more time in development could have worked wonders. 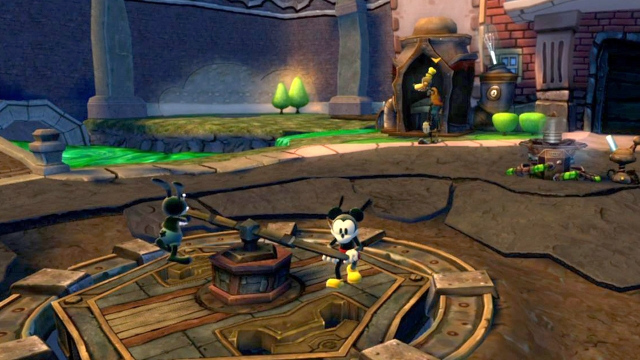 One improvement the game boasts compared to its predecessor is the cooperative play, though thats not as positive a change as it probably should have been. The first player controls Mickey Mouse, and a second player can join in with a Wii Remote and attachment (the Classic Controller is supported, or else you can use a Nunchuck). The screen splits down the middle when two people are playing, even if theyre close to one another, and the camera seems to stutter a lot if you try to rotate it much while both characters are in the game. Aiming reticules also behave oddly, which produces an effect that feels like lag.

If you dont have a friend playing, Oswald is controlled by the computer. That doesnt work out very well. He mostly serves as a distraction for enemies, since he has the ability to shock them with his electric remote, but sometimes youll need to partner with him to flip switches or to leap and then float to distant ledges. Often, Oswald is either trailing ridiculously far behind--so that you have to pause and wait for him to catch up--or hes getting in your way and berating you as you try to spray a nearby foe with paint or thinner. He has a tendency to get hung up on the level architecture, and sometimes youll find two switches that need to be pressed or attacked simultaneously. Hell often just wander around, not choosing to interact with them. Then you realize that he arbitrarily is interested in only the switch youre nearest to. You have to guess which one he might like to use. At least he does revive you if you happen to lose all your life and hes close at hand, though such instances are rare.

Perhaps the biggest knock against the game, though, is the fact that you cant use the Wii Remote and Nunchuck to control Mickey Mouse. Disney Epic Mickey on Wii was enjoyable in part because the design benefitted so much from that particular controller. Here, youre expected to move around and paint as quickly and expertly as you might have in the first game, but now you do it by moving a finicky reticle around using the gamepads right analog stick. That reticle tends to move either too quickly or too slowly (almost never anything in between), which can give you trouble when you need to target moving objects, or objects placed at a moderate distance. Since those conditions rather often apply, controlling Mickey Mouse is all too often an exercise in frustration. 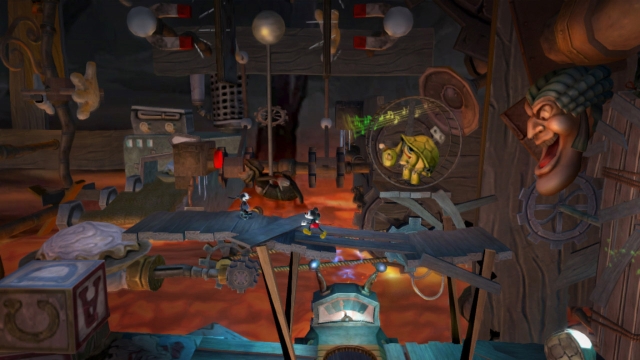 If youre looking for something to like about the sequel, your best bet is to stop and admire the visuals. The muddy texture work that the limited Wii hardware made necessary is gone, which means that the few portions of Wasteland you actually get to see look very nice indeed. Crisp visuals definitely lend the game the appropriately cartoony vibe it always needed, and thats welcome. The voice work is also quite solid, as the actors really commit to their roles. None of it is so amazing that youll want to stop and stare at it, though. Other games have managed comparable performances for years at this point.

Despite appearing on superior hardware, Disney Epic Mickey 2: The Power of Two is a tragic disappointment. Theres still some quality content available, but the world of Wasteland and its merry band of misfits are capable of so much better. Theyve already proven that with the first game. If Disney does decide to revisit the world again in the future, hopefully it commits to the effort and moves things forward with artistic flair and technical refinement. Another step backward would definitely mean the end of a promising road, if that point hasnt been reached already, and that would be a real shame.

If you enjoyed this Disney Epic Mickey 2: The Power of Two review, you're encouraged to discuss it with the author and with other members of the site's community. If you don't already have an HonestGamers account, you can sign up for one in a snap. Thank you for reading!

© 1998-2021 HonestGamers
None of the material contained within this site may be reproduced in any conceivable fashion without permission from the author(s) of said material. This site is not sponsored or endorsed by Nintendo, Sega, Sony, Microsoft, or any other such party. Disney Epic Mickey 2: The Power of Two is a registered trademark of its copyright holder. This site makes no claim to Disney Epic Mickey 2: The Power of Two, its characters, screenshots, artwork, music, or any intellectual property contained within. Opinions expressed on this site do not necessarily represent the opinion of site staff or sponsors. Staff and freelance reviews are typically written based on time spent with a retail review copy or review key for the game that is provided by its publisher.