In Sonic & All-Stars Racing Transformed for Wii U, playing through the World Tour mode allows you to unlock racers that include a handful of system-exclusive characters. They are: Wreck-It Ralph, the star of the Disney animated feature about a reformed video game villain; Danica Patrick, spokesperson for GoDaddy web hosting and a stock car racer to boot; Captain Crunch, the mascot of the cereal bearing the same name. Actually, the last one was a lie but would an appearance from such a character really have come as a surprise, given the motley lineup already in place?

Whatever you might think of the exclusive drivers, or even a standard roster with diverse mascots hailing from Super Monkey Ball, Jet Set Radio, NiGHTS Into Dreams and even Skies of Arcadia, theres no denying that Sonic & All-Stars Racing Transformed is a kart racer that offers a wealth of options, much like its predecessor did. Give it a chance and youre virtually guaranteed to have a good time as long as you dont hate the kart racing genre on principle and can overlook a few unfortunate flaws. 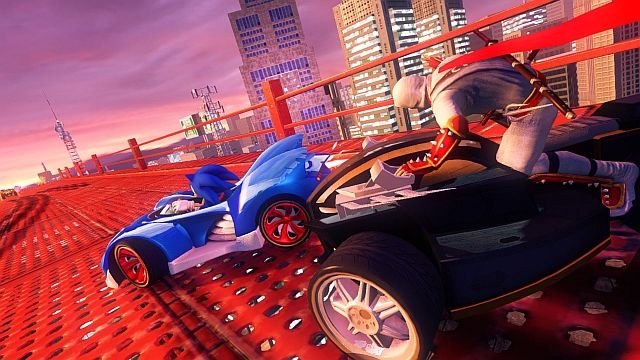 The last time Sonic and his fellow mascots raced on Nintendo hardware, they were limited by Wiis graphical capabilities. Xbox 360 or PlayStation 3 versions of the game were superior because they featured high-definition visuals that really brought the colorful, detailed worlds to life. This time, though, the Wii U is quite capable of delivering the amazing vistas that were previously out of reach. If you appreciate gorgeous environments, great draw distance and smooth animation, youll have to search fairly hard to find anything to complain about. The team at Sumo Digital has really outdone itself.

Gorgeous graphics arent the games only hook, though. Instead, youre supposed to be interested in the Transformed part of the title, which fittingly refers to the transformation the various vehicles undergo as you work through a given course. Youll feel like youre playing a cartoony version of Spy Hunter when your kart launches over a ramp, loses its wheels and turns into a speedboat or plane. Generally, theres not a lot of variety within a single lap, but some courses change dramatically as you come around the second or third time; floating islands in the sky might crumble apart amid cannon fire as you find yourself forced to fly through the last third of the race, for instance.

Though there are only 16 new tracks (along with mirrored versions and an additional 4 returning favorites from the first title that add some longevity to the proceedings), the available selections are anything but basic. The way that they evolve partway through a race makes them feel much larger than the designs from the first game, and a few courses can take 7 or 8 minutes to complete. The new tracks also do a great job honoring their source material. Of particular note is the NiGHTS Into Dreams stage, which finds you flying through the familiar orange rings and even chasing after a fat ballerina on an oversized ball who crashes through walls just like one of the bosses in that classic title. Its quite spectacular and it shows that Sumo Digital really is familiar with the previous titles that inspired this kart racer. 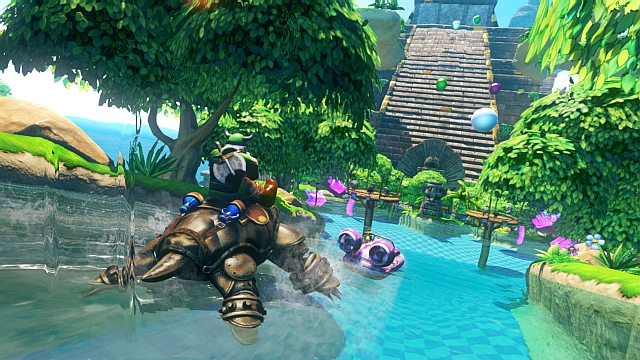 Another change to the original formula is the World Tour mode, which adds mission objectives to the mix. There were a lot of unique challenges in the first game, but now theyre presented in a more structured manner. You advance along a map, completing challenges to earn stars that you can then use to unlock nodes and clear gates. Theres a lot of variety in objectives, too. Sometimes you just need to race, but in other cases youll be challenged to complete a course with a limited timer by drifting on colored markers (which adds precious seconds to the clock), or youll have to chase an armored tank and pelt it with missiles you gather while dodging its return fire. The World Tour mode does a great job of motivating the player to improve. Even if you complete a stage on a lower setting, you might find yourself short of stars and that will prompt you to revisit a race in a more challenging form to secure a better reward.

Mods are another interesting feature in Sonic & All-Stars Racing Transformed. The more you play with an individual racer, the more experience points youll earn. That will allow you to level up that vehicle, granting you access to kits that adjust the vehicles stats in certain ways. You might like the way a car drives by default, but perhaps youd happily give up some points in the handling category to improve your acceleration and top speed. A mod will let you do that, assuming you have leveled up enough. The best mod for each vehicle is hidden away in World Tour mode, though, so youll have to experience each of the games elements on your way to unlocking everything.

Unfortunately, theres a glitch in place right now that will prevent a lot of players from accessing everything. Some of the boost courses in World Tour mode are missing checkpoint markers. Youre required to pass through a certain number of checkpoints to clear a stage, and around half of the checkpoints simply dont appear. This renders those courses impossible to complete. If you attempt them on the easiest setting, you can sometimes choose to skip them after you have failed to win several times in a row, but a handful of the courses cant be ignored because they lead to character unlocks. Thats a disappointing and rather unusual issue, but it will hopefully be fixed soon and with luck it wont affect the game in the long term. 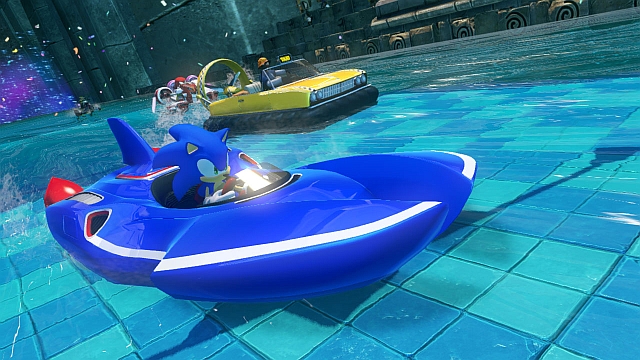 Another negative point worth mentioning is that the gamepad will sometimes mirror the action that is happening on-screen, but oftentimes it will instead show you a relatively useless map of the course instead, depriving you of the ability to play the game while someone else uses the TV. Multi-player modes support a second and third Wii Remote with Nunchuk accessory or a Classic Controller, but theres no Pro controller option. Both of those design decisions feel like oversights, but theyre not a big deal if youre aware of them ahead of time. Online play is also offered, but for now its hard to recommend because there are frequent lost connections. Lobbies can be difficult to find, and players might join and then disappear before a match actually starts. Hopefully, the situation will improve as the Wii U install base continues to grow, but theres certainly no guarantee.

Thanks to some ambitious course design and a few smart adjustments to the standard formula that debuted in its predecessor, Sonic & All-Stars Racing Transformed offers nearly everything you might hope to see in a sequel. It retains rough edges in a few places, but such flaws dont prevent the game from being a solid experience in the short term and some of those flaws may disappear entirely in time. If you like kart racers, theres currently no better option on Wii U and that may not change for quite some time, if it does at all. Mario Kart had best be looking over its shoulder at this point. Sonic and his all-star friends are playing for keeps.

If you enjoyed this Sonic & All-Stars Racing: Transformed review, you're encouraged to discuss it with the author and with other members of the site's community. If you don't already have an HonestGamers account, you can sign up for one in a snap. Thank you for reading!

© 1998-2022 HonestGamers
None of the material contained within this site may be reproduced in any conceivable fashion without permission from the author(s) of said material. This site is not sponsored or endorsed by Nintendo, Sega, Sony, Microsoft, or any other such party. Sonic & All-Stars Racing: Transformed is a registered trademark of its copyright holder. This site makes no claim to Sonic & All-Stars Racing: Transformed, its characters, screenshots, artwork, music, or any intellectual property contained within. Opinions expressed on this site do not necessarily represent the opinion of site staff or sponsors. Staff and freelance reviews are typically written based on time spent with a retail review copy or review key for the game that is provided by its publisher.