Skylanders: Spyros Adventure was a pleasant surprise when it arrived in October of 2011. The developers produced a pleasant mix of action and adventure gaming that was already more than decent, then added collectible figures that interact with a USB-powered portal to expand the game in surprising new ways. Players could add hours of play by purchasing any of more than 30 collectible plastic figures for $8 apiece (three were also included as part of the initial package), and that content also looked cool sitting on the shelf when it wasnt in use.

Spyros Adventure caught critics by surprise, and it did the same for retailers and perhaps even for the games publisher, Activision. In the months following that original titles release, store shelves that were supposed to contain the special figures were commonly bare. Shipments would arrive at stores in the morning and they would be gone within an hour. Recently, retailers finally were able to start stocking an ample supply of the toys, but another shortage could be on its way thanks to the recent release of a sequel: Skylanders Giants. 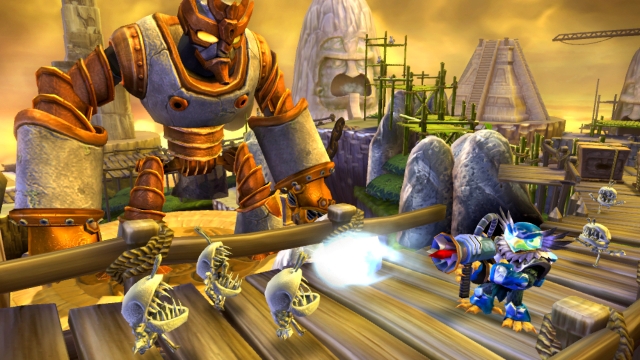 Like Spyros Adventure before it, Skylanders Giants comes with three figures and a portal of power (or at least, it does if you wisely purchase the starter pack for $80). Those characters are Jet-Vac, Cynder, and Tree Rex. The first two characters are new additions to the roster that resemble the pack-in warriors that shipped with the previous title (though Cynder is actually an updated variation of an older character). The third character is one of the new giant ones and it occupies more space on the portal.

Whoever was responsible for choosing the pack-in characters this time around did right by consumers. There are no repeat elements. The world of Skylanders is comprised of eight elements: wind, life, death, earth, fire, magic, tech, and water. Last time around, the included figurines tended to the last three of those, while this time the first three are covered. Thus, those who own both sets will be missing only characters of the earth and fire elements.

Of course, the star character this time around is Tree Rex. His figure is attractively designed, with a green gem on its right fist glows when the figurine is placed on the portal, plus blue crystal eyes light up as if Tree Rex has come to life. His in-game abilities are more important, though. While wandering throughout Skylands, the giant warrior can stomp through crates to break them, crash through weakened tiles to reveal hidden treasure chambers, break down gates with his fists, or grab various pieces of the architecture and interact with them in ways the smaller fellows just cant handle. Youll immediately grasp the appeal once Tree Rex unearths a boulder, lifts it over his head, then tosses it at a group of approaching enemies. 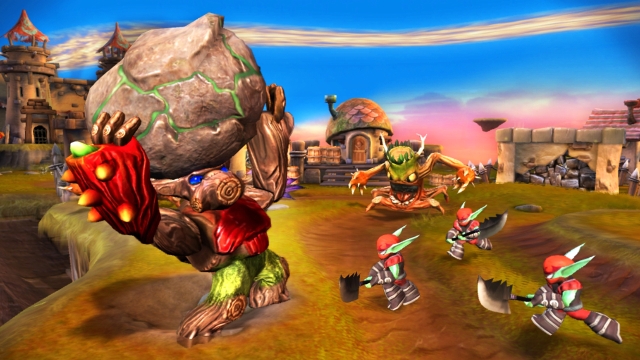 Though they are cool, the larger characters naturally come at a price. Youll have to pay an extra $3 or $4 for each of the larger figures that you might later choose to purchase separately. Fortunately, owning just Tree Rex is enough to satisfy anyone but a collector. Many areas that require a giant are merely blocked off by a stone gate, and theres usually a bomb somewhere nearby that you can use to gain entry if your giant has fallen in battle or is otherwise unavailable. If you already have a bunch of figures from playing Spyros Adventure, you can also bring them into the fray and theyll still possess any items that you had previously equipped. They also will have retained their levels and abilities, a fact that provides you a nice head start on the latest adventure. If youd rather use all-new characters, however, thats also possible; there are around 16 new figures available, bringing the total number of characters to a whopping 48. That figure includes variations (Eruptor is available in a standard form, and in a lightcore form with a base that glows when near the portal), but the roster is impressively large even when you toss those near-duplicates to the side for a moment. If you consider the complete list of variants available now, the actual number is more like 100 (and growing, one can assume).

While the thought of new characters at $12 and $15 apiece might have distressing dollar signs dancing in the typical parents head, the good news is that a number of the games new features dont require additional monetary investment after the fact. The most noteworthy of the additions is undoubtedly Skystones, a fun card game that strangers throughout the world of Skylands enjoy playing. The basic rule is that a card can have up to four arrows attached to each of its sides. You and your opponent take turns placing cards on a 3x3 grid. A more powerful card will cause your adversarys card to become yours (only for the duration of the match), and the winner is the individual with the most claimed cards once the match ends. Theres actually a fair bit of strategy involved, particularly in the early going when you havent built up a strong and versatile deck. New cards must be won by defeating wily opponents, or they can sometimes be purchased from a wandering shopkeeper. The process can be quite addictive.

Special challenges also expand the game. The level hub this time around is Flynns flying ship, which over the course of the game is occupied by a variety of friendly NPCs. Between levels, you can complete missions for stat boosts (for example, you might be asked to clear a dungeon of giant spiders within a set time, or you may need to skate around an icy course and beat the course record). There also are special arena battles, and youll gain additional options by spending hard-earned coins throughout the main adventure. 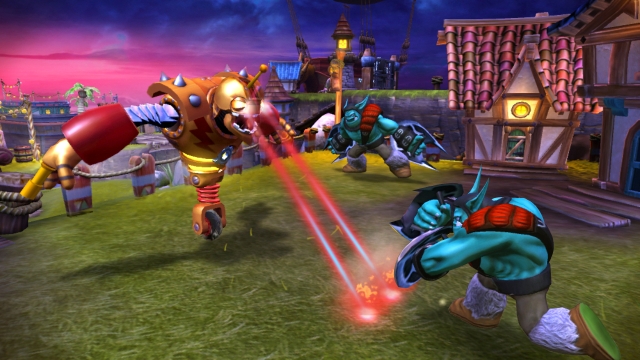 Even when its not adding new features, Skylanders Giants represents an improvement over its capable predecessor. Level design doesnt take you through quite the obvious variety of areas, but there are some truly ambitious areas that should definitely stand out in your mind. In one chapter, the characters visit a world with animatronic inhabitants and can activate a switch to animate them (or press it again to render them motionless once more). In another chapter, youll get a glimpse at the villains younger days, which adds more depth to a character that quite frankly needed it. Overall, the stages also seem to have been designed more carefully. There is loot hidden deviously throughout the environments, enough that youll need a strategy guide if you want to find it all on your first trip. Youll likely make multiple visits anyway, though, just so you can level up the various characters and complete secondary mission objectives.

Skylanders Giants doesnt have many issues, and even some of those things that you might identify as flaws come down to personal preference. Some players might see the appearance of a number of familiar elements (such as the giant turtles and gate puzzles) as a retread, while others will tend to view it all as a charming homage of the ongoing mythology. Some might welcome the elevated difficulty level within the last two or three chapters and others may feel that those last dungeons are a tiresome slog. Finally, some might view the thin and occasionally unfocused plotabout an attempt to beat Kaos to a powerful artifactas weak writing, but other gamers of all ages are likely to find themselves too busy laughing at the humorous and professionally-voiced dialog to care.

Whether Skylanders Giants represents your first or second visit to the world of Skylands, youll almost certainly have a fantastic time with it. The development team at Toys for Bob could have easily slapped together a few new maps and thrown a bunch more figures into the mix and called it good. Instead, they improved the game in nearly every way. When it comes to surprises, Skylanders is two for two.

If you enjoyed this Skylanders Giants review, you're encouraged to discuss it with the author and with other members of the site's community. If you don't already have an HonestGamers account, you can sign up for one in a snap. Thank you for reading!

© 1998 - 2022 HonestGamers
None of the material contained within this site may be reproduced in any conceivable fashion without permission from the author(s) of said material. This site is not sponsored or endorsed by Nintendo, Sega, Sony, Microsoft, or any other such party. Skylanders Giants is a registered trademark of its copyright holder. This site makes no claim to Skylanders Giants, its characters, screenshots, artwork, music, or any intellectual property contained within. Opinions expressed on this site do not necessarily represent the opinion of site staff or sponsors. Staff and freelance reviews are typically written based on time spent with a retail review copy or review key for the game that is provided by its publisher.