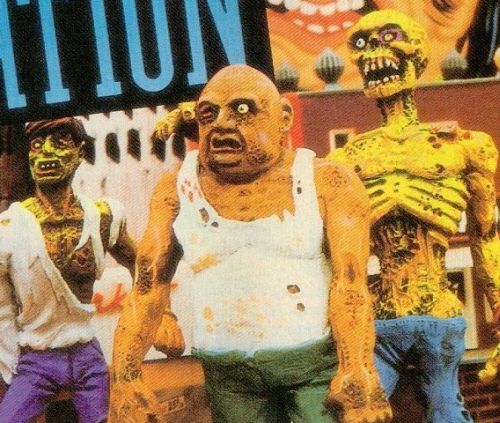 From out of the quiet night sky, Earth's future fell and crashed into the Great Basin Desert. There a sentient being crawled from the crater, pleased that it had finally located an inhabited yet minuscule astronomical object of questionable import to the whole of the universe. At last, the creature known as Darc Seed could enact its plan to enslave a relatively young species to do its sinister bidding. With minimal concentration, it sent magnetic rays all across the United States, transforming its citizens into ravenous zombies and giving the beast dominion over military weaponry. Also joining Darc Seed's villainous roster were a menagerie of destructive monsters and a legendary samurai sword said to be the most powerful weapon on the planet: Shura. With his army amassed, Darc Seed stood undisputed as the new overlord of Planet Earth.

All the world remained cowed, too frightened to stand up to the intergalactic bully. Even the planet's remaining scientists, who gathered to brainstorm one final measure against evil, reached the unanimous conclusion that Planet Earth was screwed. They calculated that the world would be "zombified" by the next morning, joining Darc Seed's undead collection. All humanity reached a general consensus in light of this: they needed a hero, but they were only holding out for one until the end of the night. This brave soul would have to be strong, fast, and fresh from the fight. In other words, he'd have to be an enormous, flying, disembodied samurai head with the ability to fire projectiles at a moderate pace.

Little did the world know their prayers would be answered. 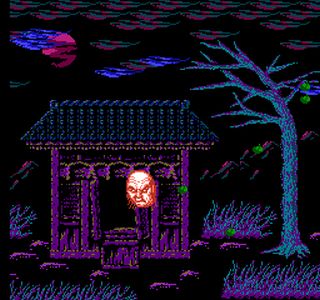 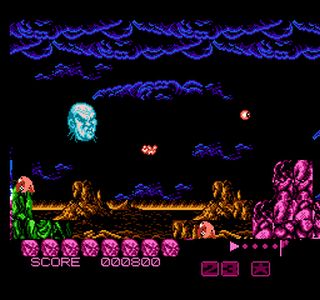 So out into the world flew the giant head that could, Namakubi, vomiting caustic saliva and making awkward faces everywhere he went. Darc Seed's forces and massive bits of environment obstructed his path, but he cut through them like a hot knife through butter. Although he destroyed plenty, casual onlookers from outside the US noticed a rather flat countenance on the samurai's face.

"Mommy, what's the matter with Mr. Samurai Hero Head Guy?"
"I think he's bored, honey."
"Golly, at this rate those blasted aliens could just bore him to death!"

Despite absolutely gorgeous and atmospheric scenery, from a beautifully dark city skyline to a breathtaking, stormy desert sunset, our hero faced a wicked adversity in boredom. Many of the locations he visited consisted overmuch of destructible environments like buildings and mountains. While he relished the cathartic destruction at first (read: for about ten seconds), he found it growing steadily chore-like. He hoped and prayed for more challenging adversaries to appear, even begged that they would arrive in patterns and clog the airway with their projectiles. No such luck. Opponents were not only few in number, but in type. Some of them weren't even much of a threat, as they either perished with a few shots or launched easily avoided attacks.

Namakubi tried to remain steadfast. He continued to chug along and barf on his foes with all the gusto he could muster. Sadly, and for the first time in his long history, he found his joy for the righteous destruction of evil waning.

In life, Namakubi had reveled in the demise of his enemies, but now he felt inadequate. Even though he could increase the speed of his shots by saving innocent bystanders, nothing could assuage his desire for added badassery. Instead, the disembodied one was stuck with the same dull double-projectile shot that barely got the job done. One ball of spittle flew out in front of him, causing minimal damage, while the other plummeted to the ground. He might not have found this a terrible setup were it not for the fact that, even with a full upgrade, his rate of fire was underwhelming. 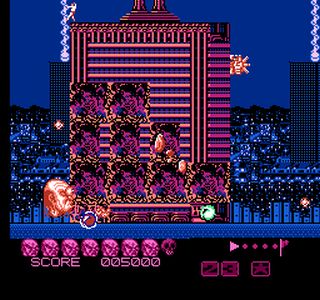 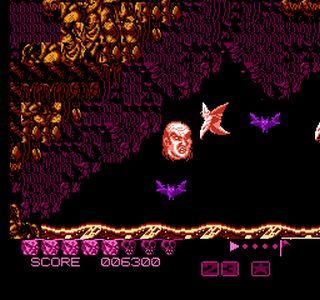 Namakubi had to have known his quest was damned from the start, as the poor cranial warrior didn't take to the air naturally. He found that he couldn't maneuver himself with grace and deftly dodge attacks. Whenever he attempted a slight move, he wound up making a sizable maneuver. This often caused him to collide with stimuli he aimed to avoid. It was even worse if he took a blow, which sent him bouncing all about the area. This sometimes enacted a vicious cycle in which he'd take blow after blow, continually bouncing before luckily regaining his composure succumbing to his wounds.

It was enough that Namakubi questioned his motives in liberating America and protecting the rest of the free world. He wondered especially if it was worth the boredom and frustration to engage in a final battle with Darc Seed. After all, what had the old Darc done to deserve his indignation? Nothing. He simply landed on a planet, exploited its dominant species as per his nature, and desired nothing but to be left alone with his undead peons. Namakubi could dig that.

Zombie Nation doesn't fail for lack of trying or because it was rushed. You can tell by the fantastic presentation and creatively outlandish plot that the developers put some thought into it. You can also tell by how overly sensitive the controls are that the developers intended for slippery control response, likely to add challenge to the game. This is especially so since most obstacles and projectiles can be easily evaded and most foes croak easily. If you think about it, though, that's like intending for a somber atmosphere in a feel-good comedy. In a shooter, extremely loose controls serve only to infuriate gamers by adding an element of cheapness to the difficulty. This is precisely what the game does, and it pays for it in the end. Instead of an action-packed mixture of beauty and quirk, Zombie Nation is an unstable and tedious shooter.

If you enjoyed this Zombie Nation review, you're encouraged to discuss it with the author and with other members of the site's community. If you don't already have an HonestGamers account, you can sign up for one in a snap. Thank you for reading!

© 1998-2022 HonestGamers
None of the material contained within this site may be reproduced in any conceivable fashion without permission from the author(s) of said material. This site is not sponsored or endorsed by Nintendo, Sega, Sony, Microsoft, or any other such party. Zombie Nation is a registered trademark of its copyright holder. This site makes no claim to Zombie Nation, its characters, screenshots, artwork, music, or any intellectual property contained within. Opinions expressed on this site do not necessarily represent the opinion of site staff or sponsors. Staff and freelance reviews are typically written based on time spent with a retail review copy or review key for the game that is provided by its publisher.