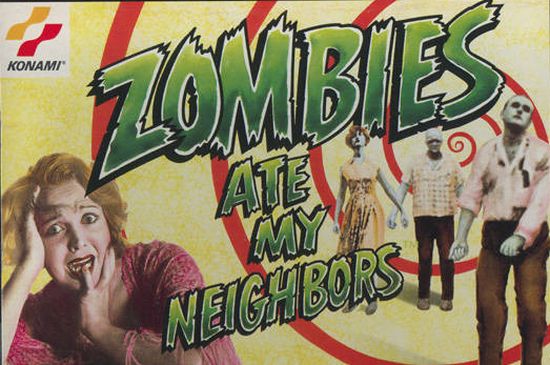 There was a time when the "Lucas" name meant something, and that time was called The Early '90s. It was a purer time, when Hayden Christensen wasn't Darth Vader, Jar Jar Binks had yet to be defecated into existence, and LucasArts produced decent to exceptional titles on SNES and Genesis. Of the games they had concocted, there was one that struck a cheesy chord with me: Zombies Ate My Neighbors. It was an enchanting action title that featured numerous references to b-movies from various eras of film, from black and white sci-fi thrillers like Them! to slasher flicks from the '80s like Friday the 13th. For a youngster in love with cheesy flicks, discovering this game was like meeting a kindred spirit.

Though my character was a geeky kid with blond hair and 3D glasses armed with a water gun, I felt more like David Warbeck in The Beyond or Rupert Everett in Dellamorte Dellamore, strutting all over the level while mercilessly gunning down zombies. I was the resident badass all the cheerleaders, babies, tourists, and other random neighbors cowered behind while the infinite army of undead manifested around us. Without missing a beat, I crushed all opposition, rescued every neighbor, and stockpiled weapons and items like mad. With fluid and fast-paced mechanics paired with simple arcade-style action, it was difficult not to stomp my enemies into the ground and develop a complex. 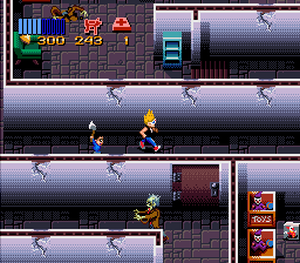 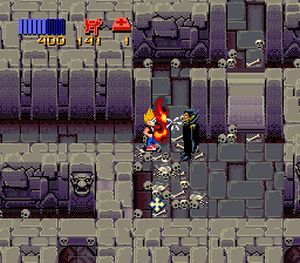 Badassery is fleeting, though, and Zombies eventually beat the smugness out of me. It achieved this by overwhelming me with scores of foes, even going so far as to toss in a variety of beasties with different movement patterns, strengths and weaknesses. Killer dolls like Chucky clones leaped out of toy boxes and chucked axes while hockey-masked chainsaw maniacs chased me through hedge mazes. Even surviving those two didn't grant much respite, as mighty werewolves bounded onto the screen, cursed mummies crept out of tombs, and gillmen rose from murky ponds. As a team, the game's menagerie proved to be too much for me, slipping through my offenses and tearing neighbor after neighbor to shreds.

Each time a neighbor expired, they were removed from subsequent levels. While this worked in my favor by giving me less neighbors to rescue before completing a stage, it was also my undoing. Eventually the neighbor population dwindled to a mere two, and my adversaries didn't have to work hard to end my game. It got to the point that I couldn't reach my remaining neighbors quickly enough. My only option was to go back to previous levels and step up my game in an attempt to preserve more neighbors for later stages and build up my inventory. Still, the going was rough.

Victory, however, wasn't totally out of reach. I could sense it drawing closer to my grasp as I amassed a greater and more diverse collection of weapons and consumable items, both of which I had learned to conserve. In no time, I possessed an impressive heap of medkits and various transformation potions, not to mention a fierce arsenal. "Fierce" may not be the first word you'd select, though, in describing my weaponry, consisting largely of flamethrowers and bazookas along side tomatoes and silverware. While many of the weapons sounded useless, I found that even the most ridiculous ones could drop certain creatures with a single hit. For instance, a can of soda may not sound threatening, but lobbing one at a killer doll quickly ends its reign of terror. Half the enjoyment I had with Zombies was discovering which weapons worked best against certain monsters. That only not only added an element of experimentation, but allowed me to learn how to efficiently destroy the damned while conserving my stockpile. 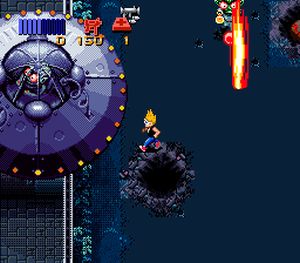 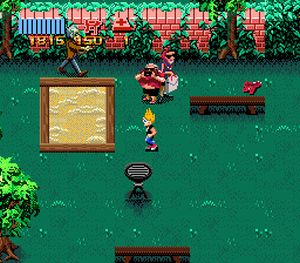 Even armed with some of the finest in ridiculous ordnance, I still found myself treading water at times. For the most part, I had difficulty keeping all of the neighbors alive, especially when the game resorted to cheap tactics. In one stage, for instance, I started off with about three neighbors behind a fence near a boss. Since I couldn't climb the fence, my only option was to watch in horror as the boss, a gigantic infant, trampled them. I still question to this day whether or not it was actually possible to rescue them, but part of me still believes that it was either poor or malicious planning on LucasArts' part.

Despite the trouncing I took, I still loved every minute and all forty-eight levels of Zombies Ate My Neighbors. For me, it's a reminder of what Lucas used to be: a fine company who delivered spectacular and unpretentious pieces of entertainment; who knew its audience well and delivered what they wanted. I wish I could say that about them nowadays. I shouldn't focus on the negative, though. It'd be a wiser usage of my time for me to fire up Zombies Ate My Neighbors and remember an older and greater LucasArts.

If you enjoyed this Zombies Ate My Neighbors review, you're encouraged to discuss it with the author and with other members of the site's community. If you don't already have an HonestGamers account, you can sign up for one in a snap. Thank you for reading!

© 1998-2021 HonestGamers
None of the material contained within this site may be reproduced in any conceivable fashion without permission from the author(s) of said material. This site is not sponsored or endorsed by Nintendo, Sega, Sony, Microsoft, or any other such party. Zombies Ate My Neighbors is a registered trademark of its copyright holder. This site makes no claim to Zombies Ate My Neighbors, its characters, screenshots, artwork, music, or any intellectual property contained within. Opinions expressed on this site do not necessarily represent the opinion of site staff or sponsors. Staff and freelance reviews are typically written based on time spent with a retail review copy or review key for the game that is provided by its publisher.