One of the problems with playing a truly classic game early on in life is that virtually all newer, similar titles will be unfairly compared to it. When I got a Nintendo in the late 80s, my parents also bought me The Legend of Zelda and from that moment forward, all other action-adventures I've played have gotten the "it'll never beat Zelda" reception from me. I loved a lot of those games, but the magic wasn't there to the same degree.

I give Illusion of Gaia credit, though  if it wasn't for one glaring flaw, it might have shaken my cynicism to its core, as Quintet developed quite the adventure for the SNES. I can't say this surprises me, as it is the middle game of a very strong "trilogy" developed by them for that system, starting with the excellent Soul Blazer and ending with the epic Terranigma. Still, it is refreshing to play a game like this and not constantly ponder a laundry list of things (both minor and major) the programmers got wrong.

Illusion of Gaia might be the most grounded of those three 16-bit Quintet adventures. While Soul Blazer and Terranigma place the player in control of mysterious deity-like characters destined to make (or remake) a world, this game delivered the teenage Will into my hands. Other than mild telekinetic abilities and a confusing past that involves the disappearance of both his and a friend's dad while trying to explore distant lands, young Will is about as unexceptional as you can get  in other words, pretty much par for the course for a J-RPG world-saving teenager for this era.

In fact, the beginning of the game is pretty much one big cliche. Shortly after the game begins, Will unintentionally gets on the wrong side of the local king and queen and is forced to flee the area with the rulers' spoiled and naive daughter. Those two join up with a small group of Will's friends and explore the world to find mysterious artifacts and eventually save everything from a fate most dire. Pretty cut and dry on the surface, but as you dig deeper, you'll find that Illusion of Gaia wonderfully establishes a dark and melancholy mood that effortlessly moves this game far beyond being "just another adventure". There's a pretty robust sub-plot involving slavery and there are all sorts of nasty little moments that make this a haunting game. This game makes sure you know you're not in some idealistic fantasy land  a point brought home early on when you find out the slavery ring has headquarters in the slummy back alleys of a city renown for its beauty. When you enter the town, you're greeted by the sight of beautiful flower petals wafting through the air  apparently to mask the stench of human trafficking going on behind the scenes. 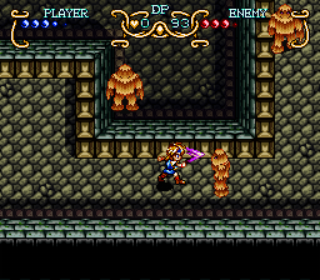 While Will is traveling the world with his companions, occasionally circumstances separate him from the pack and into a dungeon. These places tend to be awesome  a great mix of puzzles and monsters to meander through on your way to (hopefully) getting one of the necessary artifacts needed to reach the Tower of Babel (the goal of the disastrous mission led by Will's father). The Hanging Gardens is divided into four mini-dungeons each containing an item necessary to create a bridge to the boss fight. Shortly afterwards, you'll be in the submerged region of Mu, where you'll have to find ways to lower the water level to progress. Later in the game, you'll find that a great pyramid is mostly underground, so you'll have to find a way to descend through the earth in order to explore more than the top floor.

Helping Will in doing all of this is the (cliched) realization that he's not quite as ordinary as he seems to be. Scattered all over the world are mystical doors leading to dark spaces where he can transform into a pair of superior alter-egos. Freedan is an adult warrior with superior range and power to Will, while Shadow is not only incredibly strong, but also has the potentially game-breaking ability to dissolve into a puddle, becoming temporarily invincible in the process  which is why his powers aren't unlocked until the next-to-last dungeon, I'd wager. A big part of making it through the dungeons is learning when to hit up a dark space to change form, as all three have specific abilities necessary to solve puzzles and get past obstacles.

While the game isn't very difficult, with the exception of a couple boss fights, you do have to be careful. Will (and his various forms) can get healed in any dark space, but outside of these places, you'll need to hope monsters drop health items or that you have herbs in your inventory. You can't buy those items anywhere and there are only a few of them scattered throughout the game, so it doesn't take long to figure out that it's mandatory to learn enemy patterns. It's simply not easy to recover from serious blunders, and when you're dealing with a place like the game's optional bonus dungeon, which contains no dark spaces, you probably don't want to have ANY miscues along the path to its really tough boss.

Getting to that place was a bit of a hassle, though, as you need to find all 50 of the red gems hidden throughout the game to gain admittance. The instruction book pretty much tells you where to find them, but if you don't have that in your hands, good luck collecting them all without a guide. Most of them are in dungeons or given as rewards for completing easy tasks, but there are a few that involve you hitting the "search" button in seemingly random places. A bit annoying, considering this dungeon is necessary to complete if you truly want closure for that whole slavery-related subplot. 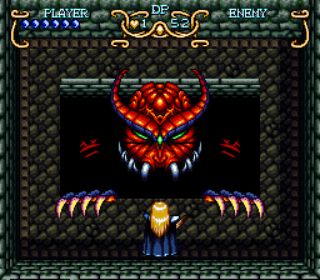 But that's not the "one glaring flaw" I mentioned earlier. That label gets tossed on the Japanese-to-English translation we Americans got when Illusion of Gaia was ported here. Most of the time, it's clunky and awkward, which dilutes the potential impact that an excellent game with a darker and more melancholy story should have. At its worst, it almost feels like someone was trying to sabotage the game or, at the least, simply didn't care one bit about what they were doing. At least that's the only explanation I can come up with for why a potentially touching moment was completely ruined by someone inserting a horrible "joke" based on a character's Shakespearian name. That bit of stupidity almost made me want to relive the (seemingly) 18 hours I spent with Will and Kara during an extremely long raft trip that was supposed to show how the two youngsters started to understand and develop feelings for each other, but just came off as an exercise in tedium.

Poor dialogue might keep this one from completely realizing its genius, but it's still a really good game. The dungeons deliver the same sort of addictive fun those in the classic Zelda games did, ensuring that I come back to this one every few years; while the action fits nicely into this "entertaining, but not particularly hard" zone where I have a lot of fun without fear of running into a seemingly-unstoppable juggernaut and getting frustrated by my inability to progress past it. Illusion of Gaia might not be a legendary or unforgettable title, but it is one that's well worth the time of anyone who likes this sort of game.

If you enjoyed this Illusion of Gaia review, you're encouraged to discuss it with the author and with other members of the site's community. If you don't already have an HonestGamers account, you can sign up for one in a snap. Thank you for reading!

© 1998 - 2022 HonestGamers
None of the material contained within this site may be reproduced in any conceivable fashion without permission from the author(s) of said material. This site is not sponsored or endorsed by Nintendo, Sega, Sony, Microsoft, or any other such party. Illusion of Gaia is a registered trademark of its copyright holder. This site makes no claim to Illusion of Gaia, its characters, screenshots, artwork, music, or any intellectual property contained within. Opinions expressed on this site do not necessarily represent the opinion of site staff or sponsors. Staff and freelance reviews are typically written based on time spent with a retail review copy or review key for the game that is provided by its publisher.