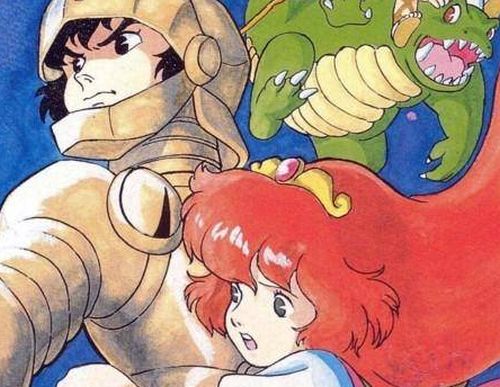 On a visit to my parents' abode, I decided to excavate the games I'd left behind from my old closet. I peered lovingly at them, remembering the great times I'd spent with each one. It was a fantastic moment for nostalgia that would have ended with my heart fluttering were it not for a certain miscreant. A cold hatred streamed through my veins as my hand came to rest on a squarish cartridge. I pulled the sinister cart from its tomb, breaking the seal I had put over it ages ago. King's Knight had been resurrected, along with the terrible memories associated with it.

I remembered well playing this trickster game as a kid. It presented itself as an RPG or a Zelda clone with a level-by-level structure, yet it turned out to be a scrolling shooter with scant RPG elements. It even featured an RPG-like storyline in which four heroes--Rayjack the knight, Kaliva the wizard, Barusa the monster, and Toby the thief--set off on a quest to rescue a princess from a dragon. Each character came with his own solo stage brimming with idiotically designed monsters and destructible environments that hid various powerups. Some such items increased HP, boosted speed, or upgraded attack power, and some even caused damage. Upon completion of a stage, each character gained a certain number of levels based on mysterious, and likely arbitrary, factors. All remaining heroes then converged on the dragon's lair for a final showdown that promised to be hackneyed epic.

Although it sounded like an interesting hybrid of shooter and RPG, the mix wasn't enough to hold my attention as a kid. Without the game's selling point to hold me in thrall, there was nothing to dull the stiff challenge I experienced. King's Knight rarely found its way into my NES as a result. A hefty challenge factor, though, was not a solid enough reason to despise a game. I realized then that I didn't even know why I reviled King's Knight so much. 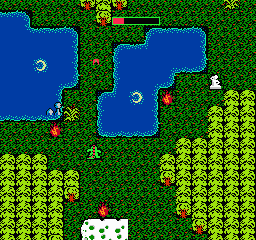 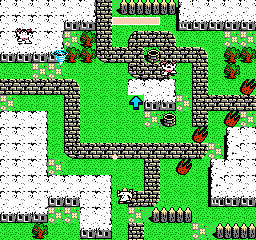 So I popped the cart in and powered up the gray beast. The preliminary fanfare boomed from my TV speakers, so inviting and charming that I was ready to dismiss my age-old hatred. I took control of Rayjack and commenced blasting flying witches and enormous disembodied noses. Together we also clobbered partially submerged zombies firing projectiles. With that menace surmounted, we came to a scene where monoliths sprouted up from the ground, forming a pathway. We followed it to a dead end and frantically tried to backtrack, but to no avail. There Rayjack died a cheap crushing death, a victim more of circumstance than challenge. In my mind, I could hear the game cackling. It had tricked me into playing it once again, and was ready to unleash a fresh batch of pain.

I shrugged the death off and played through as much of the adventure as I could stomach. All of the hollow hours I spent hammering away at this title were not without fruit, though. I learned that I was terrible at the game, but not nearly as terrible as the game was itself.

When I think of exemplary scrolling shooters, I think of fast-paced action titles with swarms of foes that follow distinct patterns requiring the utmost of your memory and dodging capabilities. In other words, King's Knight doesn't come to mind at all. For starters the game scrolls very slowly, so much that it's agonizing. The pace drops further when you take into account the destructible environments. Whole mountain ranges, deep forests, gigantic buildings, and miscellaneous debris clog up the screen, requiring you to shoot-shoot-shoot like there's no tomorrow in order to clear it all. The bulk of your shooting--that is, most of the game's action--is spent destroying inanimate objects rather than engaging in actual combat.

Not that the combat presented is noteworthy. Unlike superior shmups, creatures don't burst onto the scene, running recognizable patterns and raising all kinds of hell. Instead they mosey onto the screen, meandering about while shooting at you. Dealing with most of them isn't a problem, but dodging their bullets can be, especially when said bullets blend with the environment. For instance, you'll see a lot of green projectiles fired over grassy pastures, or blue projectiles cannoned over water. One of the worst cases of this phenomenon occurs in Kaliva's stage. You'll run afoul of anthropomorphs that resemble the Hawaiian Punch mascot, except naked. These guys toss tons of white projectiles over similarly white houses and pathways, making them difficult to dodge. Since Kaliva sports the lowest defense of the quartet, he dies with such ease that you could call it a talent. 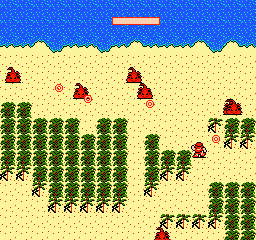 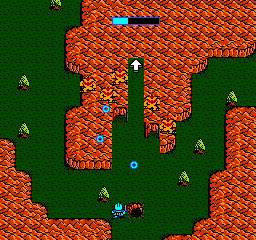 This isn't to say that King's Knight is impossible, though. Through constant retrying and swearing, I was able to complete two stages and access the grand finale. It's a hell of a challenge, highlighted by legions of flying goons and monstrous stone gargoyles with plenty of weaving around myriad bullets. None of these factors is as big of a damper on your quest as an old friend: monoliths. Unlike Rayjack's stage, there is no safe path through them. The only way to overcome this obstacle is with a certain monolith-destroying spell hidden in one of the stages. You can imagine how I felt finding this out, having gone so far into the game's climax only to die another cheap crushing death. Cue more cackling.

Thankfully you can save the game and maintain your characters' levels. You can even access a character select screen after saving and replay certain stages, allowing you nab any missed spells, boost your surviving characters' levels, and even resurrect the fallen. It's a neat little feature, one of the game's few strengths, but it doesn't soften the blow of its many shortcomings.

Each flaw bit into me, begging me to swear off my quest. Stubborn punk that I am, I refused and kept playing. All it took was one more mistake on the game's part to finally dissuade me from continuing any further. I found the monolith-destroying spell after hours of tedious environment destruction and took my two remaining warriors back to the final stage. After many frustrating failed attempts at dodging hailstorms of bullets and obliterating fell demons, I arrived at the final boss. There I found that the game had one last cheap trick to unload. In order to defeat the dragon, all four characters must be present. Otherwise, a player is destined for failure.

I turned the game off after discovering that, took it out of my NES, and promptly dropped it into a box of items headed to Goodwill in the morning. So it came to pass that evil had been vanquished via the awesome power of charitable donation.

Never again shall I challenge this broken shooter. King's Knight would have been a better game if the developers at Square had put more thought into it. Many of the game's elements work against each other, creating a clunky, tedious, frustrating slog through a cliche fantasy world. No thank you, I prefer my RPGs and shooters to inhabit separate worlds.
1.5/5

If you enjoyed this King's Knight review, you're encouraged to discuss it with the author and with other members of the site's community. If you don't already have an HonestGamers account, you can sign up for one in a snap. Thank you for reading!

© 1998-2021 HonestGamers
None of the material contained within this site may be reproduced in any conceivable fashion without permission from the author(s) of said material. This site is not sponsored or endorsed by Nintendo, Sega, Sony, Microsoft, or any other such party. King's Knight is a registered trademark of its copyright holder. This site makes no claim to King's Knight, its characters, screenshots, artwork, music, or any intellectual property contained within. Opinions expressed on this site do not necessarily represent the opinion of site staff or sponsors. Staff and freelance reviews are typically written based on time spent with a retail review copy or review key for the game that is provided by its publisher.