Nearly three decades ago at Taito's headquarters, I like to imagine, developers hatched a brilliant plot to create the ultimate platformer: Power Blade. In order to concoct such a masterpiece, they needed to know what made the genre tick. They therefore examined contemporary platformers, paying special attention to their strengths and shortcomings. After careful consideration, they selected premium genre elements and brought them together in an amalgamation of awesomeness. They had hoped their labor would yield the king of platformers.

Despite its regality, the game only required a simple tale and a dire setting. Power Blade took gamers to a worldwide paradise where all of society's functions were performed by an enormous master computer. Everything was going well enough until a fleet of alien terrorists seized the computer, effectively putting all of civilization at their mercy. Robots soon overran each of six neighboring security compounds, barring access to the central mainframe and cementing the aliens' place as the newly crowned overlords.

To combat the extraterrestrial nemeses, Earth needed a macho badass, the kind of rugged tough guy who lifts weights while eating bacon and watching monster truck rallies, who takes his coffee scalding hot and black as midnight. Enter Nova, a man's man with a '90s flattop, dark sunglasses, and a black tank top for extra manly effect. He's the last person any mechanical menace or space terrorist would want to find in a dark alley (or a well-lit one, for that matter).

Nova appears to have been hitting the gym since the age of seven, and his rigorous training has granted him supreme strength and top-notch agility. With this amazing athleticism, he is able to gracefully navigate each intricately designed stage. Each new scene presents a different platforming situation or obstacle to overcome, from acid pools to moving platforms high in the sky. You'll guide Nova as he battles through closed quarters packed with robotic sentries and exercises caution while climbing guarded ladders, all in an effort to access each stage's computer room.

Breaking into all six CPU chambers is not a simple matter of finding a door and waltzing in, however; all of the ingresses are locked and entry requires an ID card that is held by a hidden contact in each stage. This leaves Nova with the task of searching every nook and cranny within a complex before giving the stage boss the beating of its life. Only then can he disarm one of the locks preventing entry to the mainframe, only to begin the process anew with different impediments to conquer. 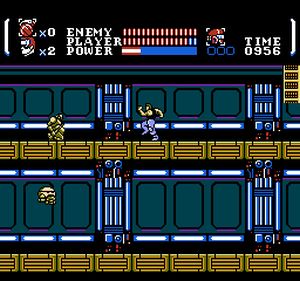 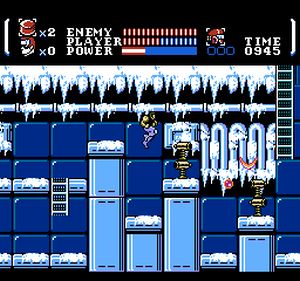 Nova is more than capable of bounding over every hurtle--be it a tricky jump or a tough adversary--that Taito has placed before him. Even the most odious of gaps and monstrous of foes are child's play thanks to the man's spryness and power. The developers have blessed the warrior with tight play control and spot-on response, allowing him to spring over distant gaps with ease and devastate suckers with deadly accuracy. Nova doesn't fly back when damaged, either, which handily eliminates the frustration that could have otherwise resulted in situations where he must surmount multiple platforms while avoiding flying creatures.

Not that those creatures or any other group pose much of a threat. Nova comes equipped with a real man's weapon: a giant boomerang. He can wield this simple device like no other, throwing it in all eight directions, even while airborne. Within seconds, he can reduce robotic frames to scrap metal, then nab various power-ups to increase his weapon's strength, range, and multitude. With full upgrades, Nova can throw three high-powered boomerangs to the edge of the screen simultaneously, easily decimating robot forces without a second thought.

An overpowered main weapon wasn't enough, though. In each stage, there rests a suit of power armor that allows Nova to utilize the game's namesake. Unlike the boomerang, the Power Blade can cut through obstacles and walls and annihilate most enemies with a single shot. With this puppy, no opponent stands a ghost of a chance against Nova.

Nor are any of them expected to, because Power Blade and Nova are both perfect. Too perfect, in fact. 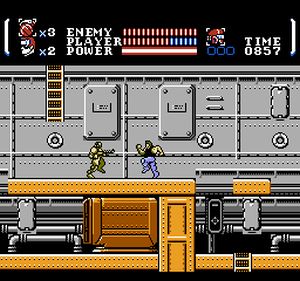 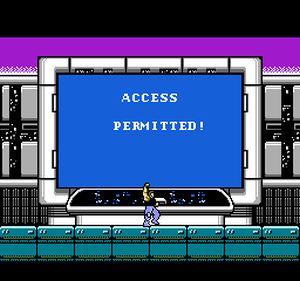 Consider all that I've written above and ask yourself, "Does any of this sound genuinely entertaining?" I don't see players reveling in the excitement as they trample an army of outclassed automatons, destroying many foes before they can even land a single blow. It doesn't help that many opponents only take a boomerang hit or two before they drop, eliminating the need to pay any attention to elements such as enemy placement and movement patterns. The situation only worsens when you secure a power suit, which turns any level into a massive abattoir. Thanks to the god complex that weapon upgrades like the power suit might give you, 90% of the games potential challenge is rendered null and void. Where's the entertainment in that?

Without tough combat, the burden of challenge rests entirely on platforming segments. This is unfortunate, since the platforming aspect fails to impress. Thanks to Nova's flawless movement, you'll have no trouble at all overcoming most of the pitfalls. Many of them are the same basic gaps found in nearly every platformer. Few are tricky, and even those that are still aren't terribly interesting. A few spacious pits and some appearing/disappearing blocks comprise Power Blade's toughest platforming challenges, and those require little skill to complete. Taito should have realized that there's a reason some platformers are slippery or include knock-back when a character is hit. Such factors can make simple setups quite tricky.

Unique features might have assuaged the boredom brought on by the lacking difficulty, but almost everything about Power Blade is borrowed. The one example everyone cites is the stage select ability similar to Mega Man, although the copycat issues run deeper than this. Whole setpieces from other titles make appearances. One scene, for instance, has you hopping over pools of acid while dodging projectiles fired by fish monsters. Castlevania, anyone?

In addition to such setpieces, you'll also run afoul of familiar foes, especially goons you may recognize from Castlevania. You'll spot cameos from Medusa-heads in the form of tiny machines flying in wavelike patterns. Blood skeletons also drop in, appearing as androids that crumble when hit and reassemble shortly afterward. It might sound like a nostalgia trip revisiting these characters and setpieces, but the lack of difficulty sucks any enjoyment out of reliving them. It's akin to listening to the greatest hits of a music genre played by a mediocre cover band.

In a way, it's like Power Blade parodies itself. It spins a yarn in which humanity presumed to create a perfect society by surrendering worldwide sovereignty to an artificial intelligence. Somehow the entire world overlooked a flaw in their design, and the very entity that maintained absolute order ironically plunged the world into chaos. Power Blade itself is not much different from that scenario. It tried to address issues common to many platformers while providing players with elements they loved in other titles. What seemed like the formula for a perfect platformer was actually the game's undoing. Power Blade is an average, unoriginal title that's far too easy to entertain most fans of its own genre. Not that they'll lose any sleep over this, what with dozens of superior titles to choose from available on several platforms.

If you enjoyed this Power Blade review, you're encouraged to discuss it with the author and with other members of the site's community. If you don't already have an HonestGamers account, you can sign up for one in a snap. Thank you for reading!

© 1998-2022 HonestGamers
None of the material contained within this site may be reproduced in any conceivable fashion without permission from the author(s) of said material. This site is not sponsored or endorsed by Nintendo, Sega, Sony, Microsoft, or any other such party. Power Blade is a registered trademark of its copyright holder. This site makes no claim to Power Blade, its characters, screenshots, artwork, music, or any intellectual property contained within. Opinions expressed on this site do not necessarily represent the opinion of site staff or sponsors. Staff and freelance reviews are typically written based on time spent with a retail review copy or review key for the game that is provided by its publisher.