Legasista was originally released as a proper retail title in Japan, but a few months later its available there and in other regions as a download-only game. Thats a more appropriate means of distribution for a game of this sort, if you ask me. Developed by System Prisma, a studio best known previously for its work on the Cladun games, Legasista is a dungeon crawler with some real issues.

You play as Alto and a selection of friends that youll meet or create. His sister Mari has been turned into a crystal and Alto is determined to restore her to her previous form. That effort brings him to a mysterious tower, where he meets a helpful host who he comes to call Mrs. Dungeon. She assists him as he works through the tower in search of a mysterious relic with the power to undo the curse on his sister. 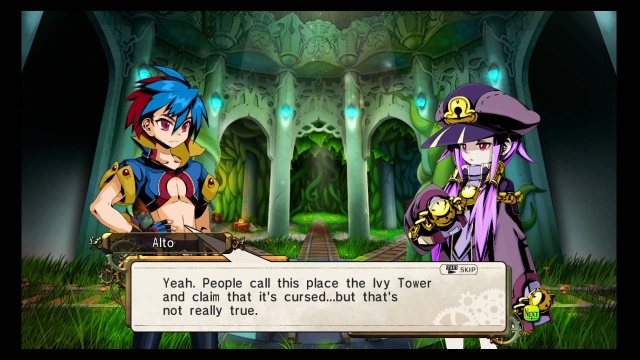 Almost immediately after venturing into the tower, Alto meets Melize. She appears to be the relic he sought, a living robot that oozes magical power, but shes not exactly friendly and she tries to destroy him upon sight. Fortunately, her memory is wiped before she can complete the job. By the end of a surprising series of developments, she has become Altos unlikely ally. Together, the two companions will climb the tower in search of memory chips that bring back the various abilities Melize has lost. Those restored powers may eventually allow her to save Altos sister, if they dont turn her back into his worst nightmare first.

Legasistas plot is one of the games highlights. The story is doled out in small chunks as you complete various dungeon areas. Theres a lot of spoken dialogue, all of it voiced in Japanese, but the English subtitles are up to NIS Americas high standards. The presentation is familiar, but theres some interesting mythology at play and each new narrative twist is interesting enough that youll probably want to keep playing just to learn more about this unusual world. Anime-inspired fare along these lines has admittedly been crafted many times before, and we can doubtless look forward to seeing a great deal more of it in the future, but at least here there are a few genuine surprises.

When youre not advancing the plot, youll spend a lot of your time in random dungeons. Those dungeons are really the heart of the game, much like the Item World is in Nippon Ichi Softwares own Disgaea series. They come in several tiers, and you can choose which one you want right from the start by digging a hole in the hub area that serves as the dungeon entrance. When youre first starting out, youll need to find a 30-floor area with weak foes, but puny adversaries dont yield many experience points. As you gain strength, you can check out more advanced environments that consist of as many as 100 floors. 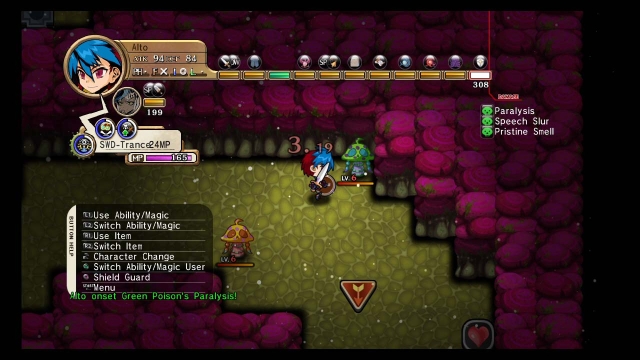 While the idea of an endless supply of random dungeons is attractive, Legasista manages to mess things up in a number of ways. For starters, you can only exit the dungeon if you find an exit portal or if you reach the end. The number of exit portals available depends on the dungeon difficulty. On the easiest setting, youll find numerous portals. Sometimes, youll run across them every floor or two. In the more advanced dungeons, however, youll encounter them only infrequently. Instead, you only have a choice about how you advance to the next floor. A variety of gates is placed at random (often in a close cluster somewhere on a given floor) and the one you choose determines your experience on any remaining floors during that particular run.

Each gate takes you to a bonus screen. On these screens, you press a button to stop flashing numbers that will determine whether or not your enemies gain levels and also affect the item drop rate. You may also receive rewards, such as a magic meter or HP refill. The exact rewards vary, depending on the gate. Therefore, it pays to look for the Angel Gates, which seldom have any negative impact at all. Or you might hope to find a Rainbow Gate, which can let you skip a handful of floors. However, a number of gates cause significant enemy growth. Pass through a Hell Gate (either purposefully or on accident) and you might go from battling enemies at level 13 on one floor to 233 on the next. Worse, some gates will occasionally turn into hell Hell Gates once you pass through them--if your luck is particularly bad--so theres potential for disaster all around. This holds true even if youre in the simplest of dungeons.

When a floor is suddenly populated by powerful enemies, exploring is suddenly a dangerous business. Any enemy might be able to take out your character with one hit, or you might run into a group of smaller foes that are all but invincible and they could surround you. That by itself is frustrating, but you such instances are made worse by the fact that you dont get to keep any awesome loot that you find if all three of your available characters perish. So you can run into cases where you amass a pile of treasure and youre frantically searching for an exit portal, but all you can find are more gates that buff your foes even further. Its frustrating. 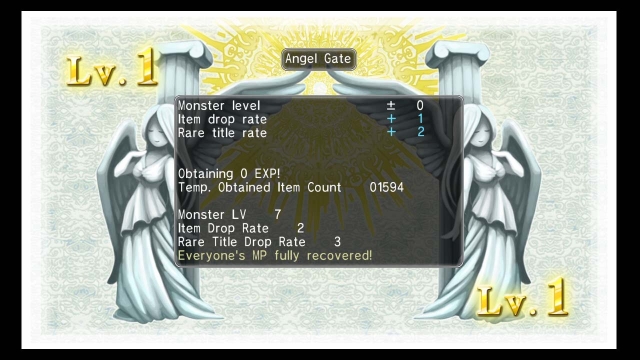 The story-based dungeons are a different matter. Most of them consist of only one floor, and there are no random side effects even in cases where you have to explore multiple floors. When things do finally get more difficult as you work through the plot, its because there are new elements such as timed switches or invincible enemies that slowly float after you and try to kill you before you can flip every switch and open every locked door that lies between you and the exit. However, they wind up feeling routine and the available loot is usually disappointing. If not for the story segments that you can enjoy as you advance through the more standard dungeons, there wouldnt really be much reason to touch them at all.

Legasista has more to offer than just random dungeons, though. It also features surprisingly complex options where character customization is concerned. Characters can by default equip several pieces of equipment, depending on their current class. There are several classes, and you can only change to a new class once you have advanced to level 20 in the previous class. As you do that, you can switch freely between classes and level them all up, spending ability points that you learn along the way to add mana points and bonus attributes. The mana points are in turn assigned to each available equipment slot, allowing you to place more powerful gear on those slots. In additions to weapons, armor and spells, you can equip charms that improve attack power or defense, or you can sometimes add a shield or bow to the mix. Then when you explore dungeons, youll find that each piece of gear has a durability rating. If you take a hit from your front, youll lose energy from an HP bar, while hits to the side chip away at your gear and can even disable it until you head back to the level hub. This mechanic means that its quite possible to lose access to your weapon, or to quickly burn through all your armor and find yourself left defenseless if enemies gang up on you from the sides. Sometimes, youll try to open a treasure chest and find that it is actually a mimic monster that demolishes your defenses in a matter of a second or two.

I apologize for all the technical talk, but Legasista is very much a technical game. I havent even touched on the variety of frames you can use to affect which equipment a character can wear just within a single class, or the titles for equipment that can imbue it with special abilities and affect mana requirements. I also havent discussed the various traps that can work against you if you try to move too quickly in a given area, or the custom character creator (which lets you create characters using assets from a flash drive or what have you). The game truly has more complexity than it needs. The result is undeniably a deep game, but that isnt always as good as it could be. 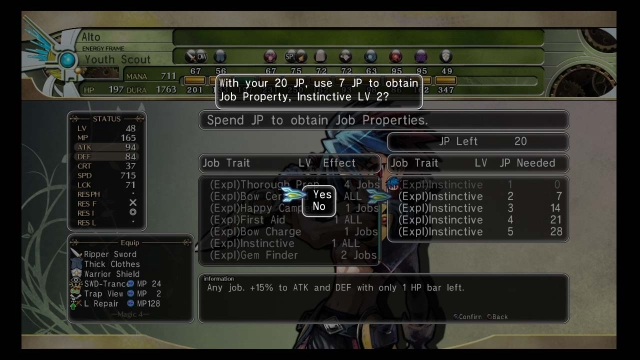 If youre a fan of the dungeon crawler, I do recommend Legasista in spite of the negative issues I noted above. The mountain of complexity does work to produce a memorable and frequently involving game. However, that very real strength is at the same time the games biggest weakness. For genre newcomers and the easily frustrated, Legasista will likely come across as just plain bad. Theres more to the game than any negative first impressions indicate, though. You just have to dig for it.

If you enjoyed this Legasista review, you're encouraged to discuss it with the author and with other members of the site's community. If you don't already have an HonestGamers account, you can sign up for one in a snap. Thank you for reading!

© 1998-2021 HonestGamers
None of the material contained within this site may be reproduced in any conceivable fashion without permission from the author(s) of said material. This site is not sponsored or endorsed by Nintendo, Sega, Sony, Microsoft, or any other such party. Legasista is a registered trademark of its copyright holder. This site makes no claim to Legasista, its characters, screenshots, artwork, music, or any intellectual property contained within. Opinions expressed on this site do not necessarily represent the opinion of site staff or sponsors. Staff and freelance reviews are typically written based on time spent with a retail review copy or review key for the game that is provided by its publisher.