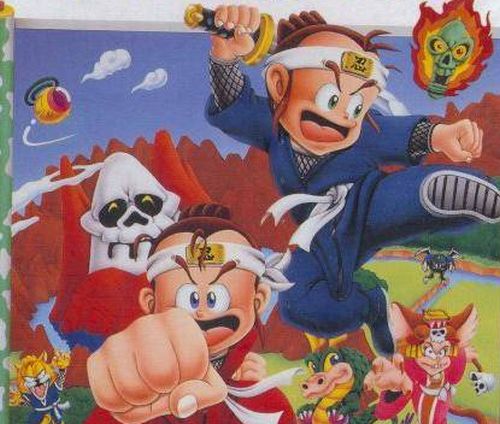 It's not difficult to enjoy Little Ninja Brothers. In the game, you assume the role of a miniature ninja. You start your adventure by leaving behind the safety of your master's dojo to journey to a nearby town. Upon arriving at your destination, youll find a variety of familiar RPG haunts rendered in 8-bit and stylized after feudal Japan, rather than medieval Europe. Then, after letting out a few pleased sighs because all is right with the world, you can purchase some provisions and embark on your journey.

As a long-time RPG fanatic, I found that the games design grabbed my attention immediately. I jumped into it faster than a frat boy into a swimming pool full of beer. It wasnt until I stepped onto the world map that the game revealed its ability to twist familiar elements so that they offer a unique experience.

There are random encounters, for instance, but they dont appear in the manner you might expect. Battles take place in real time on various battlefields. Basic stones serve as obstructions and ponds act as HP-draining traps. While negotiating such hazards, you must deliver knuckle sandwiches of justice to unruly beasts and wicked ninjas. Killing isn't as easy as hitting a button, though; each enemy has a certain spot you need to hit in order to deal damage, which can present a problem until you find that weakness. Then fights with that particular foe are a breeze.

It's common to suffer a whoopin' after your first encounter. You'll know right away that you'll need to grind like crazy, but that shouldnt bother you one bit. Battles are so fast-paced and entertaining that you may even start to look forward to them. I actually had a great time just wandering around the first town, punching things to death, building experience, staying at the inn, and leveling up.

Venturing further afield, you'll discover newer and meaner beasts that employ cheaper tactics. Some of them have extendable weapons or projectiles, while others jump incessantly and crowd the screen. The worst foes are those that are immune to your punch. Over the course of numerous battles, though, you'll train like a real ninja and learn new tactics to more efficiently vanquish such adversaries. You'll soon discover that jumping on enemies inflicts damage (and is sometimes the only way to do so). Punching rocks can provide you with throwing stars and special kick attacks that defeat enemies from afar. Collect enough Ms from rocks and you'll gain a special attack that can clear an entire screen. 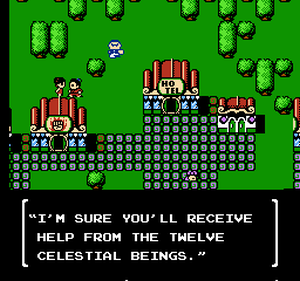 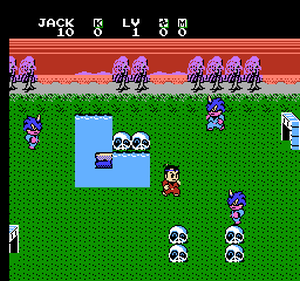 RPGs usually become easier as you gain levels. As your stats increase, you can take out enemies faster while sustaining less damage. Little Ninja Brothers adheres to the former part of that statement, but not the latter. That's right: there is no defense stat. Enemies deal the same amount of damage to you regardless of your level. Besides attack power, the only stat that increases with each level is HP, and the gains in that department are slow going. While some levels grant you an additional 10 to 30 HP, most of them award you with only 3 to 5. Towards the end of the game, you'll grind for hours against cheap enemies that deal loads damage, all for slim returns. You can purchase shields and robes, but those don't increase defense, per se. Rather, they decrease the amount of damage caused by specific enemies. The game neglects to grant you protection from tougher baddies like giant metal gargoyles and dragons, both of which will rip your face off regularly.

This wouldn't be such a problem, but the game raises its difficulty by making enemies cheaper. Dragons tend to be the biggest offender. They move swiftly and erratically, making them difficult to dodge and ensuring that youll have a hard time hitting them without taking damage. If a dragon strikes you once, you won't have enough time to respond before it does so again and again and again... You'll find yourself at the Game Over screen within a few seconds, your interest waning as the number of cheap deaths mounts. Dying isn't a big deal in the early going, but later on it becomes a pain. This is the case especially when you have to travel long distances. Getting to the final dungeon, for instance, requires you to walk across two different large parts of the world map and traverse two other dungeons, all while fighting random encounters. If you die on the way to the final boss, you'll have to travel back along the whole bloody path again.

Bear in mind that there are no healing spells, either. You can purchase healing items in two varieties: sweet bun and meat bun. You can hold up to eight sweet buns, but they only restore forty HP. After you get about halfway through the game, such a small HP increase is hardly worth noticing. You can use a meat bun, which heals you fully, but you can only carry one of those at a time. It really wouldn't have hurt to include a couple more healing items. If anything, I would see it as an open invitation to keep playing and enjoying the game.

Dungeons could have livened up the experience, but here they do more harm than good. Most early dungeons are dull, straightforward areas and rely too heavily on random encounters as a means of increasing their longevity. The labyrinths youll encounter later on, in contrast, are convoluted and don't reward you for exploring. There are no items to find, treasure chests to open, or special events to witness within any of the dungeons. More than anything, the game punishes you for exploring by forcing you into an excessive number of battles that wear you down before you can attempt to vanquish a killer boss.

Most boss battles aren't fought in real time, but instead employ the more standard turn-based combat. So that's where that familiar mechanic was hiding! Against bosses, the turn-based system actually works and makes for stand out boss battles. They feel important, even epic. However, such a system becomes old once you start to encounter it more regularly. There are some dungeons where you battle even the more standard enemies in turn-based combat, and the repetition hampers the experience. Your characters miss more often than they hit, dragging battles out much longer than necessary. Such delays become so bothersome that you'll wind up running from most turn-based battles just so you don't take an hour to get through a basic dungeon. 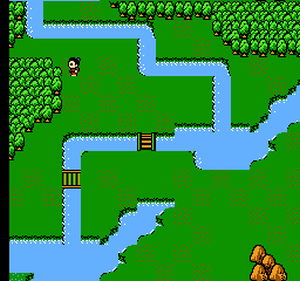 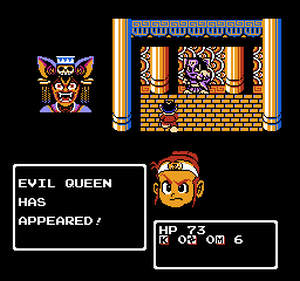 Despite all of my ranting, the game is not impossible. It can be irritating at times, yes, but its still quite doable. The more you play it, the better you get. You'll find yourself winning against some amazing odds, and such moments are definitely rewarding. The game is also helped by the presence of a two-player mode, which helps to reduce the difficulty.

Little Ninja Brothers represents a brave attempt at innovation, something seldom seen in old school RPGs. However, it suffered for its innovation. The lack of a defense is a huge strike against the game. When that deficiency is combined with cheap enemies and lackluster healing capabilities in the later chapters, the game becomes more frustrating than fun. As a whole, though, the games positive aspects do outweigh the negative ones. The real-time battle system is so addictive (even when figuratively it removes your still-beating heart and feeds it to you) that occasional shortcomings can be overlooked. Little Ninja Brothers could have been truly legendary with just a few slight tweaks. Instead, it must settle for obscurity.

If you enjoyed this Little Ninja Brothers review, you're encouraged to discuss it with the author and with other members of the site's community. If you don't already have an HonestGamers account, you can sign up for one in a snap. Thank you for reading!

© 1998 - 2023 HonestGamers
None of the material contained within this site may be reproduced in any conceivable fashion without permission from the author(s) of said material. This site is not sponsored or endorsed by Nintendo, Sega, Sony, Microsoft, or any other such party. Little Ninja Brothers is a registered trademark of its copyright holder. This site makes no claim to Little Ninja Brothers, its characters, screenshots, artwork, music, or any intellectual property contained within. Opinions expressed on this site do not necessarily represent the opinion of site staff or sponsors. Staff and freelance reviews are typically written based on time spent with a retail review copy or review key for the game that is provided by its publisher.