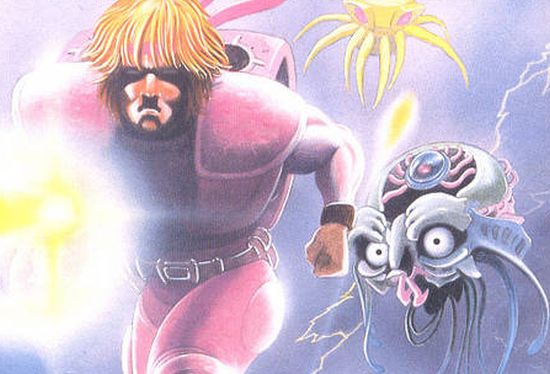 Society has crumbled. Those who survived evacuated the planet, and those who remained were consumed. They disappeared along with every building and piece of machinery. Nothing was blown to bits or burnt to the ground, but everything lies in the grasp of a cancerous alien presence. A vile substance inches its way across the land, and from it spring horrific monstrosities and robotic menaces. Humanity has given up the planet Pan and moved away, yet one soul remains. Max Maverick, armed with a mere laser pistol, has stayed behind. He knows he'll probably die, he knows he's wearing pink armor, and he doesn't care. That's how Max rolls.

Developer Kid wanted our experience with Isolated Warrior to be special. They stayed away from ordinary and expected genres. There were plenty of run 'n guns and side-scrollers around, and it would be easy for such a small release to become lost amidst a sea of familiarity. They leaned toward making a shmup, but even that wasn't enough. What they eventually decided on was an isometric shmup, a rarely seen and very difficult kind of game to craft effectively.

The first two stages showcase great shooting scenes as mechanical menaces fly at you in formations, tossing a hailstorm of bullets your way. You can take out most of these minor league creatures with a quantum of skill, but they are the least of your worries. Newer and stranger creations appear as you advance, each with its own pattern. Some fly a tight rail or in a straight line, even to their deaths. Others sport more erratic motions. About halfway through the first stage are creatures that look like chunks of meat with tentacles. They take several hits to fell, but the worst thing about them is that they love to wander about the screen. Allow them to linger too long and they might even run around to your backside and give you a little chase.

The parade of horrific sprites never ceases. Just when you think you've seen everything a twisted developer can throw at you, new monstrosities claw their way out of the ground and phase right in front of you. Phallic stationary fusions of monster and machine lob projectiles at you in the second stage, set on a river, while aberrant fish leap with razor teeth leap from the waters. Creatures burst from giant eggs stuck to the floor a la Aliens, and skull-like terrors attempt to run you off your motorcycle in stage four. Each new being you meet is more vile than the last, and with each level they become more vicious and difficult to deal with. 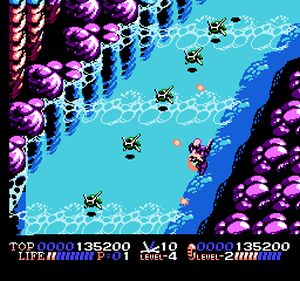 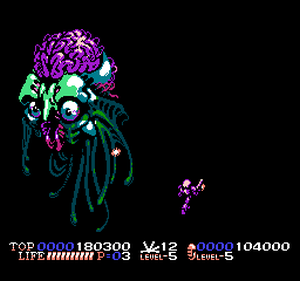 There are a few nemeses that are pretty cheap. Some fly into your blind spots and sit where you cannot fire. Others sneak up behind you, but are avoidable as long as you commit their presence to memory. A few of them, however, are a complete pain in the ass to deal with. The third stage features a mid-boss that dumps a living substance on various points of the ground. Worse yet, it likes to get behind you and stay there for decent chunk of time. Laser blasts are no good if you cannot aim at the beast, and specialty bombs are finite. The only way to deal with it is hope you arrive with a highly upgraded weapon. Then you can finish the thing off before it poses a real threat.

Upgrading is essential, sometimes even heavily relied on. Certain enemies drop helpful power ups that boost your speed, level up your bombs, and grant insane weapon upgrades. Your average laser becomes faster and stronger, and can even reflect off the edge of the screen and nail enemies behind you. Grabbing a W-labeled upgrade adds diagonal shots to your weapon, allowing you to take out enemies in peculiar angles with grace. Fully power up your weapon and can cover the battlefield in wave after wave of rapid shots. Turnabout is fair play.

The action is magnificent, and the challenge is rough. Isolated Warrior will shatter your skull more times than you would care to count, but also provide you with not only infinite continues, but passwords. Wait, what? A shmup with passwords? It all sounds like a sweet deal.

Right about now, I'd write a closing paragraph and give the game a 9/10. Kid decided that having one of the few effective isometric shooters wasn't enough. I'm guessing people who have played the game are wondering why I haven't mentioned one of the game's key features yet. It's because I wanted emphasize how great game would be without it.

By tapping 'A', you can make Max jump. At first I thought this would add depth to the game. It came handy as I jumped over enemies and projectiles that came in veritable clouds. Around level three, the game begins to rely on it more than it should. There are several parts of the level where the swarm of enemies and projectiles is so dense that you cannot possibly cut through it all by just shooting. At one point, you have to weave around bits of corrupted floor, moving right and left. Enemies will appear at your sides through most of this, and you won't be able shoot them unless you have an upgraded weapon. Unless you're a shmup ace, you likely won't have one at this point, as the game is tough as nails. It forces you to jump repeatedly to survive this scene.

It's not a lone case, either. From then on, jumping becomes a huge part of survival. It wouldn't be so bad except that I like my shoot 'em ups with plenty of shooting and not so much jumping. At some points, even having a fully upgraded weapon won't save you. You'll inch along narrow walkways and jump over scores of bullets, all while trying to take out a vast number of aliens oozing onto the screen. I recall whole scenes full of enemies that I was itching to shoot, but had to jump over everything because the area and the amount of bullets would not allow it. It was either jump or take the brunt of the bullets coming at me. 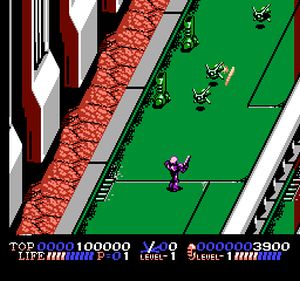 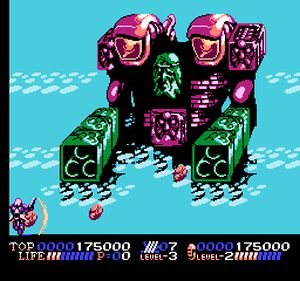 Worse yet is when you have to jump over pitfalls or perils. Max can only travel about halfway up the path before an intangible force stops him. This makes it incredibly hard to gauge when you need to jump. You'll go for a jump over a pitfall, only to be stopped by an invisible wall and fall short of land. It takes a long time to figure out when to jump. I should never have to say that a concept as simple as jumping "takes some getting used to." In a platformer, jumping should be intuitive. It should become second nature within the first few minutes of playing, and shouldn't be something you need to take several deaths to get a feel for.

There are a good number of jumps with enemies placed right on the platform. Some of them can be taken out with your weaponry. Others, though, are placed such that even your fully upgraded weapon cannot reach them. In a case like that, your options are to jump headlong into the enemy and accept a little life loss--and since you get very little life, avoiding damage is very important--or try to leap right next to it. The jumping mechanics are a little loose, so precision jumping is not as easy as over-correcting and missing your target. I can stand a gracious amount of challenge. What I can't abide is challenge generated by broken gaming elements.

Isolated Warrior always leaves me with a heavy heart. It's a great game unfortunately trapped within a decent game. Had Kid left the platformer elements out, it would have been excellent. I can admire their desire for innovation, but innovation is not inherently a good quality. Let's say I develop a sweet boxing game, but then decide it's not enough because there are a lot of sweet boxing games. So I toss in random encounters that happen while you're boxing. Your character will punch the crap out of slimes and goblins and gain levels which will aid him in his match. Between rounds, he can use the gold coins to purchase better gloves that increase his attack power, or improved shorts that up his stamina. Yeah, I've just created a boxing RPG, and likely a godawful one. With inventive titles, we always have to ask: was there any merit in this innovation?

If you enjoyed this Isolated Warrior review, you're encouraged to discuss it with the author and with other members of the site's community. If you don't already have an HonestGamers account, you can sign up for one in a snap. Thank you for reading!

© 1998-2021 HonestGamers
None of the material contained within this site may be reproduced in any conceivable fashion without permission from the author(s) of said material. This site is not sponsored or endorsed by Nintendo, Sega, Sony, Microsoft, or any other such party. Isolated Warrior is a registered trademark of its copyright holder. This site makes no claim to Isolated Warrior, its characters, screenshots, artwork, music, or any intellectual property contained within. Opinions expressed on this site do not necessarily represent the opinion of site staff or sponsors. Staff and freelance reviews are typically written based on time spent with a retail review copy or review key for the game that is provided by its publisher.