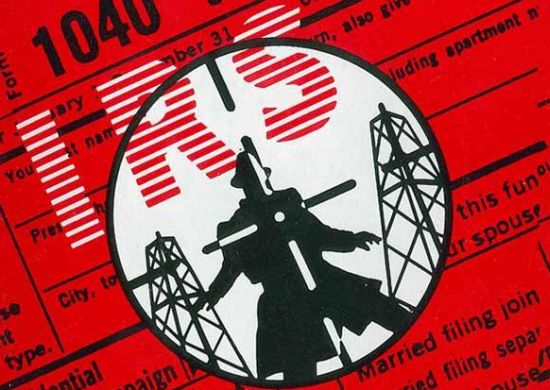 Tax Avoiders is a rule breaker. It's an Atari 2600 game that doesn't involve shooting, cute animals, or silly antics (or silly antics where you shoot cute animals). It's not the kind of 2600 game you can pick up and play without examining the manual. Delving into it without one is a surreal experience where you nab flashing dollar signs, ride invisible elevators, arbitrarily increase or decrease your score by obtaining various items, and outrun a color-changing man with a fedora. It may not be a magical or insane world, per se, but it certainly isn't self-explanatory.

I didn't "get" this game as a kid. It was adult stuff. All I knew was I needed to collect things that look useful and avoid the bad man. I didn't know anything about investments and taxes and CPAs. As I grew up and began to learn more about economics and finances, I began to appreciate the game. It took a boring adult idea like making money through investments and turned it into an arcade-style romp.

Our protagonist is the not-so-subtly named John Q who is on a mission to make a million in a year. He first has to earn the money necessary to make investments. We could follow John around at his dull job where he probably spends his time trying to look productive, drinking a lot of decaf, suppressing his inevitable mid-life crisis, and failing miserably to score points with the cute new secretary. Instead, developers Dunhill Electronics converted this mundane process into a basic platformer. Here we guide John as he collects money while avoiding cash-devouring red tape monsters. This process last a few months--a couple minutes of our time.

You'll be thankful to get away from the work screen, as it's the boring part of the game. I guess in that aspect it really is true to life. Unfortunately, we're here to play and not work. It's difficult to find entertainment in a screen that consists of four basic floors with an elevator in the middle, where all that's asked of you is basic collecting and dodging. Dollar signs and monsters appear in the same positions each time, so the senses of wonder and surprise diminish after your first work screen. You'll eventually work out a rhythm to grabbing everything, and the screen becomes a mindless chore. 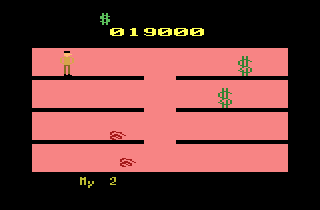 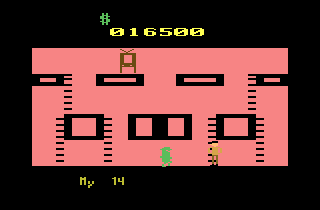 There is no transition when the work screen ends. One second you're jumping over a red tape monster and landing on some cash, the next second you're standing in a room next to a sun with a chubby black creeper chasing after you. Tax evasion in every day life is not very exciting. It mostly consists of people not filling out paperwork, not answering phone calls, not responding to knocks on the door, and keeping a low profile. It isn't something you can turn into an enthralling game very easily, which is why Dunhill once again invoked the spirit of arcade. Slapping together a series of floating platforms and ladders, they created the investment screen. Here you snag an investment, file it in your portfolio (represented by a briefcase you must grab), and hope the numbers at the top of the screen increase. If not, you can always end your investment by running into the hat-wearing maniac when he changes color. Each color signifies a different character for you to either avoid or run into. Black is the IRS agent, which you want to avoid at all costs; pink denotes a crooked CPA, who will end your investment and gladly accept a $1000 donation to keep quiet about your tax evasion; and green is your investment adviser, a man who will change your investment without royally screwing you over.

Dodging the IRS may not play out with the same level of tension as avoiding ghosts in Pac-Man, but it can be tense. It's here I learned to love the game's slightly stiff controls. I remember sessions where I just couldn't grip a ladder, and that moment of lost time was enough for the IRS agent to catch up. I would panic and fail to find the rungs again and again as the agent drew closer. I think I may have even wet myself a few times. It's those moments of tension that keep the game above average overall.

Apart from dodging the agency, the best way to make money is through investment, yet there's no rhyme or reason as to which investment will mature properly and which will go south. I suppose that concept is true to life as well, but we aren't talking about real life here. Making a million doesn't require a great amount of skill or intellect. It's all luck. You have to hope that the investments you grab increase your cash flow more often than not. Any time spent with a bad investment, even a little time, can hamper your chances of succeeding.

When you think about it, Tax Avoiders, albeit unique and interesting, isn't a great game. Dunhill did a great job of adapting a piece of every day life into an arcade game, but they left too much of the game to chance. If there were a way to know which investments were wiser at various points in time, include more brainpower to the equation than simple guess and pray, then this game would have been brilliant. All it took to harm the game's greatness was one small misstep.

Regardless, Tax Avoiders should be on any Atari 2600 enthusiast's list of games to check out. It's not a major blast to play, nor is it addictive, but it is an original and challenging title with a bit of tension tossed in for good measure. Dunhill should be recognized for giving us an early example of thinking outside the norm. Just think of it as a the granddaddy of unique obscure games, at least that's the way I like to remember it.

If you enjoyed this Tax Avoiders review, you're encouraged to discuss it with the author and with other members of the site's community. If you don't already have an HonestGamers account, you can sign up for one in a snap. Thank you for reading!

© 1998-2021 HonestGamers
None of the material contained within this site may be reproduced in any conceivable fashion without permission from the author(s) of said material. This site is not sponsored or endorsed by Nintendo, Sega, Sony, Microsoft, or any other such party. Tax Avoiders is a registered trademark of its copyright holder. This site makes no claim to Tax Avoiders, its characters, screenshots, artwork, music, or any intellectual property contained within. Opinions expressed on this site do not necessarily represent the opinion of site staff or sponsors. Staff and freelance reviews are typically written based on time spent with a retail review copy or review key for the game that is provided by its publisher.