I'm not that great at Trials Evolution -- at least not yet. This saddens me. I'm missing out on a lot due to my inability to clear B-license level courses without faulting a dozen or three times. And that really long track with very few checkpoints that's right before the A-licenseyeah, right. I'll be happy if I can just complete that sucker, let alone do it flawlessly or something crazy like that!

But I'll keep trying. Hell, I can't stop trying. If I wasn't sitting in front of a computer typing this review, I'd be working on it at this moment. While you're reading this, odds are that I'm desperately attempting to keep my bike upright, knowing that a catastrophe is inevitable. This game will do that to you. It'll make you try tracks over and over and over again, looking to make it the distance without crashing. To accomplish those jumps just a bit more smoothly to lower your time. You'll mutter (or scream) obscenities at your TV, you'll drop the controller and storm into another room to cool off, you'll swear you've had enough and it's time to play something else. And then you'll try again.

RedLynx gets it. They turned a simple, fun experience into something amazing. When I started playing this game, I was prepared to be disappointed. In its multitude of courses, all you do is press buttons to hit the gas or brakes, while moving the control stick to the left and right, so your biker leans in one direction or another. The best comparison to the courses I could come up with were the tougher license tests in the Gran Turismo games -- we're talking the ones where you'd have to do a large chunk of a lap (if not the entire thing) very quickly without leaving the road. Those things could become lessons in masochism, as you'd have to be near-perfect with no real room for error for 90 seconds, two minutes, more. Expecting something like that, I was fully prepared to come away with an impression along the lines of "It's goodif that's your sort of thing" 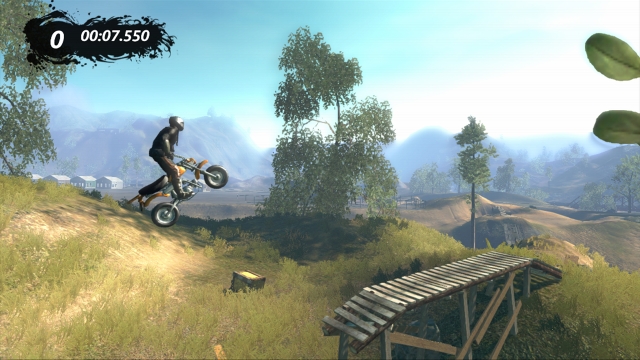 Five hours later, when I turned off my 360, it was obvious that I couldn't take a dismissive tone towards Trials Evolution. I'd done a number of the single player campaign's tracks (of which there are 60 or so) and fiddled around with some of the online options and loved every minute of it. But, like I said, this is a simple game, so I figured that after doing the same stuff over and over again, I'd come to the conclusion that this is a fun game without much of a shelf life.

And now, here I am, hooked on Trials Evolution like you wouldn't believe. I might not be that good at it, but I'm determined to get better. There's just too much stuff to enjoy here. Too much stuff I haven't unlocked or am not skilled enough to get through. If I don't see everything, at least it won't be from lack of trying.

You see, the thing is that simply finishing courses isn't enough if you want to reach the really tough ones -- you have to be good at them. You unlock higher levels of tracks by earning a certain number of medals. Just finishing a course gives you a bronze, which counts as one. To get silver (two) and gold (three) medals, though, you have to avoid crashing your bike, while completing the course in a certain time. With a number of tracks, you just have a bunch of simple jumps where the main challenge will be nailing the landings so you're not off-balance when it's time for the next leap. Later on, things get much more complex, as you'll have to navigate steep inclines, loops and very complex arrangements of jumps and obstacles. 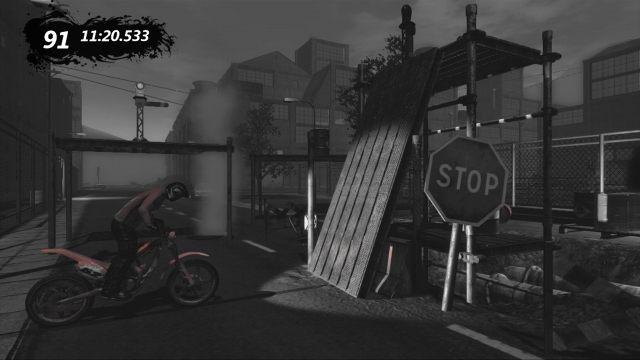 By the time you've gotten a few series into the game, you'll need to start getting a bunch of silvers and probably a few golds if you want to continue unlocking courses. Right now, I need 75 medals to unlock the next group of tracks and then I'll need 100 to get the final set. The first of those numbers seems reachable, as there are plenty of tracks I can see me improving to gold-level without much difficulty. The latter? Well, I'm going to have to find a way to perfectly run tracks that utterly brutalized my biker during my first stab at them. Hell, I'll be happy if I just FINISH the Gigatrack course. Just thinking about running it perfectly seems so unrealistic that I don't even know why I'm considering it a possibility.

At least there are other ways to get medals. As you progress through the game, you unlock a number of skills courses which range from biking courses with handicaps like not being able to brake to tasks like landing a U.F.O. on a number of platforms or rolling a ball along a narrow path. Some are fun, some are blah, all can help me bolster my medal collection. As you unlock more courses, you also unlock tournaments, which are collections of multiple tracks that must be done in sequence. Yeah, getting good medals here will be rough. If I struggle to complete courses with no faults, I'm sure I'll have nooo trouble doing four or six in a row without mistakes.

But whenever I get bummed out by my lack of success, I have plenty of diversions to mess around with. Trials Evolution boasts quite the robust online experience thanks to a track editor that gives players access to all the tools used to make the game. There's already a ton of fun tracks to download. In the span of a few hours, I rode on courses inspired by classic games like Super Mario Brothers and Castlevania; while also getting addicted to a neat take on Skeeball. And I also found a good number of beginner- and easy-level fan-made tracks to practice my skills. That's probably the neatest thing about this game's online stuff -- I could see me easily getting frustrated by a bad night or two and putting this game up if I only had the single-player tracks to constantly ride over and over again in an attempt to get the gold. Instead, I can simply switch over to the online tracks and play a few I'd never seen before to get my head back into things. YeahI can't see me putting this one down for a long time. As long as people remain interested in the community, there will be a near-unlimited number of tracks for me to choose from. Like I said, I want to get better at this game. There's so many user-made tracks I'd like to try, but know their "hard" and "extreme" labels mean I'd just be in for an episode of emasculation at this point in time.

The best part of all this is the price, though. Trials Evolution is a Live Arcade release, so it only costs $15. This might make it the single-best value I've ever experienced. There's a long single-player campaign that will take a lot of work for most anyone to get through, let alone master. Add that to multiplayer options (something I haven't even delved into) and all the online levels and there might be an infinite amount of play value here. At least it feels like it when I'm scrolling through online tracks and constantly seeing new ones pop up whenever I go back to the menu after playing one.

Now I just need to get a little bit better

If you enjoyed this Trials Evolution review, you're encouraged to discuss it with the author and with other members of the site's community. If you don't already have an HonestGamers account, you can sign up for one in a snap. Thank you for reading!

© 1998-2021 HonestGamers
None of the material contained within this site may be reproduced in any conceivable fashion without permission from the author(s) of said material. This site is not sponsored or endorsed by Nintendo, Sega, Sony, Microsoft, or any other such party. Trials Evolution is a registered trademark of its copyright holder. This site makes no claim to Trials Evolution, its characters, screenshots, artwork, music, or any intellectual property contained within. Opinions expressed on this site do not necessarily represent the opinion of site staff or sponsors. Staff and freelance reviews are typically written based on time spent with a retail review copy or review key for the game that is provided by its publisher.