Its too early to call this race, the announcer enthusiastically tells me as my car limps forward from the starting line and my AI competitors car roars into the distance.

No crap, I mutter, censoring myself because Im afraid of the neighbor hearing me say anything more through the paper-thin walls in the apartment complex where Im playing the game. Besides, I cant curse too loudly because the races sloppy opening is no ones fault but my own. I should have revved the engine more. 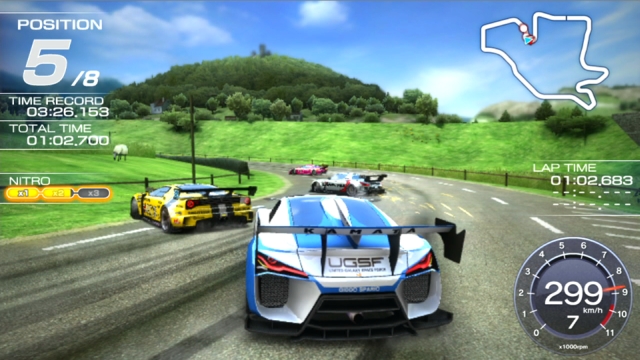 After that inauspicious start to my racing day, I will go on to race three laps that consist of gradual turns and the occasional sharper corner. I will drift around bends, filling my nitrous kit with energy, and sometimes I will boost like a crazy fool. Usually, I will pass any opponents by the end of the first lap. Those fake racers will be choking on digital fumes for the remainder of the race because Ridge Racer is for the most part a fairly simple game.

At launch, Ridge Racer comes with a grand total of three tracks, like the very first game in the long-running series of arcade racing titles. Three tracks wasnt much back in the heady PlayStation days (The Need for Speed soon doubled the number) and its an even less impressive selection now. Fortunately, the game also comes with a card that includes a download key--good through December 31, 2012--so that people like me who want more tracks can snag a few of them at no extra cost along with more cars (which serve no purpose that I could see, except that they look a little different from one another) and some additional musical selections. The added content currently adds two tracks, but a third is planned as part of the Gold Pass and will bring the number of tracks in the game to a hefty total of six.

I cant believe Im saying this, but those tracks are all too easy. Im not one of those guys who demands crazy abuse from my racing games. I like a Sunday drive as much as your grandmother might, but I also like tracks that allow me to feel as if I have triumphed over something. Drifting through switchbacks is great fun, and a string of hairpin turns in rapid successions is the sort of environment that makes drifting the amazing phenomenon that it has become. In Ridge Racer, though, none of the tracks--even the two bonus ones--include more than a few corners that you might call sharp. Old Town, one of the added tracks, includes a single S curve near its conclusion that is an example of the sort of thing that should have been more common throughout the game. In the standard Highland Cliffs track, youll round one corner overlooking a field, and as you finish skirting that pastoral scene, youll launch briefly from a small bump and likely turn in the air before landing and proceeding toward a canyon. Its a neat moment. Otherwise, the tracks are full of the sort of turns that will almost never catch you by surprise, especially once youve memorized them. With only five tracks available, that memorization shouldnt take long. There actually are only a few ways to race on each track, as well. If youre playing offline, your options are World Race (where you can go up against a ghost AI), Spot Race (where youll compete with 7 other computer opponents) and Time Attack (where youll race 30 laps in an attempt to secure the best possible lap time). If you play online, you can also find real-world opponents and race on those same tracks, or download and upload ghost records.

Whether youre playing alone or with a stranger on the Internet, the game awards you credits and a single point for each race completed. If you win a single race offline, thats 110 credits (or perhaps more online). If you lose while playing offline, youll still gain 100 or so (less against a real person).

Credits can be spent unlocking nodes on an upgrade graph in your Garage. You can paint cars and adjust their transmission, but mostly customization is limited to tweaks you make as you unlock upgrades. The problem is that each node you unlock on the graph costs 400 credits. Some of the nodes will give you an upgrade of a certain type--you can affect your starting speed off the line, your slipstream capabilities or your nitrous configuration, for instance--and you can have a single upgrade equipped at once from each of the three lettered categories: A, B and C. What sucks is that not every node you unlock actually gives you something. Some nodes give you a tip, and some are just blank. You can tell that ahead of unlocking a node, but you cant be sure what sort of nodes youll find on any of the available paths you might choose to follow along the grid. So you could wind up unlocking four successive nodes along a single path--or even more, if youre impatient and trying the various paths in an alternating manner--without gaining anything. As far as I can tell, the empty nodes exist to keep you playing through the same few races. Elsewhere, the game awards trophies to those who win 50 ghost races, plus there are separate trophies for winning that many spot races and online matches. Clearly, youre supposed to race through the same few tracks a bunch of times. Besides credits, youll also earn the aforementioned points as you complete races. Those points can be used to boost your reputation, or the reputation of the team with which you align yourself at the beginning of the game (while also allowing you to go up against more tenacious AI foes in the spot race events and more skilled human opponents online). Theres a kind of neat setup where your team competes with three others throughout the online world, and theres a leaderboard so that you can tell how your allies are doing against rivals. This is no doubt intended to foster a competitive environment that makes each race more exciting, but I didnt personally find the online races any more dramatic than the offline ones. I kind of liked knowing that I was ruining someone elses day by winning races against him (or her, for all I know), mostly because Im so rarely a dominant player in racing games. It felt good to know that all that practice at least got me somewhere. Other than that, though, Im not sure the teams aspects added all that much to a game that really needed something.

None of that is meant to suggest that I had no fun with the game, though. Its a Ridge Racer title, after all. Visuals are crisp and fun to look at on the Vitas OLED screen, the music is great and the announcer is well, hes enthusiastic as he says stupid crap. You can turn down the volume if you like. My biggest issue with the game was the lack of substantial content. That flaw will likely go away in time, with additional downloads that are almost certain to make their way to the Sony Entertainment Network (for a price), and I have no problem recommending a purchase right now if you can get it a good deal on it. This is a solid racing game, as far as it goes. Theres just not enough of it.

If you enjoyed this Ridge Racer review, you're encouraged to discuss it with the author and with other members of the site's community. If you don't already have an HonestGamers account, you can sign up for one in a snap. Thank you for reading!

© 1998-2021 HonestGamers
None of the material contained within this site may be reproduced in any conceivable fashion without permission from the author(s) of said material. This site is not sponsored or endorsed by Nintendo, Sega, Sony, Microsoft, or any other such party. Ridge Racer is a registered trademark of its copyright holder. This site makes no claim to Ridge Racer, its characters, screenshots, artwork, music, or any intellectual property contained within. Opinions expressed on this site do not necessarily represent the opinion of site staff or sponsors. Staff and freelance reviews are typically written based on time spent with a retail review copy or review key for the game that is provided by its publisher.