If you wanted to get a PlayStation Vita on the 15th of February, a full week ahead of its standard launch in North America and Europe, you had to purchase what was called a first edition bundle that included a 3G version of the system, a carrying case, a 4GB memory card and a retail copy of Little Deviants. That effectively made the game the systems first pack-in, which clears the way for it to be called one of the worst pack-in titles the industry has ever seen.

Little Deviants is a thoroughly disappointing game. It tries to showcase the incredible hardware that is the Vita, but no system needs a showcase like this. Shallow, frustrating and generic, the game is a mediocre slog interrupted only occasionally by diversions that are closer to tolerable. 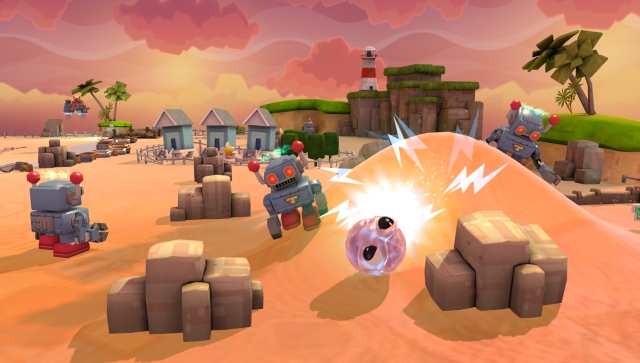 The game gets its name from the slimy creatures youll control once you start playing. Called deviants, the critters are a lot like Ubisofts rabbids, only uninteresting. They are drawn in a similarly deformed style, but they lack any sort of personality. Youll start with only one deviant at your disposal and youll unlock more of them as you play, but theres not much point since you cant even select which deviant you want to see serve as your avatar; your selection is automatically made for you depending on the mini-game that you choose.

Little Deviants is nothing more than a collection of mini-games. While mini-games tend to make for enjoyable gaming when you can play them against friends in something like Mario Party, here the best you can do is rank on the leaderboards and then brag to a rival if your performance tops his. Theres no proper multiplayer mode. Your choices from the menu are Story and Games. Youll have to play the former mode first to unlock the games that will appear in the second mode. Theres not actually a story, though; you just tap the screen to select one of six regions from the map, then tap it again to choose the available mini-game that interests you in that region. As you clear mini-games with a bronze trophy or better, youll access additional regions and mini-games, as well as some boring artwork (if you finish with a silver trophy or better). Youll eventually be able to choose from a total of 30 mini-games, if youre good enough at fiddling around with the Vita to unlock them all.

As youve likely read or personally experienced, the Vita features a wide variety of input options. These are utilized throughout the various mini-games. One early stage puts the camera to use. As you play, you can see your real-world surroundings represented on-screen, thanks to the Vitas camera. Alien ships will fly around the screen, attempting to capture your deviants. You have to move the Vita around to aim crosshairs so that you can blast your foes out of the sky before they abduct your buddies. Its a difficult mini-game to play in a confined space, since youll have to swing the system wildly to find some of your enemies, then swing again to track their rapid movement. Youll get quite a workout in the process. 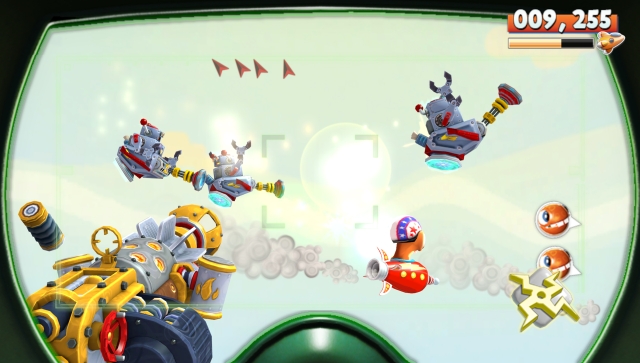 In another stage, youre presented with a grassy field. There are fences and such around its edges, and stars and enemies and keys scattered across its surface. To win the game, you have to collect one or more keys to open a portal. Snagging goodies along the way can add to your score, but brushing against enemies, projectiles or electrical barriers will drain a life meter and potentially cause your deviant to perish if you dont find healing items in time. To control everything, you must move your finger along the track pad located on the Vitas back side. On-screen, a grassy mound appears about where your finger is located. You must move that mound around so that your deviant rolls where you want him to. Until you adapt to the unusual control scheme, its easy to push your character in the direction opposite the one where you want him to go. There are cases where precise timing and turning are required to sneak through narrow gaps or to avoid hazards, which can make for a frustrating experience.

Some of the more memorable and pleasant stages are the ones that rely on motion controls. In some levels, youll need to hurry toward a goal before time expires, which is done by tilting the Vita unit to roll your deviant around like a marble from Marble Madness. There also are some race stages, where you must stay ahead of a mechanical beast that is in pursuit. As you fly or swim through a stage, youll have to avoid natural hazards that can slow you down, all while collecting stars to improve your score and items that will grant you temporary speed boosts. Elsewhere, tilt controls allow you to dive through twisting caverns while avoiding natural hazards so that you can diffuse hidden bombs.

Little Deviants could have been a decent game, even without a multi-player component, but the mini-games are often challenging because of their imprecise controls, not thanks to designer ingenuity. Its difficult to forget that most of what you find here wouldnt be nearly as difficult if it used the available analog stick rather than forcing you to play around with the Vitas more unique features. Stages are vanquished, not enjoyed, and your only reward is more of the same sort of experience (but often with complications that make it all even less fun). 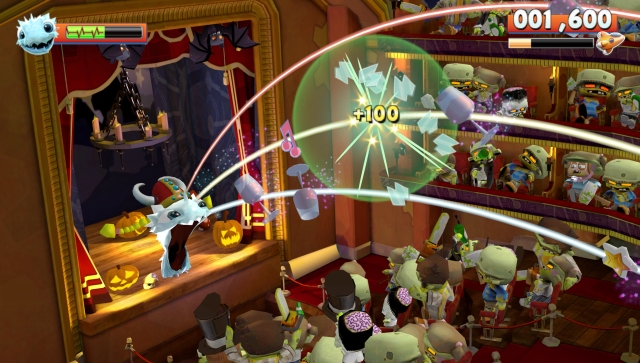 One of the most frustrating mini-games becomes available around two-thirds of the way through the game, after you free another deviant type. Hes capable of leaping and gliding through the air, so youll be presented with a stage that presents you with a bunch of floating platforms that are viewed from overhead. You have to hold the Vita in a vertical position and tilt it to move a red circle around on the screen that lets you know where your character will land. Your deviant hops automatically, and you must keep him from brushing against robots or falling into the abyss. Finicky hit detection and unresponsive tilt controls make it difficult to score even 10,000 points before you lose your last life, let alone the minimum of 20,000 points that are required to clear the stage.

Another irritating mini-game forces you to whistle or hum into your Vitas microphone, which rules out playing in a library. Your character stands along the left side of the screen as objects fly toward him. You must produce and maintain noise at one of three pitches to emit notes that will shatter flying objects such as bottles and wine glasses. Whatever your vocal range, it can be difficult to hit the right notes while humming, and the audio detection for whistlers is even worse. Youre likely to be left breathless and disgusted by the time you manage to clear the stage, plus everyone in your immediate vicinity will probably have an opinion or two about your ability to hum or whistle annoyingly.

The Vita is capable of incredible gameplay and will likely play host to a variety of compelling experiences in the coming years. With any luck, Little Deviants will go on to be remembered as the absolute worst first-party title ever released for Sonys handheld. If you have $30 to spare, spend it on something that wont leave you feeling Vita buyers remorse.

If you enjoyed this Little Deviants review, you're encouraged to discuss it with the author and with other members of the site's community. If you don't already have an HonestGamers account, you can sign up for one in a snap. Thank you for reading!

© 1998-2021 HonestGamers
None of the material contained within this site may be reproduced in any conceivable fashion without permission from the author(s) of said material. This site is not sponsored or endorsed by Nintendo, Sega, Sony, Microsoft, or any other such party. Little Deviants is a registered trademark of its copyright holder. This site makes no claim to Little Deviants, its characters, screenshots, artwork, music, or any intellectual property contained within. Opinions expressed on this site do not necessarily represent the opinion of site staff or sponsors. Staff and freelance reviews are typically written based on time spent with a retail review copy or review key for the game that is provided by its publisher.