Are you a hopeless dork? A real pathetic loser? Do your nights of great lays involve a bag of potato chips? Well take heart, for youre not alone! Come along with Larry Laffer, socially inept computer programmer turned socially inept polyester paramour and the original 40-year old virgin, as he bumbles around the seedy city of Lost Wages looking to finally get laid!

Released at a time when virtually the entire genre consisted of family-friendly fantasy quests, Larrys misadventures are set in the real world and ready to explode with wads of raunchy adult-themed humor. Even today youd be hard-pressed to find a game that has you getting flashed by trenchcoat-wearing perverts in front of the Quiki-Wed shotgun wedding chapel, building up your self-esteem (not to mention some other things) on a deluxe model inflatable woman, or getting down and dirty with an inexpensive prostitute wholl bite your miniscule member clean off if you had the temerity to type eat pussy. 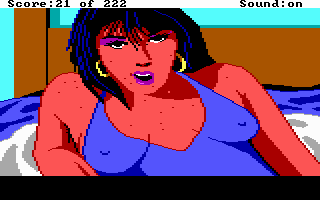 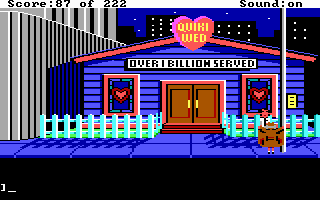 Speaking of which, the text parser is pretty clever and recognizes some rather colorful ideas like a little masturbation: Larry, the whole idea was to stop doing that! The descriptions whenever you examine something are often just as amusing, informing you This is the hookers seedy bedroom. The beds a mess, ditto the hooker! or that the bartender appears to be perverted, twisted and sick! You instantly take a liking to him. But most importantly the puzzles are all solid and not overly difficult to figure out even if a few of them suffer from adventure game logic, like a drunk slouched outside the bathroom handing you a TV remote if you ply him with booze. And while the humor can get pretty risqué the actual graphics are far from explicit  Naked Larrys just a grinning orange blob and your inept pawings are always obscured by a big black CENSORED bar as it thrusts up and down.

Unusually for an adventure game, virtually all of the locations are accessible right from the beginning, but since only a few screens in each area are actually connected youll frequently have to hail a taxi as you travel back and forth around the city. Since things like cab rides and plaid, peppermint-flavored, extra-small condoms cost money, youll also have to keep an eye on your cash flow and repeatedly hit the casino to play blackjack or slots. Admittedly this is (not so) secretly a cheap way to pad out a fairly short game, but at least its not one of those damn arcade sequences. Every so often youll also want to break out the breath spray if you dont want everyone to know your mouth smells like a sweaty pair of gym socks, and standing around in one place for too long typically results in a little black dog trotting over to relieve itself on our heros leg. 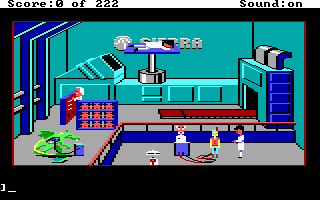 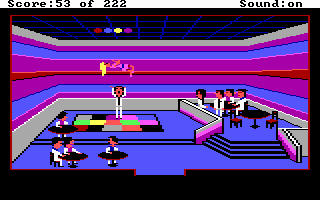 Of course it just wouldnt be a Sierra game if there werent countless ways to die horribly thrown into the mix, and like many of their better efforts these feel more like easter eggs rewarding willful stupidity than something to be avoided. Whether getting mugged in an alley and sent back to the Quality Assurance department for a replacement protagonist, or having your genitals explode after forgetting to slip on some protection, when youre not too busy trying to get off youll be trying to get offed.

Unlike some other vintage games, Land of the Lounge Lizards doesnt just represent a considerable departure from the standards of its day, or the beginning to one of Sierras most recognizable franchises, or even one of the most heavily pirated floppies in computer history  its still among the best games in the series and a must-play for all fans of graphic adventures and hilarious filth alike. Larrys fashion sense may be permanently stuck in the 70s, but his first outing isnt likely to ever go out of style. 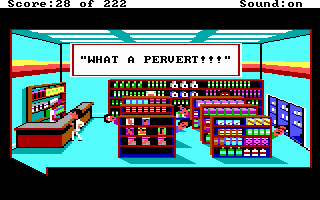 If you enjoyed this Leisure Suit Larry in the Land of the Lounge Lizards review, you're encouraged to discuss it with the author and with other members of the site's community. If you don't already have an HonestGamers account, you can sign up for one in a snap. Thank you for reading!

© 1998-2021 HonestGamers
None of the material contained within this site may be reproduced in any conceivable fashion without permission from the author(s) of said material. This site is not sponsored or endorsed by Nintendo, Sega, Sony, Microsoft, or any other such party. Leisure Suit Larry in the Land of the Lounge Lizards is a registered trademark of its copyright holder. This site makes no claim to Leisure Suit Larry in the Land of the Lounge Lizards, its characters, screenshots, artwork, music, or any intellectual property contained within. Opinions expressed on this site do not necessarily represent the opinion of site staff or sponsors. Staff and freelance reviews are typically written based on time spent with a retail review copy or review key for the game that is provided by its publisher.