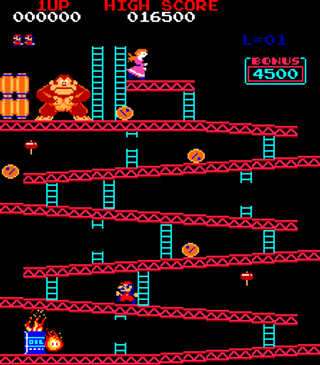 The problem with the beginning is where do you begin.

Theres the trial lawyer that did his homework and wouldnt back down, making monkeys out of magisterial multimillionaires, flexing the muscle of small foreign companies in an emerging American medium and vaulting himself to senior vice president of the biggest name in gaming. Theres the renowned creator, still fresh out of college, that boldly scoffed at minor modifications to Nintendos flopping Galaxian-wannabe, Radar Scope. And those are just branches of the real story of Donkey Kong: the iconic mascot of an industry, debuting not even under his real name, and his rescue of a damsel from the clutches of a girder-climbing gorilla.

Its a four directional joystick, a jump button and 100 meters of interlocking iron framework spanning four distinct single screens that changed the face and faces of gaming forever. Donkey Kong is firmly entrenched as the most important title in the history of the arcade, ushering in Nintendo, proving gaming companies couldnt be bullied by American entertainment conglomerates and introducing a timeless ascent into the classic gaming world.

A carpenter by trade, the legendary Jumpman, who with his fame dropped the alias and became the ubiquitous Mario, watches as his first girlfriend Pauline (Lady to Japanese audiences) is kidnapped by a darned dirty ape and taunted out of reach. The oversized giant has carried her perilously up a construction site and his furious stomping is legendary, collapsing the red iron girders in a fashion that allows him to roll wooden barrels down into the heros path. Jumpman must make his way up the series of girders and ladders, hopping barrels and avoiding butane balls, with the option to snag a hammer and smash his obstacles on two different floors.

The simplicity cannot be understated or overstated. But for the first time, an underdog hero seemed to emerge, someone with realistic means of disposing of obstacles and limited skill in a world then dominated by spaceships and yellow gobbling monsters. Hes a modest man; theres nothing super about Mario at this point. It is with wit and cunning that he perseveres, predicting when a barrel is coming, alert of their dangerous potential shortcuts down ladders, and in tune with all his hazardous surroundings. Enter randomness  events cannot be predicted in Donkey Kong, and the hero must find his way out of dire situations with deftness like an action movies lead. The great ape tries to put the heros back against the wall, hurling beams that clatter down randomly and barrels with increased ferocity each round. Jumpmans mettle is put on trial during every ramp round, as he struggles uphill against a gargantuan competitor trying to keep him down.

Howard Lincoln was not about to buy the Brooklyn Bridge, he told the MCA lawyers presenting the American entertainment giants case against Nintendo. Lincoln started at Nintendo rewriting a contract for Al Judy and Ron Stone, then the sole American distributors of Nintendo arcade games, and quickly found enough work within the company to fill his time almost exclusively when Donkey Kong exploded in the American market. He acquired the copyright. He was negotiating contracts with Colecovision for console distribution rights. By 1982, he was taking pirate and bootleg companies to court for illegal production of the game.

MCA Universal contended that Donkey Kong was an infringement on the King Kong likeness, a great ape of the same lineage climbing a skyscraper as in the movies finale. But their reaction to Lincolns curious approach in asking for proof may have given away the bluff. MCA president Sid Sheinberg was used to having his way. When Lincoln and Nintendo of America president Minoru Arakawa graced his office, he expected a settlement and a chance to buy MCAs way into the new market, as it did when Colecovision earlier settled concerning console production of the title.

We have no intention of settling, said the former bluejacket firmly. Sheinberg was incensed. 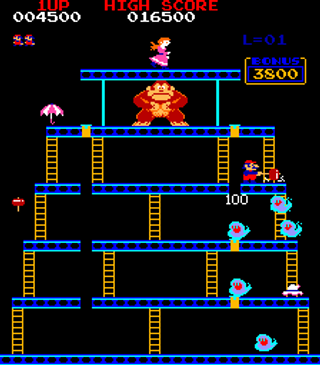 A fact easily forgotten after so many console iterations is that the ziggurat level is the second level of Donkey Kong, that the first round is in fact only two stages and fifty meters. Eight rivets support the blue steel structure with Donkey Kong guarding Pauline at the apex. Pauline has lost her lunch pail, telephone and parasol and Mario can acquire these items scattered around the structure for bonus points. Two hammers hang midair, one suspiciously out of reach, but fearlessly take the leap and Mario will bounce back off an invisible barrier mallet in hand. Three to four ladders connect each floor, providing plenty of escape routes that will prove vital.

The first time it may seem tame, but conquering the foxfires that materialize and zigzag about the ziggurat requires skill and forethought, removing rivets in a fashion that neutralizes their movement (they cant pass over the gaps, while Jumpman leaps with ease) and utilizing hammers to clear them to the opposite side of the screen. The foxfires will move left, then juke back right just when the coast looks clear. Theyll weave perilously above as you hope they dont make a break down a ladder and onto your tail. The foxfires taunt and deceive, and it is only Jumpmans craftiness and dramatic timing  making the daring move when its most advantageous, that leads him to succeed. 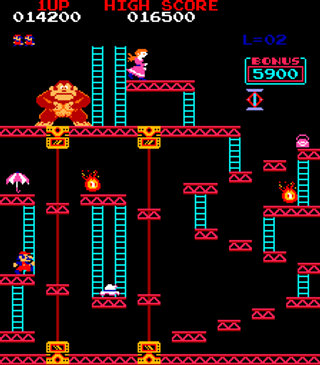 Shigeru Miyamoto loved video games, the Pong and Space Invaders themed titles that grew to popularity while he was in college. Hired as an artist by Nintendo in 1977, Miyamoto helped design early Nintendo titles such as Sheriff and Radar Scope, the latter of which sold fine in Japan, but failed in an American market oversaturated with similar concepts. With numerous unsold units sitting on western shores, Miyamoto was tasked with the conversion of the machines to something that would sell.

Radar Scope wouldnt do. Miyamoto wondered why video games couldnt tell a story, why they limited themselves, why themes were always the same in so many titles. Games were designed and storyboarded on the fly or afterwards  Donkey Kong was planned out start to finish first. In a bold move, the entire Radar Scope software was scrapped, as Miyamoto asked engineers what could be done on the hardware, what actions a character could be programmed to have. Donkey Kong was almost Popeye, but negotiations for the license fell through. Instead, Miyamoto ran with the idea of a man unkind to his pet ape, and the day that ape took his revenge and stole his bride. It was amusing. It was a comedy. With Nintendo on the brink of financial collapse in America, this was its last chance effort. 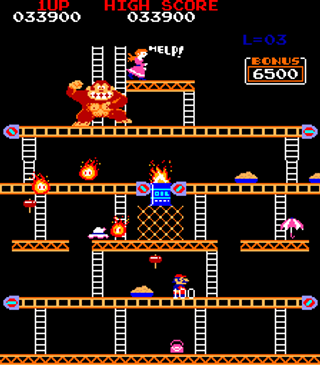 Round two through Donkey Kong introduces the elevator level, the first showcasing of the refined design of the title. Mario starts on the bottom left and finds a hodgepodge of obstacles between himself and his destination, many trickier than they first appear. Two elevator lifts  one up and one down  border an island of two platforms connected by two ladders. Mario must time his jumps onto the lifts  he cannot fall more than twice his height  while not being crushed when the elevators disappear off screen. To add anxiety to the timing, a foxfire roams the small island, climbing up and down the ladders. On the other side, hell have to deal with bounding springs that hop across the top platform his nemesis guards before falling down into his route. Mastering the spring pattern  knowing when it is safe to make that dangerous final climb to the top-most platform  is the mark of a dedicated champion.

Round three brings the conveyor belt level, the toughest level for new players and the easiest for the experienced. The first trick is to wait for all three foxfires to emerge from the flaming oil drum  theyll always exit to the side Jumpman is positioned on. Climbing the first ladder, he can make his way up on the right side with minimal hassle, only having to jump the concrete tubs on the moving conveyor belts with some luck. Getting the hang of the conveyor platforms takes practice, waiting on the retractable ladders near the summit patience and dodging the foxfires pattern recognition. Combining all three with the constant action provided by the hazards and the randomness that comes with each play is the formula behind this arcade legends consistent success. Donkey Kongs early greatness becomes obvious to players that have traveled this far, no easy feat in the challenging title. 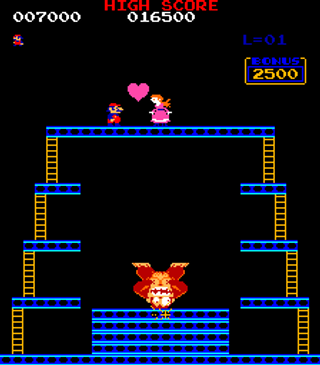 Miyamotos game was a hit  despite initial skepticism, Donkey Kong was so fun and so different it won over the masses  so much so that Lincolns legal efforts proved crucial. MCA didnt own the copyright to King Kong  they had even established that themselves in a ruling years earlier, when they won a suit against RKO General, Inc. proving King Kong was in the public domain. It was utterly foolish bully tactics all along. Universal sued anyway, losing appeal after appeal, as Nintendo was awarded damages for broadly asserted rights Universal didnt have, coercion of third party licensees from marketing the game, and usage of the court system for financial benefit. Sheinbergs legal profit center was exposed.

Today we look at one action button as decidedly simple, but what it accomplishes in Donkey Kong does more than map a single action with a single goal. You can jump to dodge. You can jump to advance. You can jump to grab a hammer to smash, to push ahead on a conveyor belt for traction, to deceive foxfires, or just because you want to jump for style. The action is mapped only to the goal of advancing through the cleverly designed setting, advancing a comedic plot complemented by an unforgettable assortment of amusing sound effects, from the alarming buzzer at the get-go to Jumpmans legendary noise when leaping.

Donkey Kong not only established a legal standard that kept the large entertainment companies at bay in the industry, but provided a design-and-story-centric model that began producing some of the best games. Its importance to the arcade too often goes unrecognized; this is the most important game in its history, and shines still as a crowned jewel to this day.

If you enjoyed this Donkey Kong review, you're encouraged to discuss it with the author and with other members of the site's community. If you don't already have an HonestGamers account, you can sign up for one in a snap. Thank you for reading!