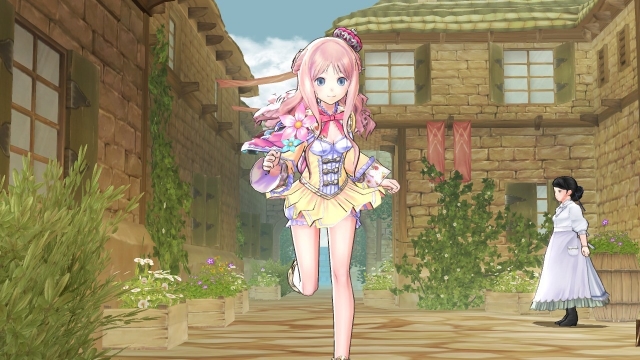 Unemployed alchemists have had it worst of all in today's job market. Many alchemy workshops require at least two years of prior experience, and, without experience, there are few opportunities to learn. Thankfully, NIS America is bringing the latest alchemy sim to western audiences. With Atelier Meruru, the third Alchemist of Arland game, American alchemists will be able to get that much needed training.

Atelier Meruru stars the young Princess Meruru of the kingdom of Arls. Upon meeting the adventurous Totori Helmold, the protagonist of the previous game, Meruru decides she wants nothing more in life than to become a great alchemist. In her travels, she will use alchemy to build her kingdom and discover what life is like outside the castle walls.

Though it brings back the same alchemy and adventuring players have come to know and love, as well as the lovable Homs, several changes have found their way into Atelier Meruru as well. The new "development" system lets players add facilities and areas to their kingdom, expanding it and affecting the ultimate outcome of the game. Battles, too, gain depth through the new Time Card system.

Alchemists-in-training can have this light-hearted PS3 adventure in their hands next spring, when it makes its way to stores in North America and Europe. Turn-based battles, item fusion, and familiar faces all await in Atelier Meruru. The series already has a cult following, and it's certain this isn't the last we'll be hearing about it before its release.

If you enjoyed this Atelier Meruru: The Apprentice of Arland article, you're encouraged to discuss it with the author and with other members of the site's community. If you don't already have an HonestGamers account, you can sign up for one in a snap. Thank you for reading!

© 1998-2020 HonestGamers
None of the material contained within this site may be reproduced in any conceivable fashion without permission from the author(s) of said material. This site is not sponsored or endorsed by Nintendo, Sega, Sony, Microsoft, or any other such party. Atelier Meruru: The Apprentice of Arland is a registered trademark of its copyright holder. This site makes no claim to Atelier Meruru: The Apprentice of Arland, its characters, screenshots, artwork, music, or any intellectual property contained within. Opinions expressed on this site do not necessarily represent the opinion of site staff or sponsors. Staff and freelance reviews are typically written based on time spent with a retail review copy or review key for the game that is provided by its publisher.