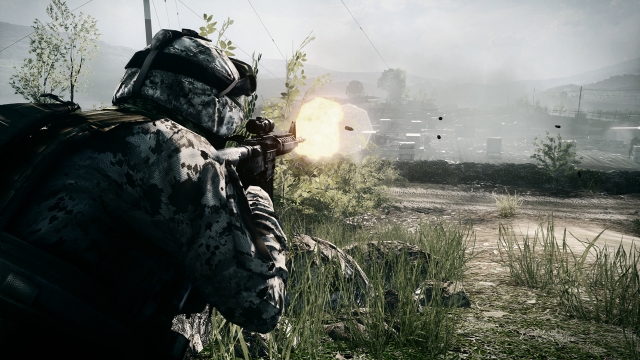 You may be hearing from frustrated gamers who are having difficulty enjoying Battlefield 3 online and off, but that hasn't stopped the game from selling like hotcakes. Electronic Arts announced today that according to internal estimates, Battlefield has sold through five million units in its first week of global availability. That's enough to make it the fastest-selling game in EA's history.

Ever so carefully, Electronic Arts has positioned Battlefield 3 as a Call of Duty killer. Critics responded well too, with the game enjoying an average rating of 85 on consoles and 90 on the PC platform (according to Metacritic as of October 31, 2011). It's clear that hype has been on the game's side.

"From Tokyo to Los Angeles, Sydney to London, millions of fans have been playing all weekend long -- we are overhwelmed by the global response to Battlefield 3," said Patrick Soderlund, Executive Vice President of the EA Games label. "It is extremely gratifying to deliver an entertainment experience that delights our fans, and to have the opportunity to introduce new people to the franchise. Already, we are seeing unprecedented play times and online activity which is very rewarding. This launch solidifies Battlefield as a leading entertainment brand."

Electronic Arts has a lot riding on Battlefield success. The company has tried numerous times to dethrone Call of Duty, including an attempt with last year's Medal of Honor that fell disappointingly flat. This time around, the stakes are potentially even higher as EA looks to excite the world with its "state-of-the art Frostbite 2 game engine."

Battlefield has existed as a franchise since the 2002 launch of Battlefield 1942, and the brand arguably enjoyed its previous peak with the remarkable Battlefield 2 for PC. If sales of this newest installment are any indication, the franchise will be around for another 9 years to come.

It will be interesting to see how Modern Warfare 3 performs in comparison. We don't have long to wait; Activision's newest war epic is scheduled for release on November 8th, one week from tomorrow.

If you enjoyed this Battlefield 3 article, you're encouraged to discuss it with the author and with other members of the site's community. If you don't already have an HonestGamers account, you can sign up for one in a snap. Thank you for reading!

© 1998-2020 HonestGamers
None of the material contained within this site may be reproduced in any conceivable fashion without permission from the author(s) of said material. This site is not sponsored or endorsed by Nintendo, Sega, Sony, Microsoft, or any other such party. Battlefield 3 is a registered trademark of its copyright holder. This site makes no claim to Battlefield 3, its characters, screenshots, artwork, music, or any intellectual property contained within. Opinions expressed on this site do not necessarily represent the opinion of site staff or sponsors. Staff and freelance reviews are typically written based on time spent with a retail review copy or review key for the game that is provided by its publisher.