Nintendo reveals details about the Eldin Volcano area and the Harp in The Legend of Zelda: Skyward Sword 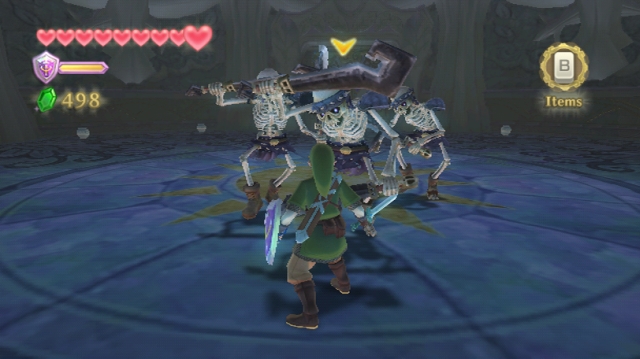 The Legend of Zelda: Skyward Sword arrives at retail on Nov. 20 and Nintendo is already hard at work, building up the hype train for what it hopes will be one of the most successful titles of the holiday season (and a fitting swan song for Wii, ahead of the eventual launch of Wii U hardware). Today, the company revealed some new details about Eldin Volcano, as well as this particular game's connection to music.

Nintendo previously had revealed an area known as Skyview Temple. The Eldin Volcano area that the company unveiled today is the next area Link will need to visit after defeating Demon Lord Ghirahim in that previous temple. In the Eldin Volcano, Link will meet the Mogma, a new race of subterranean creatures. Those creatures will help Link as he explores the fiery realm they inhabit.

While Link is in the Eldin Volcano area, he'll acquire some new items. One of those items will be his first Bomb Bag, an item that should definitely be familiar to anyone who has played a Zelda game from Ocarina of Time onward. The bag permits the collection of Bomb Flowers, which can be tossed or rolled like bowling balls using the Wii Remote. The press release indicates that some puzzle solutions require use of the explosive flowers, which should come as a big "duh" to long-time Zelda fans.

The second item that Link will receive in the area is known as the Digging Mitts. The Digging Mitts work like a shovel, allowing Link to unearth items from the ground in areas that have been marked. To enter the Earth Temple area that Link will soon need to explore, players will have to dig up the pieces that will allow him to open its door.

As for the Earth Temple, Link can ride over the lava on a giant ball. It'll be necessary to balance Link so that he doesn't fall into the molten soup. He'll have to ascend through the area and eventually do battle with Scaldera, a large rock-armored creature who waits at the end.

Finally, today's press release referenced a new musical instrument: the Harp. Link has used music since the very first game, when the Whistle allowed him to warp around the world to dungeon entrances that he had previously visited. I didn't use the thing much because I found it more fun just to wander the familiar map myself and not spend my time guessing which dungeon I'd be carried to next, but it was a neat instrument that had some other special uses in the game (particularly in the second quest). Hopefully, the Harp is every bit as cool. From the press release, it sounds like players will be able to play a variety of songs, as they could with the ocarina in Ocarina of Time.

Nintendo plans to drip feed additional information about The Legend of Zelda: Skyward Sword in the weeks leading up to its release. It sounds like the company is pinning a lot of hopes on this title, even going so far as to offer a special bundle that comes with a gold-colored Wii Remote. Not only that, but every copy of the game's initial run will come packaged with a special music CD containing orchestral arrangements of select songs that will be performed at the upcoming symphony concert.

The Legend of Zelda: Skyward Sword is available right now for pre-order. You can check with a variety of merchants, naturally. I think I'll probably consider an Amazon.com

© 1998-2020 HonestGamers
None of the material contained within this site may be reproduced in any conceivable fashion without permission from the author(s) of said material. This site is not sponsored or endorsed by Nintendo, Sega, Sony, Microsoft, or any other such party. The Legend of Zelda: Skyward Sword is a registered trademark of its copyright holder. This site makes no claim to The Legend of Zelda: Skyward Sword, its characters, screenshots, artwork, music, or any intellectual property contained within. Opinions expressed on this site do not necessarily represent the opinion of site staff or sponsors. Staff and freelance reviews are typically written based on time spent with a retail review copy or review key for the game that is provided by its publisher.