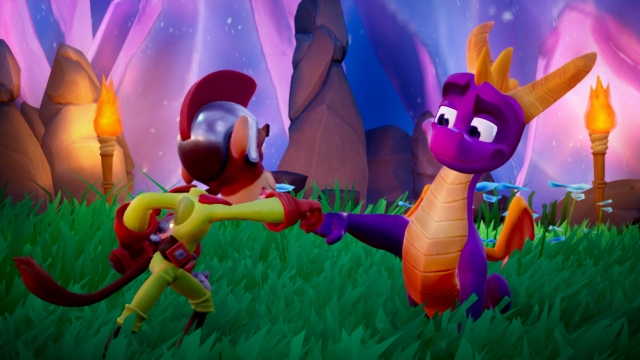 You can already play the game on PS4 or Xbox One. Soon you'll have the option to play it in your office or on the road.

Spyro Reignited Trilogy, a collection of the first three games featuring Spyro the Dragon (more recently of Skylanders fame), is on its way to Nintendo Switch and Steam, Activation reported today. The compilation was previously made available on PlayStation 4 and Xbox One in 2018.

Developed by Toys for Bob, the compilation gathers Spyro the Dragon, Spyro 2: Ripto's Rage! and Spyro: Year of the Dragon. The series was created by Insomniac Games and was one of the early successes for Sony's PlayStation hardware.

According to Activision, Toys for Bob is handling the port to Nintendo Switch, after its work on the PS4 and Xbox One versions. Iron Galaxy has been tasked with porting it to PC.

"Spyro Reignited Trilogy is a love letter to the fans," said Michelle Fonseca, Vice President of Product Management and Marketing at Activision. "Bringing this nostalgic experience to the Nintendo Switch and Steam means that no matter what gaming platform they choose, players will have the opportunity to experience this incredibly fun and iconic game."

The original Spyro games have a lot of fans who remember the good times they once provided, including our own Rob Hamilton (who recently reviewed Sypro: Year of the Dragon). Do you have memories of your own, and are you looking forward to going through the classic adventures once again on Switch or PC?

If you enjoyed this Spyro Reignited Trilogy article, you're encouraged to discuss it with the author and with other members of the site's community. If you don't already have an HonestGamers account, you can sign up for one in a snap. Thank you for reading!

© 1998-2020 HonestGamers
None of the material contained within this site may be reproduced in any conceivable fashion without permission from the author(s) of said material. This site is not sponsored or endorsed by Nintendo, Sega, Sony, Microsoft, or any other such party. Spyro Reignited Trilogy is a registered trademark of its copyright holder. This site makes no claim to Spyro Reignited Trilogy, its characters, screenshots, artwork, music, or any intellectual property contained within. Opinions expressed on this site do not necessarily represent the opinion of site staff or sponsors. Staff and freelance reviews are typically written based on time spent with a retail review copy or review key for the game that is provided by its publisher.